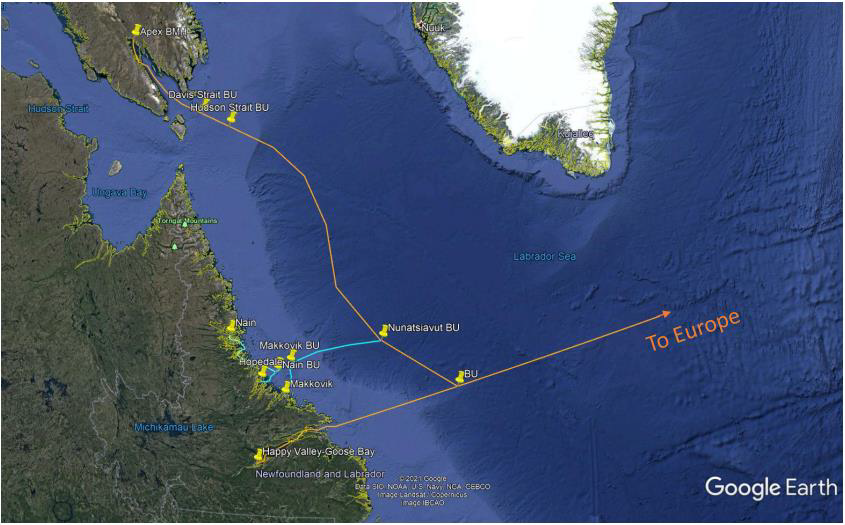 The two companies plan to cooperate on the nearshore cable segment and a common landing point near Happy Valley-Goose Bay.  CanArctic’s SednaLink cable will run 1,904 kilometres from Sheshatsui to Iqaluit with two branches serving Nunatsiavut communities, while Bulk’s Leif Erikson network will traverse 4,200 km of the North Atlantic to provide the shortest route between North America and the Nordics.

Both companies will utilize existing terrestrial networks and construct new networks to provide the lowest latency network between Norway and Central Canada and enable CanArctic to create the first fibre optic network into Nunavut.

Merete Caubet, Vice President Sales & Business Development of Bulk Infrastructure A.S., said the proposed Leif Erikson fibre would facilitate connectivity to areas with substantial surplus of renewable energy in data centres in Labrador and Quebec which would directly interface with the Nordic data centres already serviced by Bulk. “Many of the world’s largest social media companies and corporate enterprises have adopted zero-carbon footprints and the Leif Erikson project will enable us to utilize the massive hydro-electric surpluses of Quebec and Labrador with the ample hydro-electric resources of Norway.” Naerbo added, “It’s a lot cheaper to transmit a kilobyte than a kilowatt.”

CanArctic and Bulk independently conducted pre- studies of several routes between Happy Valley-Goose Bay and the deep waters off the Continental Shelf where the SednaLink and Leif Erikson routes diverge and determined that their technical requirements and physical security standards were compatible, and a cooperation would provide substantial capital and environmental benefits.

These new networks will provide high throughput and virtually unlimited bandwidth between The Nordics and Central Canada and enable CanArctic Inuit Networks to bring fiber-optic into Rigolet to serve the communities of Makkovik, Postville, Hopedale, Natuashish, Nain and the mine at Voisey’s Bay before heading north for 1,900 km to Iqaluit, enabling construction of its planned 2,960 km cable to the High Arctic, with possible extension to Thule Greenland.

Merete Caubet, said “many of our international clients have significant activities in Montreal and the creation of the Leif Erikson will enable to reduce their inter-continental latency as well as improve physical diversity on the routes and network nodes.”

CanArctic’s Chief Executive Officer Doug Cunningham emphasized that the cooperation offers the ability to share expertise and result in significant cost savings for both networks, which the Inuit owned company plans to pass on to its customers in Nunavut as part of its “utility cost of service” model.

Madeleine Redfern, CanArctic’s COO stressed that “the pandemic has greatly exacerbated the digital divide in Canada’s north. We’re excited that this international collaboration will ensure our networks can be built faster and cheaper resulting in reliable, stable, secure and more affordable internet connections into Inuit Nunangat as well as bringing vital redundancy to other fiber networks in three adjacent regions and backhaul for upcoming LEO constellations.”

Under Phase 2 the SednaLink backbone will be extended into the High Arctic and Northwest Passage connecting the communities along the eastern and northern coasts of Baffin Island as well as the Baffinland Iron Ore Mine and Nanisivik naval facility in 2024-2025. During the same interval, spur lines will be laid westward into the Foxe Basin and Hudson Bay.