KUALA LUMPUR, January 31, 2011 -Telekom Malaysia (TM) has signed an agreement with NTT Com to invest approximately $140 million in the Asia Submarine-cable Express (ASE). TM will own two of the six fibre optic pairs, effectively holding a one-third stake in the ASE cable system, and build its own cable system, namely the Cahaya Malaysia Cable System.

"The requirement for internet capacity in the last three to four years (in Southeast Asia) has quadrupled," the Malaysian communications provider's chief executive Zamzamzairani Mohd Isa told a news conference. 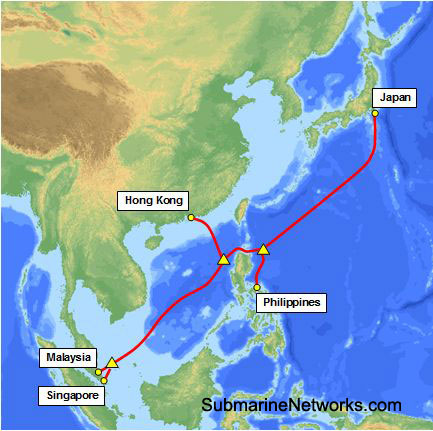 The ASE cable, which will have an initial bandwidth of at least a terabit per second, has a design capacity of up to 15 terabits per second, he said.

The new multi-terabit capacity cable, which has been named Cahaya Malaysia, will initially be about 7,000 kilometres long, covering Malaysia, Hong Kong and Japan, the CEO added.

However, NTT is exploring the option of landing the portion of its cable in Singapore and the Philippines, Zamzamzairani said.

Telekom's investment in the cable is $140 million, which will be funded via internally generated funds, he said.

Singapore communications firm StarHub , which runs wireless broadband and television operations, will be one of the key companies that will subscribe to the cable.

Telekom will also benefit from improved connectivity as it is in the midst of rolling out its high-speed broadband network, which offers its subscribers up to a 20 megabit connection.

The Cahaya Malaysia cable will run parallel to the proposed SJC cable system mooted by a consortium, including the likes of internet giant Google , Singapore Telecommunications and India's Bharti Airtel .

In so doing, the Cahaya Malaysia cable will provide a backup connection should a disruption occur, such as the Taiwan earthquakes in 2006, which knocked out data traffic in the Asia Pacific region.

"Natural disasters have raised the need for a cable system that will provide more reliability," NTT President and CEO Akira Arima told a news conference.

Zamzamzairani said the cable will be constructed by NTT's technology partners, NEC Corp and Fujitsu .