Quintillion Subsea Holdings LLC (“Quintillion”) announced on 18th May 2016 that it has acquired the assets of Arctic Fibre as part of a plan to build a submarine fibre optic cable from Asia to Europe with the first phase in Alaska.

The Alaska segment of the project is the first phase of a three-phase project to connect Asia and Europe through the Arctic. Phase two will be constructed from Alaska to Japan, and phase three will connect Alaska to Europe via the Canadian Arctic.

Construction activities are currently underway in Alaska to complete phase one, which includes the installation of a 1,850km subsea fibre optic cable from Prudhoe Bay to Nome with spurs to the Alaska communities of Barrow, Wainwright, Point Hope, and Kotzebue.

The Quintillion cable system will make available much-needed bandwidth to these communities by early 2017.

In addition to phase one of Quintillion’s subsea system, a new terrestrial fibre optic cable is under construction and will provide connectivity from Prudhoe Bay to Fairbanks, Alaska. At Fairbanks, the fibre will connect to existing networks reaching Anchorage, Alaska and the Pacific Northwest, providing a fibre link between the continental United States and the Arctic. 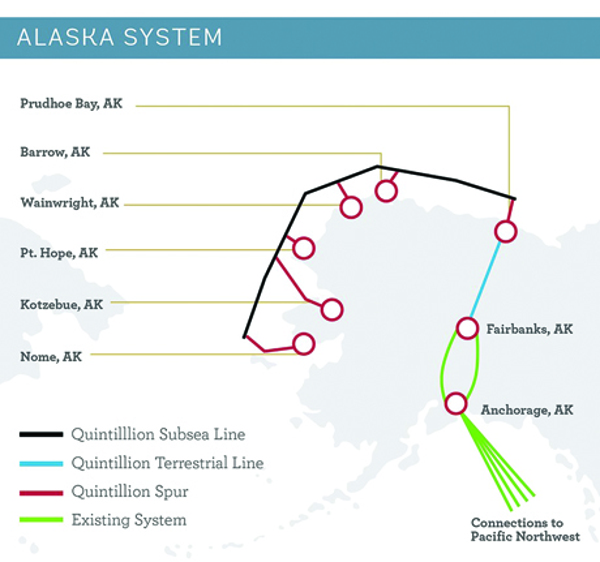 Phase two, the Pacific segment, is intended to extend the backbone cable laid off the Alaska coast west, from the branching unit offshore Nome, to Japan with options for additional spurs into Alaska. Phase two will create additional redundancies of service to the System and open new markets for the project.

Phase three is planned to extend the subsea system from Prudhoe Bay, Alaska east through the Northwest Passage, south of Greenland, across the Atlantic Ocean to the United Kingdom with spurs into select communities in the Canadian Arctic. Once completed, phase three will provide multiple redundancies for the System and open additional international markets.

In connection with the transaction, Oppenheimer & Co. Inc. acted as exclusive financial advisor to Arctic Fibre.