One can never have too much capacity or too low a cost; these have been two significant drivers in telecoms for quite some time. The desire for as much capacity as possible pushed Xtera (www.xtera.com) to develop all-Raman terrestrial systems with 100 nm bandwidth and great reach. However, the high power requirements of all-Raman technology made it applicable mainly to terrestrial and unrepeatered subsea systems. For repeatered subsea systems, Xtera combines low-power Raman with EDFA to get the benefits of both technologies.

There are a number of ways to increasing the capacity within a submarine cable system and I show a simple diagram illustrating three ways to achieve 2x the capacity of a simple EDFA-based system. For convenience I show only a single direction; P is a Pump laser, W a WDM coupler which connects the pump to the Erbium Doped Fibre; the Fibre shown is that in the cable. 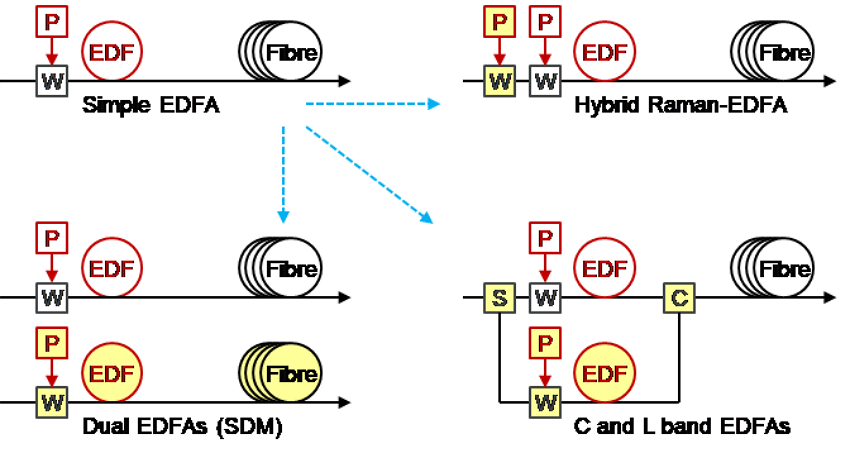 An obvious way to get 2x the capacity is to duplicate the EDFA and fibres – also referred to as Space Division Multiplexing (SDM) – which has fairly obvious cost implications.

Combining C and L amplifiers using a splitter S and combiner C avoids the extra fibre cost, but the system cost of amplifiers is effectively more than 2x, because the WDM splitters/combiners add some loss and thus increase the number of repeaters needed, probably by 5-10%.

The Xtera hybrid Raman-EDFA has less coupler loss than the C+L amplifiers and the amplifier noise figure is reduced, particularly at longer wavelengths. A nice feature of Raman amplification is that it works well with 80 micron fibre, which is significantly less expensive than 130-150 micron fibre.

The cost comparison that I’ve done is a little simplistic; pump cost depends on wavelength, power … and component costs are affected by specification details and the volumes purchased. I also haven’t discussed manufacturing cost where there are some counter-intuitive surprises. Nonetheless, I think the overall argument is reasonable.

There are, of course, other factors to consider. The C-band solution offers the lowest power consumption, with C+L a little worse and the hybrid Raman-EDFA the highest, due to the need for high power Raman pumps. I haven’t shown an all-Raman solution, because the power required is prohibitive. Wavelength modules for the L-band are currently somewhat more expensive than C-band units, a situation which will probably continue until there is significant demand for L-band units. It seems likely that fibre-poor terrestrial routes, or cases where a fibre has to be leased or purchased, will start to produce a demand for L-band modules, as the only solution here is extra bandwidth.

Xtera’s choice of hybrid Raman-EDFA is a good fit for Regional Systems. For example, a 1000 km system with 240 x 200G = 48T needs 14 amplifier-pairs. The dual C-band solution would require 22 amplifier-pairs for the same capacity and would need 2x the fibre. The benefits are clearly visible for systems up 2000 km or more, as shown by Seaborn’s (www.seabornnetworks.com) selection of this technology for the ARBR system https://subtelforum.com/products/subtel-forum-magazine/. Power consumption isn’t really an issue for these relatively short systems, but it’s clear that the hybrid advantage may disappear over transoceanic lengths, as non-linear effects and power consumption tend to become significant. 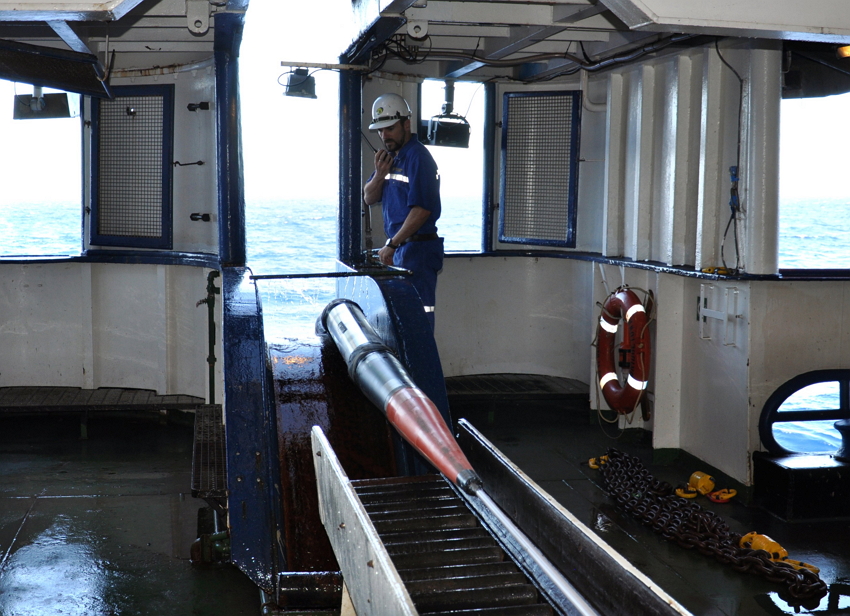 For these longer systems, there is room for a good debate as to whether dual-C or separate C+L is the better solution. Based on power consumption and simplicity, the dual-C appears to me to be the more attractive, but at least one major supplier has chosen the C+L route, suggesting that there are other factors which are important – at least to them. One possibility is that on longer systems non-linearity becomes progressively more of an issue and large-core, low-loss fibre is needed; depending on cost, this might make the C+L solution the more attractive.

I’d be really interested to hear how other people – particularly cable system purchasers – see this question. I am aware that I simplified things somewhat, so I’d be interested to hear if anyone feels that I missed a significant factor.

Tony joined Xtera in 2004 initially managing Marketing and Proposals for terminal equipment and upgrades and then responsible for products such as Repeaters and Branching Units, and now serves as CTO.

Tony started work at BT’s Research labs investigating cable problems and then moved to Alcatel Australia, becoming involved in testing and commissioning submarine systems.  A move to Bell Labs gave him experience in terminal design and troubleshooting, after which he went back to Alcatel France, where he worked in Alcatel Submarine Networks’ Technical Sales before moving to head Product Marketing.