Ciena announced on Monday that the Trans Pacific Express cable network (TPE) consortium has selected Ciena for significantly increasing the capacity of the TPE submarine cable system, using Ciena's GeoMesh 100G submarine solutions, including its new WaveLogic coherent optical processors’ capabilities. The upgrade will deliver TPE cable system with more than triple capacity, as compared to the original design capacity when it first went into service in 2008. The TPE 100G upgrade will substantially relieve the capacity shortage between Korea, China, Taiwan and the US, which will result in substantial price drop for AAG capacity. 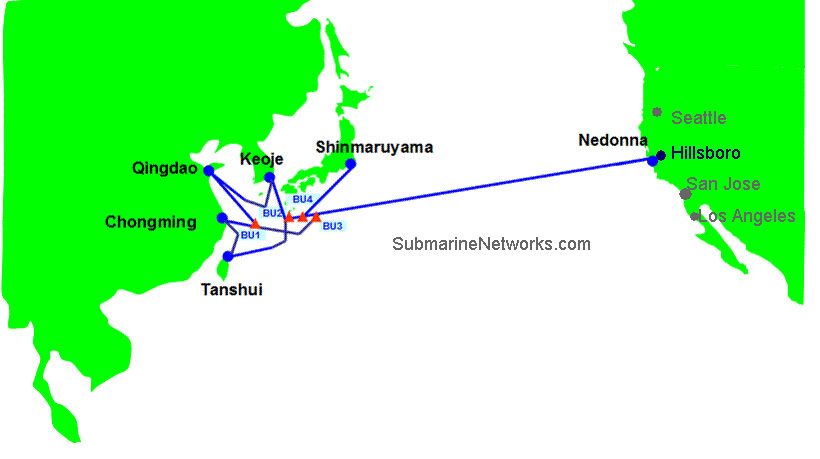 Upon ready for service in 2008, the TPE cable system was designed with DWDM technology of 64x10Gbps, with initial design capacity of 2.56 Tbps over its trans-pacific trunk.

According to Ciena's announcement, the trans-pacific capacity over the TPE cable system will be upgraded to at least 7.68 Tbps, after the completion of upgrade with Ciena's 100G submarine network solutions.

The TPE 100G upgrade will substantially relieve the capacity shortage between Korea, China, Taiwan and the US.

The TPE cable system is the major internet cable for carriers in China, Korea and Taiwan, with express and direct cable route to the US. The initially designed trans-pacific capacity of 2.56Tbps has been almost fully equipped and used up. The TPE consortium members including China Telecom, China Unicom, Chunghwa Telecom and Korea Telecom are all in a shortage of trans-pacific capacity. Most of them have been looking for huge capacity on alternative trans-pacific cables, such as AAG.

Ciena is also upgrading AAG with 100G technology, and the AAG 100G upgrade is expected to be completed in February.

The TPE 100G upgrade may have negative impact to the AAG consortium members, especially those who are trying to sell their AAG capacity to Chinese carriers. I can forecast here that the price of AAG capacity will drop substantially in this year.