Following the landing at Deep Water Bay in Hong Kong in March 2018, PLCN landed at Dockweiler Beach in Los Angeles in November 2018. With tremendous efforts from professional teams of PLDC and the PLCN parties, PLCN has achieved one and another milestone. Being the first cable connecting Hong Kong and US directly, the first C+L bands technology enabled submarine cable system in the world and the largest capacity submarine cable across the Pacific Ocean, PLCN is coming in-service in 2019.

Starting from the second half of 2018, PLDC as the major investor, builder, owner and operator of the PLCN cable system, has been keeping the progress of PLCN project transparent. All information about the PLCN project schedules and the most recent updates have been communicated by emails to our key partners and publicly announced at PLDC’s official website. PLDC welcomes network and capacity planners to contact directly for any updates of PLCN project and include PLCN in your product portfolio.

By the end of 2018, the manufacturing of all terminal equipment, repeaters and cables for PLCN project have been completed and tested with good quality. The installation of marine cable is going on.

The major marine cable installation is conducting with four phases as shown in the following figure. The first phase of 2A segment installation of approximately 1650km cable from shore-end in Los Angeles and westwards has been completed. The installation of 1A segment of about 3700km cable is going on and is expected to be competed in March 2019. The part of 1B/2B segment which is another 8000km of cable has been loaded on board. Last but not least, segment 2C as the final installation, about 1570km of cable across the South China Sea is scheduled to be done in early of the third quarter in 2019. 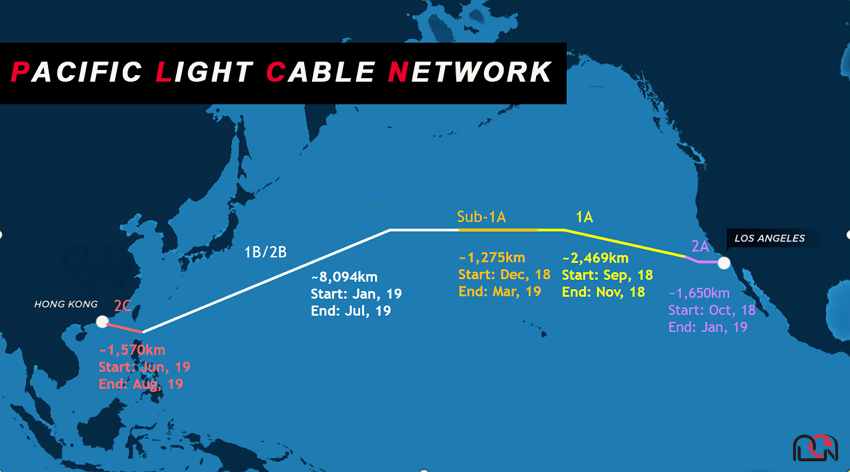 While PLDC sees no obstacles or uncertainties on any permitting issues, PLDC is expecting to launch PLCN cable for commercial service ahead of the current schedule if there will be good weather allowing faster installation.

As a leading capacity planner and IP peering coordinator for a large scale network, I keep good connections with backbone network architects worldwide. I understand many of peers were nervous about their capacity requirement across the Pacific Ocean, from bandwidth supply and diversity points of views. Several of the trans-Pacific systems have been of high utilization and being difficult to supply large scale of capacity between Asia and the US. For examples, the Asia-America Gateway (AAG) connecting South-East Asia, Hong Kong to the US had a final upgrade in 2018, with few capacity available. Another example would be Trans-Pacific Express (TPE) connecting China, Korea, Japan and the US which is almost fully equipped, almost using up its trans-pacific capacity while has been frequent outages in the past years. And the newly completed New Cross Pacific (NCP) is unable to supply capacity to China yet. As for those cables connecting Japan and the US, most of them are of high utilization. Capacity on the latest FASTER cable was occupied even faster than its name implies.

Hong Kong as the heart of Asia, is not only a major internet and transit hub in Asia Pacific region but also an international commercial hub among the world’s leading service-oriented economies. All the Over-the-top (OTT) players and leading internet backbone service providers have set their backbone PoPs in Hong Kong. In 2018, Google opened a new Google Cloud Platform (GCP) region in Hong Kong. In the meantime, Amazon also launched a new  AWS Direct Connect Location in Hong Kong. The other OTT players have also established Hong Kong as one of their backbone nodes even earlier. Hong Kong will definitely contribute to and prepare for the high internet traffic growth in Asia Pacific.

Though I am not so assertive to say there is shortage on the supply of capacity across the Pacific Ocean, the shortage is true in specific routes or markets. It is even harder when we are considering the supply of large scale of capacity and diverse routes.

PLCN is coming to fuel the market

Now, PLCN is coming to fuel internet and cloud infrastructure connecting Hong Kong and across the Pacific Ocean . The launch of PLCN this year will make capacity planners more relaxed.

PLCN, the first submarine cable directly connecting Hong Kong to US, will provide a high-speed, low latency and high availability alternative to the markets. PLCN is able to supply large scale capacity up to 144Tbps across the Pacific. It can be forecasted that PLDC as the major investor, builder, owner and operator of the PLCN cable system will be one of the few providers capable of offering large scale capacity above 1Tbps connecting Hong Kong and the US within the next two to three years. With PLCN's open cable feature, PLDC can offer not only large scale capacity, but also a quick provision to meet customer’s needs.

PLCN will enrich the diversity for internet and cloud infrastructure across the Pacific. PLCN features the shortest route between Hong Kong and the US. Furthermore, PLDC will support the innovation in submarine cable industry and internet innovation in Hong Kong. Taking advantages of the open cable structure and the first application of C+L bands technology in PLCN, PLDC will cooperate with multiple manufacturers to demonstrate the open cable design, the innovation on L band, and the scalability from 100Gbps DWDM to 200G and even 400G over 13000km of ultra-long subsea environment. PLDC will facilitate innovative institutes in Hong Kong with sufficient trans-pacific bandwidth.

PLDC has forecasted the surge of bandwidth requirement in Hong Kong several years ago and has created the PLCN project to connect Hong Kong and the US with huge capacity and low latency. Fortunately, PLCN is coming online soon. We are even happier to see that there are new projects following the initiatives of PLCN. With PLCN and other following projects, we are making Hong Kong a better international commercial hub and internet hub.