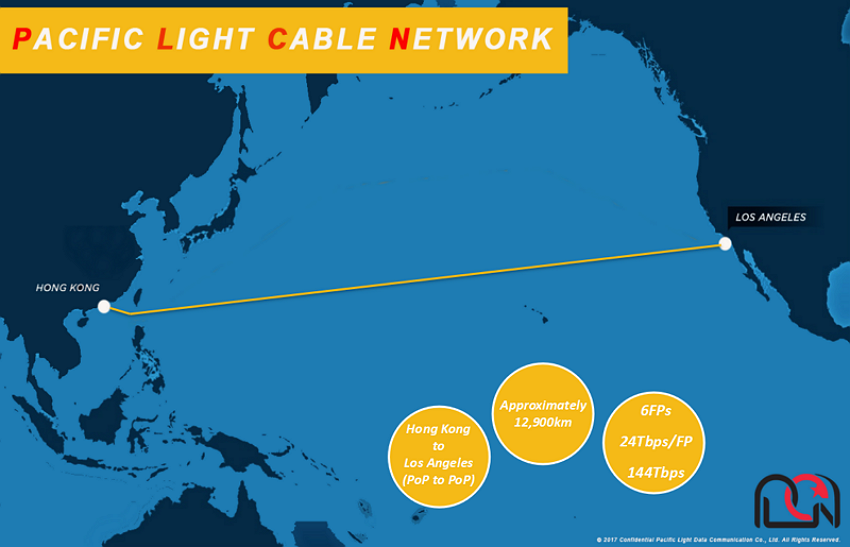 PLCN is the first subsea cable with straight connection between Hong Kong and the US, non-stop running over 13000km. It comprises of 6 fiber pairs, offering huge capacity up to 144 Tbps across the Pacific, with 24 Tbps per fiber pair.

There are now 11 in-service subsea cables in Hong Kong. Only one offers trans-pacific connectivity, i.e. Asia America Gateway (AAG), with less than 10Tbps total capacity. There are stops in the Philippines, Guam and Hawaii on AAG cable system. Trans-pacific capacity on AAG cable system has almost been fully used. It is hard to get additional capacity on AAG to meet the requirement of cloud platforms which may request multiple channels of 100Gbps in the same cable route .

Hong Kong is one of telecom hubs in Asia, huge traffic from Mainland China and South East Asia is transited in Hong Kong and onward to the US. But most of such traffic has to be routed to other intra-asia cables and stopped at cable landing stations or PoPs in Japan and then connected to trans-pacific cables. Running over Hong Kong - Japan - US routes, it not only increases latency, but also makes more possible faults.

When PLCN is ready for service in 2019, such situation will be tremendously changed. PLCN will provide huge trans-pacific capacity up to 144 Tbps and the shortest round trip delay (RTD) of 130 ms between Hong Kong and Los Angeles, more than 10ms faster than any other existing cable routes.

PLCN will significantly promote the competence of Hong Kong as a telecom hub in Asia-Pacific, offering sufficient capacity and faster route for internet and cloud services.

From technically point of view, PLCN takes the first adventure to apply C+L bands technology in a commercial subsea cable system, boosting technology innovation. Traditionally, most of subsea cable systems operate at the optical spectrum which is known as Conventional-band (C-band), i.e., 1530 - 1565nm. As shown in the following figure, C-band occupies about half of the 1550nm spectrum window, while the optical spectrum to the right of the C-band was not commonly used. This part of spectrum is the Long -band (band),  from 1565nm to 1625nm.

Taking advantage of C+L bands, it doubles available spectrum and hence double total capacity per fiber pair in a subsea cable system. In PLCN, it can support 240 channels of 100Gbps with C+L bands technology. Consequently, it lowers cost per unit bandwidth. But C+L transmission experiments over ultra-long cable distance have not been demonstrated until 2016. PLCN ventured to use C+L bands technology in late 2015, accelerating C+L bands technology from experiments into commercial service.

With successful commercialization of C+L bands technology, PLCN wins unique competitiveness with lower cost on unit bandwidth. This advantage will last for quite a long period in the market.

In PLCN system, it is equipped with an unique equipment called as Spectrum Manager or Spectrum Gateway, which can split the whole spectrum of C+L bands into various smaller portions. Each portion of the spectrum can be transmitted in a virtual fiber pair and connected to a unique SLTE. PLDC develops this technical feature into a product called Spectrum.

With Spectrum service, a customer of PLDC can enjoy the flexibility to procure, deploy, manage and upgrade its own SLTE. The customer can minimize the initial investment for its trans-pacific capacity requirement, while keeping flexibility and controllability.

Spectrum service in PLCN is quite flexible as well. The Minimum Spectrum Unit (MSU) is designed as 5% of the whole spectrum of C+L bands, or equivalently 12 channels, or 1.2Tbps of capacity based on 100Gbps DWDM technology. A customer can deploy one or multiple MSUs in one SLTE.

The above mentioned products, Spectrum, Quarter Fiber Pair and Half Fiber Pair, are specially designed to meet the huge capacity requirement for internet and could connectivity. In PLCN, there are also offerings of traditional Ethernet and OTN connectivity from 10Gbps - 100Gbps.

On March 23rd, 2018, PLCN landed at Deep Water Bay in Hong Kong. The whole system is on track to be ready for service in the second quarter, 2019. PLCN is changing internet and cloud connectivity in Hong Kong.