This article is part of a series of interviews with leading cable project owners around the world  for Submarine Networks Projects 2017.  In this article, Winston Qiu, Senior Vice President at Pacific Light Data Communications shares his vision for the new Pacific Light Cable Network (PLCN).

Despite the many subsea cables connecting Asia with the US, there are none which connect Hong Kong directly with the US. That is until now. Pacific Light Data Communications (PLDC) are currently in the process of laying the first direct cable – the Pacific Light Cable Network (PLCN) – between these two terminals to offer latency which is up to 20 milliseconds shorter than existing cable projects.

Due for completion in Q4 of 2018, this 12,800km cable is designed with open cable structure and C+L bands technology, which consists of 6 fiber pairs (240x100Gbps wavelength per fiber pair) for a total system capacity of 144 Tbps.

The cable will extend from Telecom House (TMH) in Hong Kong to the Equinix LA4 carrier neutral data center in El Segundo, California, where there exists connectivity solutions to reach other data centers as well as direct connections to Amazon Web Services, the Google Cloud Platform and other cloud service providers. 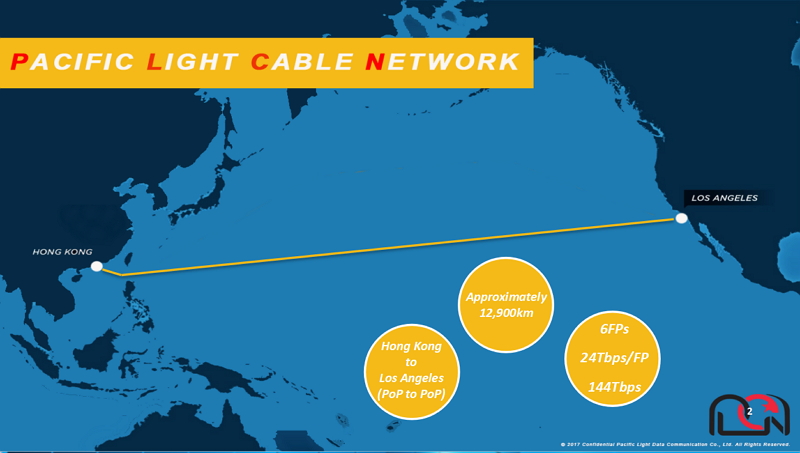 The cable has been designed to meet the demands of various customers, with full, 1/2 and 1/4 fiber pair products for strategic carriers and OTT customers; 100G wavelength and FLEX Ethernet products for carriers, cloud providers and IDC operators, and SDN-enabled on-demand and smart connectivity for enterprise customers.

Regarding upgrades, Winston shared that the system can be upgraded to 200Gbps, 400Gbps or even 1Tbps per wavelength in future. As the system is an open cable system, each co-builder can upgrade its own fiber pair at its sole discretion. So the upgrade can be done smoothly according to the demands. The PLCN cable system is designed with state-of-the-art subsea cable technology, for example it is the first subsea cable system in the Asia Pacific region to adopt an open cable structure, enabling each co-builder to choose their own terminal equipment and providers.

It is also one of the first systems to incorporate C+L optical spectrum bands. Regarding extension, options are open to develop new branches to the Philippines, Taiwan, South Korea, Japan, or Australia, subject to the requirements of the customers and partners in the future.

When asked what protective measures were being taken, Winston informed us that Deep Water Bay was chosen as a landing point instead of the more congested Chung Kom Kok or TKO landing areas in Hong Kong to mitigate potential damage. In the bay, the cable has also been buried to a depth of between 3-5 metres.

Incorporating as it does all the latest technology, and with a sound risk-mitigation strategy, PLCN is set to make a deep and lasting impact on data transmission between Asia and the US over the next 25 years or more.