According to PLDT, PLDT is investing nearly P7 billion (US$136.7 million) in the JUPITER cable system which will further increase PLDT’s international cablingcapacity and reinforce the resiliency of its undersea fiber links to the US and Japan. This investment includes purchases by PLDT of complementary terminal equipment and other related facilities in the Philippines, Japan and the US.

The JUPITER Consortium which includes Amazon, Facebook, SoftBank, PCCW Global, NTT Communications, and PLDT has signed commercial agreements to build and operate JUPITER which will directly connect Maruyama and Shima in Japan and Los Angeles in the US to Daet, PLDT’s cable landing station in Camarines Norte in the Philippines to meet the rising data traffic and complement cable systems through increased capacity and diversity in these areas of the Pacific Rim.

JUPITER is a fiber optic submarine cable system with a total length of approximately 14,000 kilometers that will employ wavelength selectable switch technology and which is being built based on the “open cable” model. It can deliver a capacity of more than 60Tbps from the Philippines to Japan and the US directly. It will be ready for service in early-2020. 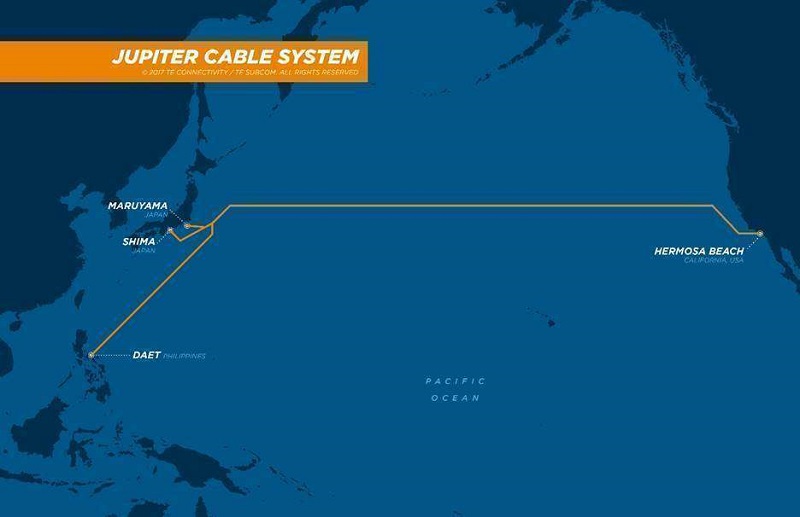 “We are investing in this new cable system in anticipation of the continued explosion of data traffic over the next few years, as households and businesses in the Philippines adopt more and more digital services,” said PLDT Chairman President and CEO Manuel V Pangilinan.

“Along with our other technology initiatives, this new project will enable PLDT to gear up for the emerging ‘Gigabit Society’ where ultra-high-speed connectivity will support a wide range of bandwidth-heavy, low-latency digital applications and internet-of-things (IOT) services,” he added.

“JUPITER will boost the PLDT Group’s capability to offer its customers bandwidth-heavy broadband applications that require international access like IP-based data, high-definition video content, and other multimedia and digital services,” said PLDT FVP and Head of International and Carrier Business and President and CEO of PLDT Global Corp. Kat Luna-Abelarde.

“The JUPITER undersea cable project is specifically designed to give data service providers like PLDT the ability to quickly ramp up capacity when needed,” Abelarde pointed out.

According to PLDT and Smart SVP and Head of Network Planning and Engineering Mario Tamayo, consortium participants in the JUPITER cable system are acquiring the fiber pairs themselves – not a share of the system’s fiber capacity. “As a result, PLDT can upgrade the capacity of its own fibers by simply investing in the terminal technologies that boost data throughput, rather than wait for the upgrade cycle of the consortium. This will enable PLDT to increase capacity much more quickly and adjust to changing market needs in a significantly more agile manner.”

Moreover, the new cable system will directly link the Philippines to Japan and the West Coast of the US, without any hops or stop overs.  As a result, latency of the data connectivity will be significantly lower.

“As PLDT rolls out more fiber-to-the-home (FTTH) facilities and Smart deploys more LTE and LTE-Advanced base stations in Smart’s mobile network, data traffic is surely going to rise steeply.  It is thus vital that we undertake this project now so we can stay ahead of the curve,” Tamayo said.

PLDT VP and Head of International Network Gene Sanchez said that strengthening undersea cable links to the US and Japan is a priority because the bulk of internet content and services being accessed by Filipinos are from servers in the US and a material portion of demand for content is served via Japan. He also noted that the country has extensive economic ties with both the US and Japan which are among the world’s largest economies.

PLDT has been consistently investing heavily in international submarine cables to meet the growing connectivity needs of the country, including the requirements of the country’s business process outsourcing (BPO) industry.

The year before, the Company together with its partners completed the construction of the Asia Submarine-Cable Express (ASE), the largest-capacity international submarine cable system in the Philippines with a landing station located in Daet, Camarines Norte.

PLDT has also landed other international cable systems in the Philippines, such as the Asia Pacific Cable Network 2 (APCN2) and the Southeast Asia-Middle East-West Europe 3 (SEA-ME-WE3), which both land in Nasugbu, Batangas, and the Asia-America Gateway (AAG), in Bauang, La Union.