JUPITER cable system will have a total length of 14,557 kilometers and consist of three main segments:

The Main Trunk connects Maruyama and Shima, Japan, with Hermosa Beach, California. The Main Trunk consists of five fiber pairs. Facebook owns 2 fiber pairs, PLDT owns one fiber pair,  Amazon, NTT, PCCW Global and Softbank each owns a half fiber pair.  Each fiber pair has a total design capacity of 12 Tbps per fiber pair (for a total of 60 Tbps for the JUPITER cable system as a whole) using current technology.

The Oregon Branch connects Pacific City CLS in Oregon, with a branching unit on the Main Trunk. It consist of two fiber pairs, with a total length of 740 km. The Oregon Branch is soly invested and owned by Facebook.

The Jupiter cable has dual lands in Japan, at the Maruyama CLS owned by Softbank and the Shima CLS, owned by NTT.

The Jupiter cable has dual lands in the US, at the Hermosa Beach CLS owned by RTI and the Pacific City CLS owned by Microsoft.

For JUPITER’s Hermosa Beach landing, NTT America seeks to enter into an agreement with RTI Infrastructure, Inc. (RTI-I) granting NTT America an IRU for RTI-I’s beach manhole and one of its bore pipes at Hermosa Beach and for a conduit connecting the beach manhole with RTI-I’s existing, highly-secure, and purpose-built cable landing station. Under the contemplated agreement, RTI-I grants to NTT America a long-term lease for collocation space for power feed equipment in RTI-I’s cable landing station space. NTT America seeks to ensure that both the IRU and lease agreements will have initial 15-year terms, with the option of two five-year extensions that may be exercised at NTT America’s sole discretion, for a maximum of 25 years each. NTT America has exclusive control over the power feed equipment that they locate in RTI-I’s cable landing station. NTT America retains operational authority over the JUPITER landing facilities at Hermosa Beach and provides direction to RTI-I in all matters relating to JUPITER.  The terminal equipment for all of JUPITER’s fiber pairs is installed at CoreSite LA2 data center in Los Angeles.

For JUPITER’s Oregon landing, Edge USA contracts with Microsoft Infrastructure Group,LLC (MIGL) which provides certain limited services that would not provide it with any ability to affect significantly JUPITER’soperation. Edge USA constructs beach manhole and bore pipes from the landing point to the Pacific City CLS. Under the contemplated agreement, Edge secures long-term rights from MIGL for collocation space for power feed equipment in MIGL’s Pacific City CLS —space over which Edge USA has exclusive control. Edge USA ensures that the contemplated agreement has an initial 15-year term, with the option of two five-year extensions that may be exercised at Edge USA’s sole discretion, for a maximum term of 25 years. Edge USA has exclusive control over the power feed equipment locating in MIGL’s Pacific City CLS. Edge USA retains operational authority over the JUPITER landing facilities at the Pacific City CLS and provide direction to MIGL in all matters relating to JUPITER. The terminal equipment for all of JUPITER’s fiber pairs in the state of Oregon is installed at Flexential Brookwood Data Center.

NTT's Reorganization and Ownership in Jupiter

In a series of actions consummated as of July 1, 2019, Nippon Telegraph and Telephone Corporation (NTT) and its subsidiaries and affiliates (collectively, the NTT Group) undertook to reorganize the businesses of NTT Com through a de-merger that separates NTT Com's global telecommunications business from its domestic business in Japan (the De-Merger). Pursuant to the De-Merger, NTT Com assigned its interests in the JUPITER system to another wholly owned subsidiary of NTT, NTT WT, which will replace NTT Com as a joint applicant for the JUPITER cable landing license. NTT WT, NTT Com, and NTT are Japanese entities. The De-Merger consisted of four distinct steps.

Second, the NTT Group established NTT WT as a new wholly owned, direct subsidiary of NTT Com and contributed to it the assets and liabilities of NTT Com's global telecommunications business (including NTT Com's interest in the JUPITER system).

Third, NTT Com contributed the shares of NTT WT and of each of the subsidiaries of its global telecommunications business (including NTT America) to NTT Ltd.

Finally, in consideration of the foregoing actions, NTT Ltd. issued shares of its own stock to NTT Com, and which NTT Com distributed such shares to NTT Inc. as dividend in kind. NTT Inc., a Japanese entity, is wholly owned by NTT. 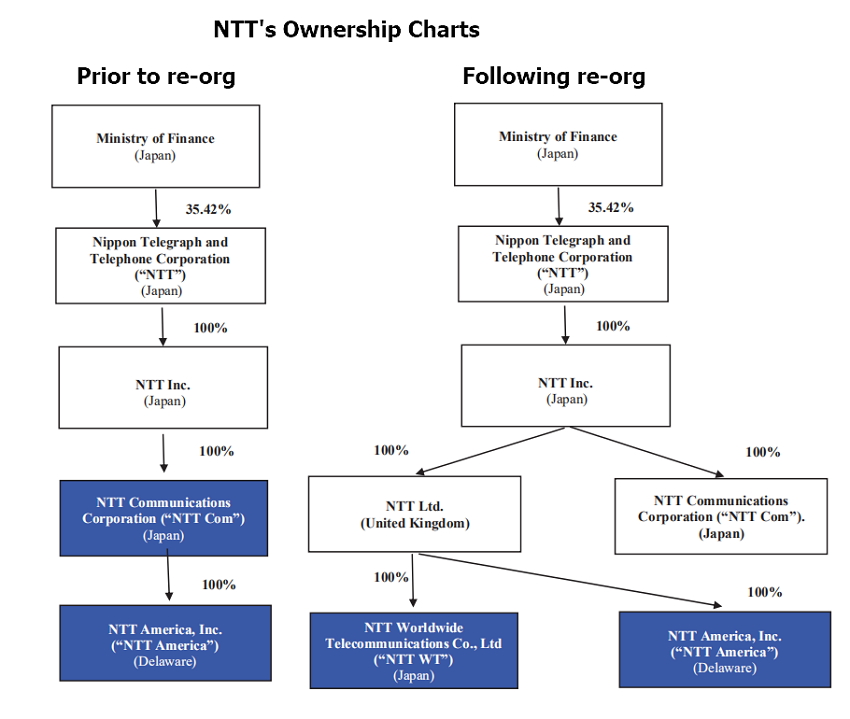