The first transatlantic cable built in over 12 years, the Hibernia Express launch marks a milestone for global communications, addressing the strong demand for fast, high-performing global network services. According to TeleGeography, demand for bandwidth between North America and Europe is projected to increase 40% annually over the next six years driven by the surge in cloud computing, large data transfer and storage requirements.

“The Hibernia Networks team has demonstrated an unwavering commitment towards completing the first transatlantic subsea cable in over a decade and we are thrilled to announce its official launch,” states Bjarni Thorvardarson, CEO of Hibernia Networks. “We are proud to have accomplished this transformational milestone, and more importantly, we are proud to deliver the lowest latency, highest performance capacity required to facilitate real-time access to information and content by the ever growing global communications community.”

The 6-fiber-pair cable is optimized for lowest latency performance, offering an unmatched roundtrip delay of sub-60 milliseconds on the New York to London route.

According to Telegeography, Hibernia Express features with RTD between Canada and the United Kingdom of approximately 45 milliseconds, which is more than 20 percent less than the next lowest latency cable, Atlantic Crossing-1 South (see Figure: Trans-Atlantic Latency by Cable) 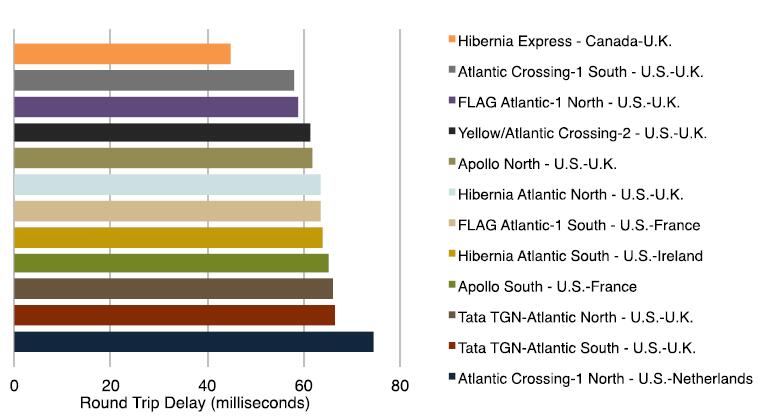 Leveraging a state-of-the-art dense wavelength division multiplexing (DWDM) platform, Hibernia Express is engineered to potentially scale up to 400Gbps per circuit and beyond, enabling customers to meet bandwidth requirements as they increase over time.

” Hibernia Express benefits numerous customer segments, including but not limited to those within the financial markets and media and broadcast industries, as well as web-centric companies and other telecommunication service providers.

In May 2015, Microsoft and Zayo Group signed on to Hibernia Express and were amongst the cable’s initial customers.