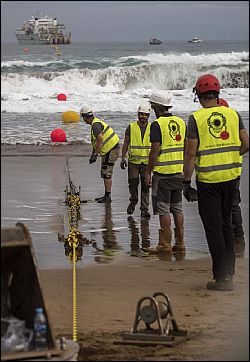 Microsoft and Facebook designed MAREA as an open cable, to be interoperable with a variety of networking equipment. This new “open” design brings significant benefits for customers: lower costs and easier equipment upgrades which leads to faster growth in bandwidth rates since the system can evolve at the pace of optical technology innovation. This is critical to ensure the Microsoft Cloud continuously improves to provide the highest availability and performance our customers need for their mission-critical workloads and data.

Microsoft and Facebook works with Telxius, building upon their longstanding experience in subsea cables on this innovative new system. Telxius will serve as the operator of the system and sell capacity as part of their wholesale infrastructure business.

MAREA will be the highest-capacity subsea cable to ever cross the Atlantic – featuring eight fiber pairs and an initial estimated design capacity of 160Tbps. According to Telxius: