Bulk Infrastructure announced recently that Amazon Web Services (AWS) has signed an agreement for the use of Bulk´s ownership in the HAVFRUE trans-Atlantic submarine cable and subsequent carrier neutral Data Center facilities. The HAVFRUE subsea cable system comprises a trunk cable connecting New Jersey, USA to the Jutland Peninsula of Denmark and branches to Ireland and Norway, with a system capacity of 108Tbps. 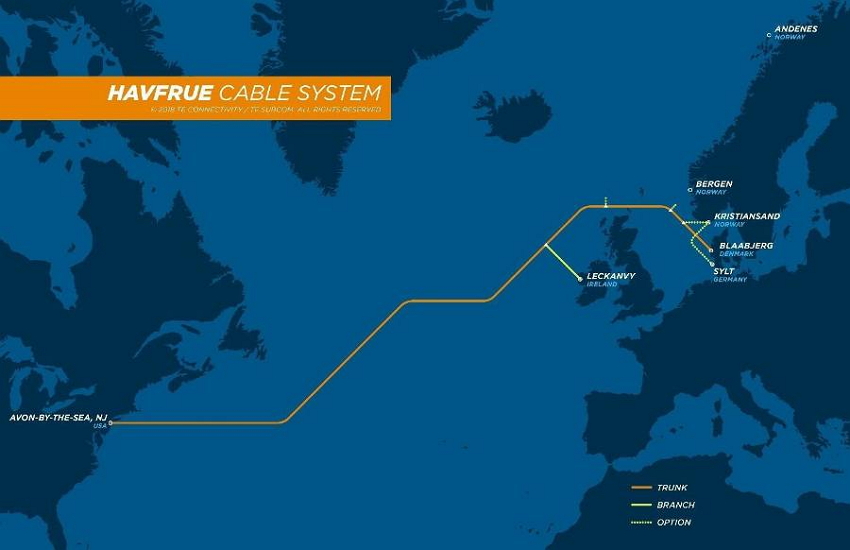 The agreement between AWS and Bulk Infrastructure covers termination points in the New Jersey Fiber Exchange (NJFX), in Wall New Jersey, USA, Dublin, Ireland, and Bulk´s facilities at both the N01 Campus in Southern Norway and their facility in Western Denmark.

Bulk´s exclusive branch in the HAVFRUE subsea cable to Kristiansand, Norway opens up possibilities for utilizing Norway´s vast surplus of cost-efficient and stable baseload renewable energy in addition to creating diverse routes to Nordic and European markets. The new HAVFRUE subsea cable will be ready for service in the fourth quarter of 2019.

As the market pioneer and leader in cloud computing, AWS has actively invested in the subsea cable market. AWS acquired one fiber pair IRU on Marea cable system in Jan, 2019. AWS had its first investment in subsea cable market to purchase IRU capacity Hawaiki Cable System in late 2016, invested in JUPITER Cable connecting Japan and the US in early 2017, and announced to invest and be a consortium member of BtoB Cable linking Hong Kong and the US in mid 2018.