This weekend Orange landed the “AMITIE” submarine telecommunications cable on a beach in the commune of Le Porge, near Bordeaux (Gironde). After two initial attempts were aborted due to unfavorable weather, the better conditions today allowed us to land the cable using an innovative technical process that protects the environment (horizontal directional drilling), a huge technological challenge that was successfully pulled off by the deployment teams. Orange is a partner in this 6,800 km state-of-the-art cable project, which will connect the state of Massachusetts (USA), Le Porge (France) and Bude (UK). Commissioning is scheduled for early 2022.

“With this new agreement, we are yet again demonstrating our skills and expertise in transatlantic submarine cables. Against the backdrop of a boom in international traffic, the arrival of these increasingly efficient cutting-edge submarine cables, and in view of the strategic and national sovereignty issues linked to submarine cables, Orange must continue to play a leading role in the global market and develop infrastructure to connect France to other continents,” explains Jean-Luc Vuillemin, head of International Networks and Services at Orange. 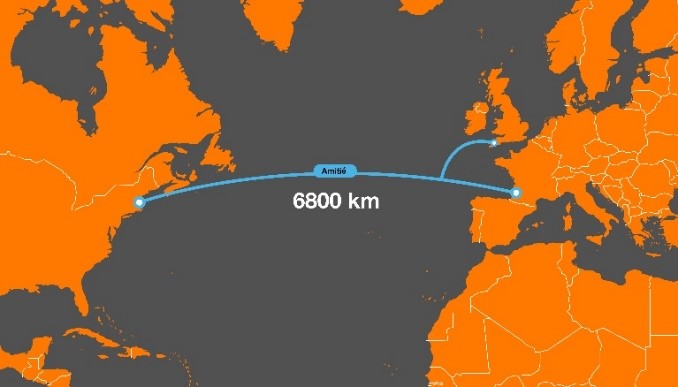 Orange will benefit from two pairs of fiber optic cables as part of this new system, offering capacity up to 23 Tbp/s each.
As the player responsible for the French part of the cable, the ‘landing provider,’ Orange is in charge of operating and maintaining the system’s landing station. The French operator will supply the system’s links on land, starting from this station towards Bordeaux, then Paris and Lyon, and it will link up to the rest of Europe thanks to a terrestrial network employing cutting-edge optical technology.

An opportunity for regional development

The arrival of this new mega cable near Bordeaux represents an excellent opportunity for the region, which will become an international digital hub, allowing new data centers to be created to support the growth of the local digital ecosystem.

Thanks to the support of local partners, local authorities and State services, Orange was able to launch this project, by combining agility and efficiency, and by reusing part of the existing infrastructure to minimize the work and limit the impact on local residents and the environment.

"For the AMITIE project led by Orange, decentralized State services (sub-prefecture, DDTM, SGAR and ABF) joined forces in Gironde to coordinate public partners (departmental council via Gironde Numérique and the departmental traffic command center, the mayor of Le Porge, the Nouvelle Aquitaine regional council, the maritime prefecture, the Ministry of Culture including DRASSM and INRAP) as well as private partners (operator and works engineering). This coordination took the form of steering committees overseen by a lead sub-prefect, which were held every two months at the prefecture and then remotely. This is a great example of public-private cooperation to create value and technological innovation that demonstrates our nation's industrial capabilities. This project is part of a national policy to enhance the appeal of electronic communications cables. Despite the pandemic, the project was completed on time and it paves the way for further cables along our coast," Fabienne Buccio, prefect of the Nouvelle-Aquitaine region and prefect of Gironde.

This essential project for Orange was implemented with a focus on the environment. The project’s design carefully considered the fragile nature of the sites involved (beaches, dunes, forests), and used the latest technologies to avoid impacting the ecosystem and local flora and fauna. Horizontal directional drilling was conducted at 20 meters under the beach and dunes. The route to the landing station was optimized to avoid impacting the forest (use of existing paths and the edges of local roads). The new terrestrial infrastructure was studied by considering the department’s fiber optic deployment projects.

Orange offers a long-term, secure solution for all its customers

Thanks to the AMITIE cable, Orange can play a leading role in the transatlantic market, offering a totally secure end-to-end connection solution between Europe and the United States. The fiber optic technology is provided by two high-speed cables: AMITIE, plus the DUNANT system, which was recently commissioned in Vendée. As a result, Orange will be able to offer a connection solution between France & the USA to all its private customers, professionals, businesses and operators which is unique in terms of performance and reliability.

The Atlantic Ocean is one of the busiest submarine routes in terms of connectivity. On average, the traffic between Europe and North America doubles every two years, and it has experienced an unprecedented increase in traffic during the COVID-19 lockdowns. The AMITIE cable will be crucial to accommodate this future increase in traffic on different networks.
Guaranteeing continued and reliable traffic is also crucial. The arrival of this state-of-the-art cable will offer full redundancy in this zone.
This cable is also designed to evolve at the same pace as future generations of optical transmission technologies. It will be able to maintain a high level of performance for at least the next 20 years.

Orange, a major player in the submarine cable market

Orange continues to invest heavily in submarine cable projects to guarantee and continually improve the quality of service of its global network, comprising over 40 submarine cables. After recent projects on the Atlantic and Mediterranean coasts, this new cable places France at the heart of the European platform used by various international networks to link to America, but also Africa and Asia.