HKT announced in November 2016 its plan to construct the Ultra Express Link (UEL), a super high capacity, low latency submarine cable connecting the Tseung Kwan O Industrial Estate (TKOIE) and Chai Wan. Targeted to launch in the second half of 2017, the UEL is a 3 km submarine cable system that will be laid 30-40 meters undersea, connecting TKOIE and Chai Wan (with a landing station in Siu Sai Wan) -- two sites with high density of data centers. 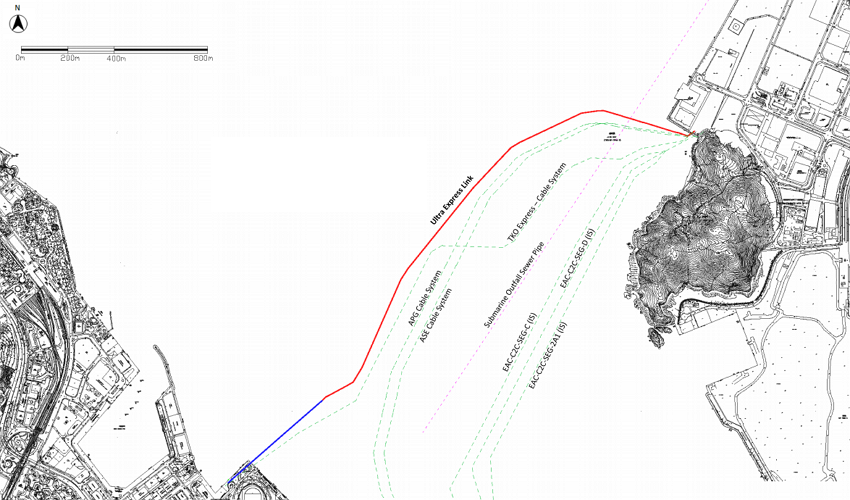 The majority of the data centers at TKOIE is currently connected by two rings of fiber network systems to build redundancy, and are linked to five exchanges in Kowloon with three fiber routes.

Upon completion, the UEL will become HKT's second submarine cable, after the first one that was built in 1993 to connect Kennedy Town with four outlying islands (Peng Chau, Hei Ling Chau, Cheung Chau and Mui Wo).

In the future, customers can also leverage two more diversity paths: 1) the newly announced TKOIE UEL; and 2) a fiber cable connecting Cross Bay Link and Lam Tin of Kowloon, with an expected launch date in 2020.

Customers will also benefit from a super low latency network path between TKOIE and Chai Wan area, which the new UEL route supports latency as low as a few 10th of micro seconds. "This means it would take just a few seconds to download a full-featured blu-ray movie," Lam suggested.

At present, HKT is working on the initial ground work for the UEL project, including design, the seeking of government approval, underwater exploration, conducting of an environmental impact study. As regards costs, Lam merely said that the construction cost of the UEL will be more expensive than the existing three cross-harbor tunnel routes combined.

In addition, Lam said HKT has just renewed a 10-year exclusive agreement with the MTRC for the exclusive provision of Wi-Fi service to all MTRC stations. In particular, HKT will extend the Wi-Fi coverage from the MTR station concourse area to all MTR train compartments.