The TGN-Intra Asia Cable Network (TGN-IA) is a private Intra-Asia submarine cable system constructed, owned and operated by Tata Communications. The TGN-IA cable route runs deliberately to avoid areas prone to earthquakes and other hazardous areas and significantly improves the robustness of the submarine networks. 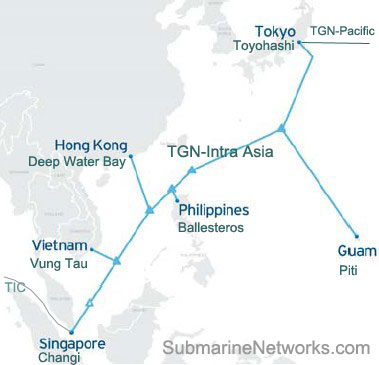 Geographically, taking consideration of the experience from the Taiwan Earthquake in Dec 2006 which caused multiple submarine cable cuts, the TGN-Intra Asia cable route was deliberately designed to avoid areas prone to earthquakes and other hazardous areas. The TGN-IA cable route goes much more southward and eastward of the Taiwan Island. 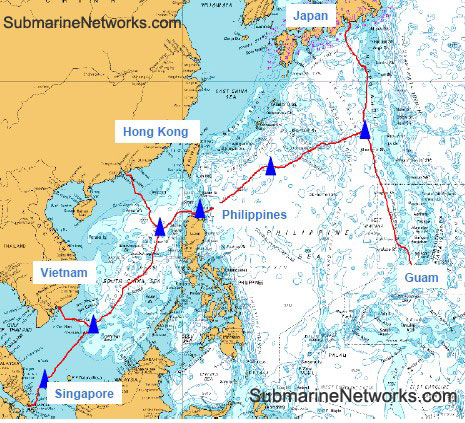 The TGN-IA cable network consists of one express fiber pair directly connecting Singapore and Tokyo, to offer excellent low latency of 63ms between Singapore and Tokyo. And there are also direct connections between the Philippines and Hong Kong as well as the Philippines and Japan, to provide alternative and sufficient capacity for the business process outsourcing (BPO) industry in the Philippines, where Globe Telecom is an exclusive landing party of the TGN-IA cable network. 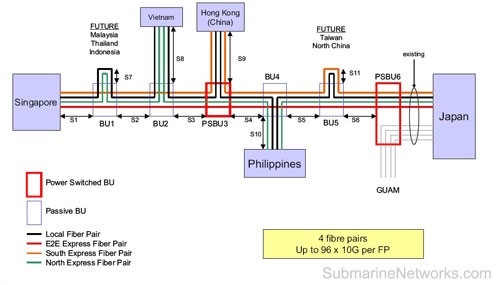 Running over the TIC, TGN-IA and TGN-Pacific route, the latency (round trip delay, RTD) can be achieved approximately:

While offering capacity of Tbps, the TGN-IA cable network improve the allover robustness and reliability of the submarine networks, especially in intra-Asia regions. The TGN-IA cable network survived well after the shocks of the Typhoon Morakot and earthquake in southeast of Taiwan in August 2009 and the Magnitude-9.0 Japan earthquake in March 2011, both of which caused multiple submarine cable cuts.