Matrix Networks announced on January 12, 2010 that it was working with Nextgen Networks Pty Ltd and PT NAP Info Lintas Nusa to explore a proposal to build a new international cable system linking Singapore to Sydney, Australia via Perth.

A possible solution for the proposed new Singapore to Australia undersea cable is to extend the Matrix Cable System (MCS) to Perth, Australia.

Matrix and NAP Info are the joint owners of the Matrix Cable System that joins Singapore and Jakarta, Indonesia, and each owns fiber connectivity respectively in Singapore and Indonesia. Nextgen owns and operates a terrestrial cable system around Australia between Perth on the west coast (the Australian landing point for the new cable) and Brisbane, passing through Adelaide, Melbourne Canberra and Sydney on the way.

This collaborative effort by Nextgen, Matrix and NAP Info would bring out a synergy among these three parties' existing network assets for a cost effective and reliable network covering Australia, Indonesia and Singapore, with connectivity to the global submarine networks as well.

The proposed network, with an initial design capacity of 2.56Tbps and a service offering from carrier neutral POPs in Singapore, Jakarta and Sydney.

The Matrix Cable System has been running since August 2008, with a reserved branch for Australia Extension. 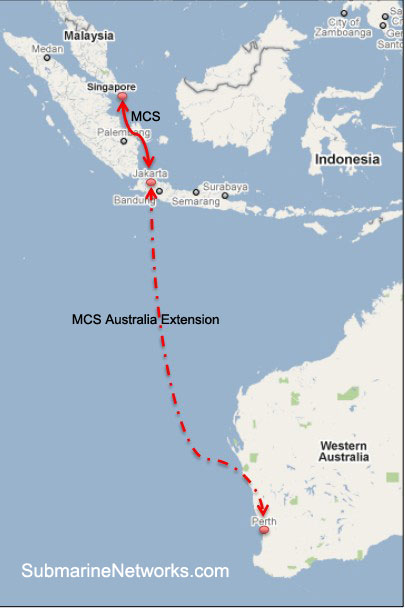