The ASE is being constructed by NTT Com, Malaysia-based Telekom Malaysia, Philippines-based PLDT and Singapore-based StarHub. Total cost of construction is estimated at approximately 430 million USD (about 36 billion yen).

When it initially starts operating, the ASE will serve Japan, Malaysia, Singapore and the Philippines. A separate route to Hong Kong will be added in December 2012. Connections to Mainland China and additional Southeast Asian countries are expected to be launched in collaboration with major carriers in these markets. 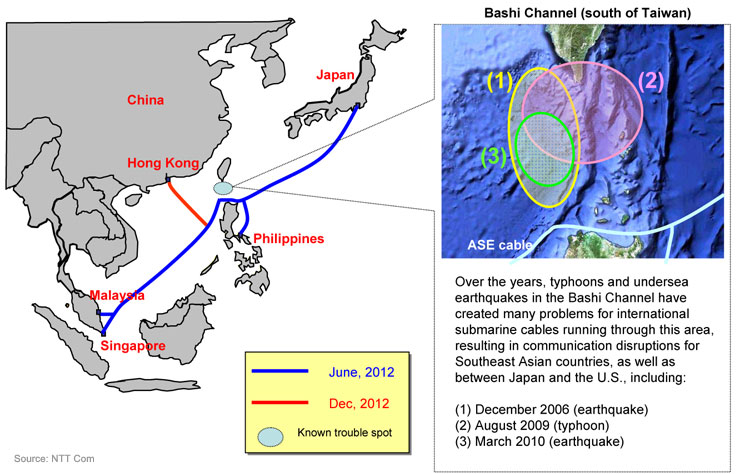 Incorporating the latest 40 Gbps optical technology, the ASE will boost the capacity and strengthen the redundancy of NTT Com’s Asian cable networks, paving the way for enhanced global network services that will meet the region’s increasing needs for global traffic, low network latency and reliability. The ASE also has a capability to incorporate 100 Gbps optical technology in the future.

The ASE will be specially designed to withstand earthquakes and typhoons, particularly in areas such as the Bashi Channel south of Taiwan, where undersea earthquakes have disrupted international communications in the past few years. Routes between Japan, Hong Kong and Singapore will cover the shortest possible distances to maximize reliability and minimize latency.

"The ASE’s planned launch is further testament to NTT Com’s growing presence in the markets of Asia," said Akira Arima, President and CEO of NTT Com. "We are excited about the business opportunities we expect to realize by bridging Tokyo and other Asian economic hubs with our high-speed, high-capacity ASE cable network."