It was reported, the APG cable consortium tentatively signed an agreement for the construction and maintenance of the Asia-Pacific Gateway (APG) cable system in Beijing on December 20, 2011. KT, NTT Com and Chunghwa Telecom all anounced the conclusion of APG C&MA. And NEC announced the award of APG cable supply agreement on the same day.  While most of other APG consortium members, including the Chair member, kept silience on the signing of APG C&MA. It was said, the APG cable project was then pending for approval from several governmental authorities, including China Authority.

As reported, the APG cable will land at Nanhui and Chongming cable landing stations owned by China Unicom and China Telecom respectively. And another leading Chinese operator, China Mobile, participates in the APG cable project as well and is said to contribute for its Hong Kong landing.

As a project with investment of dozens of million dollars, the APG cable landing in China is subject to the approval by the National Development and Reform Commission (NDRC). It is believed it takes the NDRC several months to review and approve the APG cable project in which all the three leading Chinese operators invests. No matter how difficult it may be, and how sensitive issues it may invlove, China Authority has finally approved Chinese operators to participate and invest in the APG cable project. China Unicom may lead the project ahead smoothly in the future.

The APG cable spans over 10,000 km, linking nine countries and regions including Mainland China, Taiwan, Hong Kong, Korea , Japan, Vietnam, Malaysia, Singapore, and Thailand in the Asia-Pacific region. The APG cable system is designed with the state-of-the-air 40G DWDM technology, and is upgradable to 100G DWDM technology, with a total system capacity of more than 55 Tbps and an investment of US$500 million. The APG cable is expected to be ready for service in the third quarter of 2014. 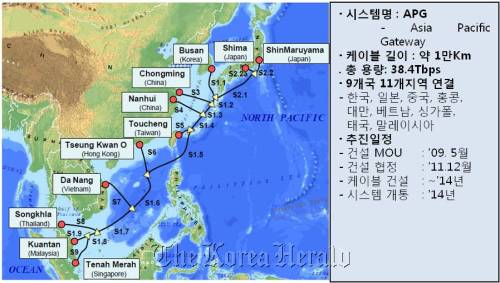 Compared with the ASE cable and the SJC cable with similar coverage in the Asia-Pacific region, the APG cable has been delayed for quite a long time though it was initiated the earliest. With this approval from China Authority, the APG cable project may lead to a fast and smooth running.