Just two weeks after the first regular flight to the St Helena’s brand new airport has set an end to islanders’ physical isolation the end of St Helena’s digital isolation is in sight as well.

Almost six years after the initiative to connect St Helena was launched with the aim to foster the island’s socio-economic development, the island government has now signed a Memorandum of Understanding with SAEx International Ltd, the company behind the South Atlantic Express cable (SAEx) which will connect South Africa to the US East Coast and Brazil. 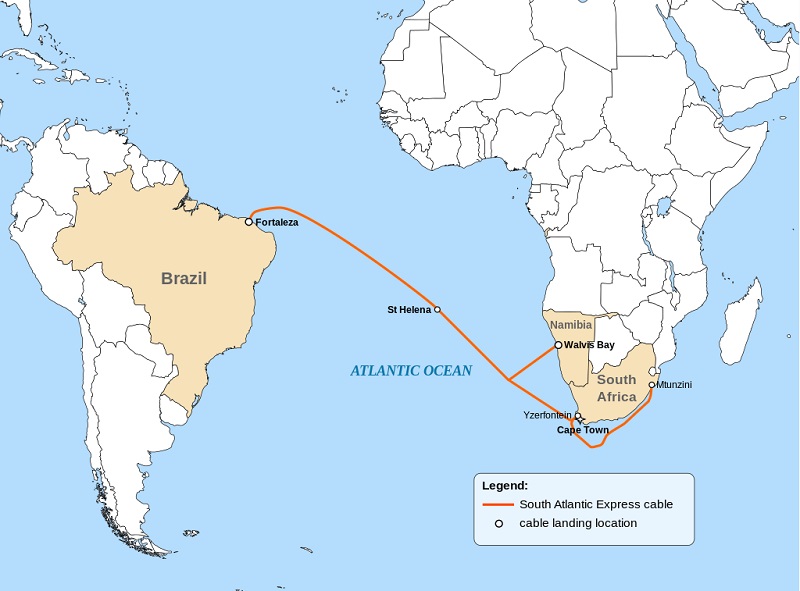 The route of the submarine fibre optic cable, which will span the South Atlantic Ocean over a distance of more than 13,000km, passes close to St Helena, allowing a subsea branching unit to be deployed to link the cable to the island. With an initial capacity of 200 Gbps islanders will finally receive real broadband connectivity and be able to join the global Information Society. Today the entire island population of 4,500 shares a slow satellite link of 20 Mbps which is slightly more than the average broadband speed in the UK, which currently sits at 16.5 Mbps per household.

Paul McGinnety Assistant Chief Secretary of St Helena Government commented: “This is a significant milestone for St Helena and we are indebted to a number of key supporters who have championed the need for St Helena to access a submarine cable”

The South Atlantic Express cable (SAEx) will deliver an initial bandwidth of at least 200Gbps (200,000 Mbps) to St Helena with the option to upgrade to a multiple thereof in the future.

“A key focus at present is concluding important partnerships critical for the success of the cable.” explains Dr. Rosalind Thomas, CEO of SAEx Ltd.

The lion’s share of funding for the St Helena branch worth a low two-digit million amount of pounds will be provided by the European Union which under the 11th European Development Fund has granted an indicative amount of €21.5 million for the period 2014-2020 to St Helena.

The cable connection has generated strong interest from satellite companies to operate ground stations on St Helena with its favourable geographic location. The substantial amount of backhaul capacity required by such ground stations in order to exchange data with the rapidly increasing number of satellites in low-earth orbit does substantially support the business case for the cable landing.

Christian von der Ropp, initiator of the campaign to connect St Helena explains: “Many island nations face the issue of high operational costs after development finance institutions fund the landing of a submarine cable. Luckily for St Helena we were able to attract the interest from more than a dozen satellite companies which will drive up the utilization level of the cable massively and so help making Internet access more affordable besides creating job opportunities on the island.“

Laying works for the SAEx cable are expected to be completed in early 2020 shortly after which the cable will become ready for service.