SAEx International Ltd, a Mauritian company with its principal office in Mauritius, announced recently its plans to expand its reach to the US East Coast through Sparkle’s Pan-American network, in line with SAEx business model based on cooperation with other operators. It is a good solution to use Sparkle's existing and operating fiber pairs in Seabras-1 cable system to extend SAEx1 cable to the US.

The initial phase of the SAEx project provides for crossing the Atlantic Ocean by linking the South Atlantic section of the SAEx cable from Cape Town to Brazil via the SEAx1 cable system, and then reaching the US East Coast via Seabras-1 with landing in New Jersey, USA. 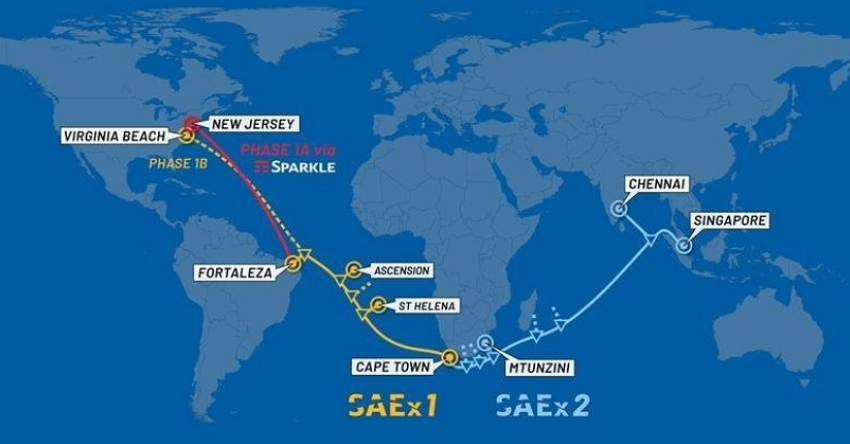 To accomplish this ambitious project, SAEx has established a strong relationship with Sparkle, the International Services arm of TIM Group and among the top ten global operators, to provide connectivity from Brazil up to USA on a fully operational fiber system. Under the terms of the agreement, Sparkle will also provide interconnection facilities in Brazil as well as technical and sales support in Brazil and North America.

This project marks a further step towards SAEx commitment to grow both west and east from South Africa into a truly global system spanning two oceans and four continents, while confirming Sparkle’s leading role in the area and its ability to provide low latency connectivity solutions and end-to-end support.

SAEx announced earlier the signing of a Memorandum of Understanding (MOU) with ACA International LLC to extend and land the SAEx cable in Virginia Beach. It seems now the landing of SAEx1 in Virginia Beach won't happen.

It is obviously a better solution to cooperate with Sparkle and use its existing and operating fiber pairs in Seabras-1 cable system to extend SAEx1 cable to the US. Under this cooperation, Seabras-1 cable will have a branch to Fortaleza, which was reserved at its original design.