The RJCN was constructed by Rostelecom and KDDI according to the Construction and Maintenance Agreement signed in December 2006, to meet the rapid growth in demand for not just Japan-Russia communication, but also Japan-Europe broadband Communication with minimal transmission delay.

Upon completion of the RJCN, it was seamlessly connected with the Transit Europe Asia (TEA) terrestrial cable, a trans-Russia DWDM network owned by Rostelecom.

With the combination of the RJCN and the Transit Europe Asia (TEA) network, KDDI and Rostelecom can offer capacity up to 10 Gbps between Japan and Russia or Europe, with the shortest latency less than 200 ms. For example, the round trip delay (RTD) over the RJCN and TEA network between Tokyo and London is 196 ms, with a significant improvement compared with the trans-pacific route via the US and the submarine cable route via the Indian Ocean. 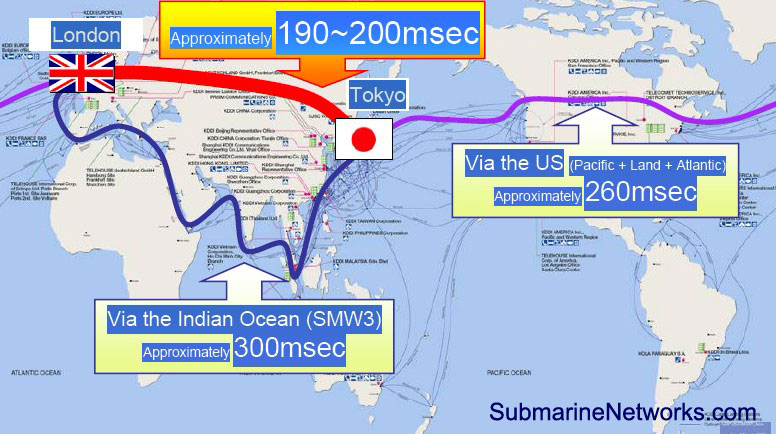 On the other hand, the RJCN and the Transit Europe Asia (TEA) network enables an alternative solution for traffic between Asia and Europe. For example, the following four solutions may be available for the traffic between Hong Kong and London:

And the RJCN and TEA network is going to offer transparent 10 Gbps wavelength in the end of 2011.