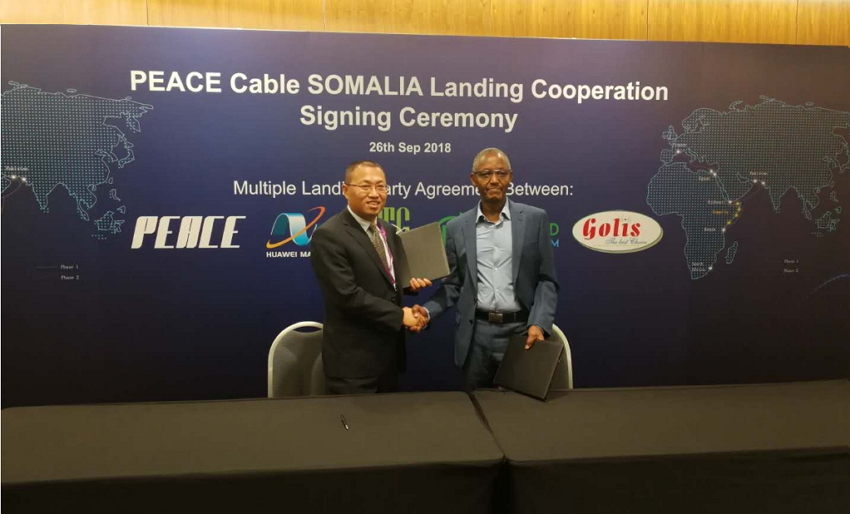 The full name of the PEACE submarine cable project is Pakistan & East Africa Connecting Europe. The first phase of the PEACE cable system, which is 8800 km long and based on 200G wave division technology, will provide a design capacity of up to 16T, mainly connecting Pakistan (the port of Gwadar and Karachi), Djibouti, Egypt and Kenya by docking with existing land cables. It will provide a new information super highway for countries in Asia, Africa and Europe, dramatically reduce the length and delay of routes between China and Africa. The project was officially launched on January 15, 2018, and is expected to be fully in commercial use in the first quarter of 2020. At present, in addition to the signing of landing cooperation agreements with Pakistan and Djibouti, the cable project will also land in Kenya and Egypt. Mr. Sun said that up to now, the survey of the sea surface on the high seas in these areas has been completed, and the main terms of cooperation between the major landing stations have reached an agreement, and the conditions for signing the landing cooperation agreement have been met. The signing of the landing site agreement is expected to be completed in October of this year. The work is proceeding as planned.

Different from other long-distance submarine cable systems using alliance mode, we invest the PEACE project by using the project company mode. Due to the flexibility brought by Open Cable design principles, this design can move the project forward quickly while reserving more space for potential customers to participate in the project. PEACE submarine cable project is mainly invested by Hengtong, also with other investment and equity participation from fund companies. PEACE cable system breaks the traditional operation mode of large project alliance, and introduces the technical elements of Open Cable. It is committed to provide neutral, flexible and zero difference services for operators and enterprises in the region.

According to Mr. Sun, at the current stage, all the cables connecting China with countries in Europe are routing via Hong Kong and Singapore in which routes are relatively simple and lack of an effective protection mechanism. In the event of geological disasters or man-made destruction, the stability of the submarine cable will be affected.

The PEACE cable system is composed of a new submarine cable routing system, which complements the existing submarine cable system, greatly improves the information security level in the region and ensures the quality of information communication. At the same time, because of shorter physical routing and fewer relay nodes, the PEACE cable system can provide better service of lower delay for communications between Central Europe and Central Africa, which promotes users’ experience and further reduces the operator's operating costs.

Sun stressed that the PEACE submarine cable project is a win-win relationship between overseas enterprises and Hengtong. The introduction of the PEACE submarine cable system can revitalize the existing communications resources of local enterprises and realize further extension and full coverage of the landlocked regions of Asia, Africa and Europe. The total population of Asia, Africa and Europe is more than 80% of the world's total population, and the total population of Asia and Africa by direct and indirect landings of the PEACE cable is more than 2 billion. With the popularization of 4G network and the rise of 5G network, the construction of PEACE submarine cable will bring more developing countries the convenience of communication, and will help increase the communication level and accelerate the development in economic fields of the countries along the way.

As a major investor in the project, Hengtong Marine Cable System Co., Ltd., a wholly-owned subsidiary of Hengtong Group, specializes in research, design, manufacturing, integration and engineering services for submarine cables. It has the largest submarine optical cable production plant in China. Its products have passed 41 full performance tests of submarine cable and gained more than 30 UJ&UQJ certificates. For now in China’s submarine cable industry, Hengtong is the only enterprise which has the most UJ/UQJ certificates combination and most authentication cable types. With completing of 5000 meters international system sea trial in May 2017, Hengtong has become the only domestic submarine cable manufacturer to pass the sea trial. Hengtong Marine is located at the mouth of the Yangtze River and has its own port, as well as a technical team and advanced technology research and development center composed of international renowned submarine cable experts. To date, Hengtong has successfully delivered more than 10, 000 km of cable worldwide, and is currently implementing the 5600 km project in Papua New Guinea after winning the 2800 km project in Chile and the 1100 km project in Bolivia.

First, the global submarine cable market is fully competitive and open, in which the quality comes first. At the very beginning, Hengtong took "China Manufacturing, Global Quality" as its vision to ensure the quality control of submarine cable. With these years’ accumulation, Hengtong has established an international first-class submarine cable testing base, and adopted international advanced testing standards and testing equipment to achieve strict control over the quality of submarine optical cable products. The successful operation of the PEACE cable project is the best interpretation of "China Manufacturing, Global Quality";

Second, the strategy and positioning of Hengtong are accurate; each strategic goal has been successfully implemented in each stage which promots Hengtong’s capacity and performance to a higher level;