The first phase of the IOX (Indian Ocean Exchange) Submarine Cable system project, which will position Mauritius as a technology hub and significantly enhance the development of the country’s broadband infrastructure to support and drive the new digital economy, was launched on April 9th afternoon at the Le Labourdonnais Hotel Caudan Waterfront, in Port Louis. 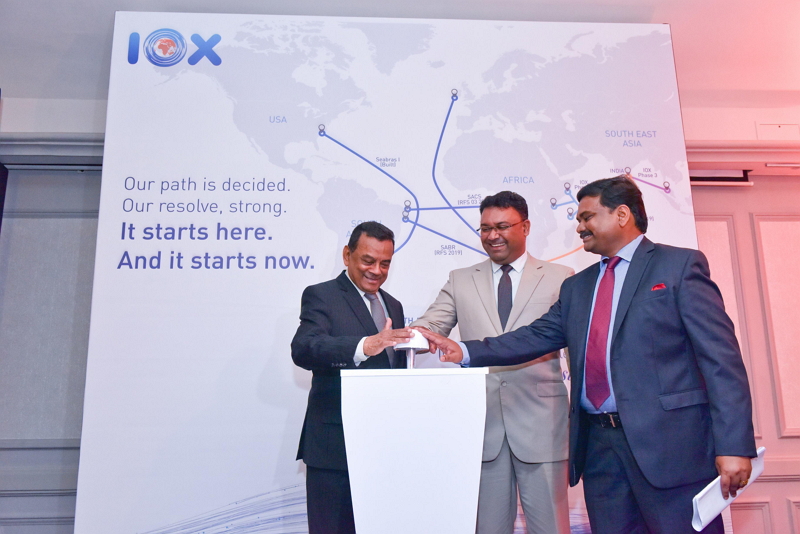 The Deputy Prime Minister, Minister of Energy and Public Utilities, Mr Ivan Leslie Collendavelloo, the Minister of Technology, Communication and Innovation, Mr Yogida Sawmynaden, and the founder and CEO of IOX Cable, Mr Arunachalam Kandasamy, proceeded with the official launch of the project.
In his address, Minister Sawmynaden remarked that the fourth industrial revolution is happening now, along with new digital economy which requires new knowledge, new skills, new economic models and new technologies.
He pointed out that the IOX Submarine Cable System, which is the third submarine cable landing in Mauritius, has been conceived as an open access cable system to offer opportunities for licensed operators to become providers of high bandwidths on cutting-edge technologies.
The Minister spoke of the vision to make Mauritius the birthplace for innovative technology-based businesses and services serving the needs of the population as well as the needs of people residing on the African continent and the global market.  In so doing, we will expand the circle of opportunities for our people, attract the best technology professionals and witness the rise of the high-income inclusive Mauritius we have all been envisioning, he added.
For his part, CEO of IOX Cable, Mr Kandasamy indicated that there were a lot of challenges that needed to be solved so as to turn IOX into reality which included having a network to meet the current needs of Mauritius but also to meet the future needs of the people of the region.
‘Our plan needed to ensure that we enable Mauritius to become a digital paradise and allow all operators to use their capacities seamlessly and also enable business building across Indian Ocean islands and make available a network that is resilient and diversified’ said Mr Kandasamy.  All of this had to be executed by global professionals and leaders in the most cost effective manner, he observed.  At IOX, no stone have been left unturned in efforts to solving problems while at the same time successfully partnering with the neighbouring islands for this ambitious project, he emphasised.
IOX
The first phase of the project begins today(April 9th) with an underwater marine survey for the IOX Cable System.  The IOX Cable System will provide customers and partners with a new open access alternative path for connecting Africa, Asia and onwards to Europe and the USA.
The arrival of the marine survey vessel in Mauritius marks a key milestone in the deployment for the new 8 890 km cable system being built by Alcatel Submarine Networks for IOX across the Indian Ocean.
This specially designed vessel is utilised in the process of assessing the seabed conditions, engineering the route, cable design, and cable installation program. The vessel will commence its survey from Mauritius, set sail towards Rodrigues Island and then survey the complete route to South Africa as a first step in completing the IOX Cable System.
Once completed, the ultra-high speed IOX Cable System will be the first open access system connecting Mauritius and Rodrigues to East London in South Africa and Pondicherry in India.  The IOX cable system will deliver an ultimate design capacity of over 54 terabits per second.  The IOX cable system is scheduled to go live in 2019.
Source: Government of Mauritius