Upon completion of the Hokkaido-Sakhalin Cable System (HSCS), it forms not only the first high capacity telecommunications infrastructure between Japan and Russia, but also an alternative route for Eurasia Information Highway with the seamless interconnection of the HSCS submarine cable and the Europe-Russia-Asia (ERA) terrestrial cable. 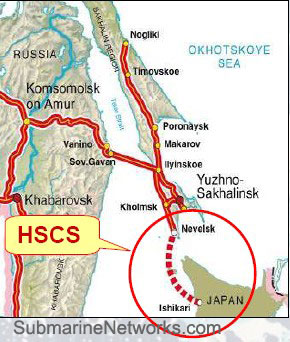 With the seamless combination of the Hokkaido-Sakhalin Cable System (HSCS) and the Europe-Russia-Asia (ERA) terrestrial cable, TTK and NTT can offer an alternative route for the Eurasia Highway, with a latency comparable to that of the terrestrial cable route via China and Russia and much lower than those via Indian Ocean and Trans-Pacific. Following figure shows the latency or round trip delay (RTD) over different routes of the Eurasia Highway. 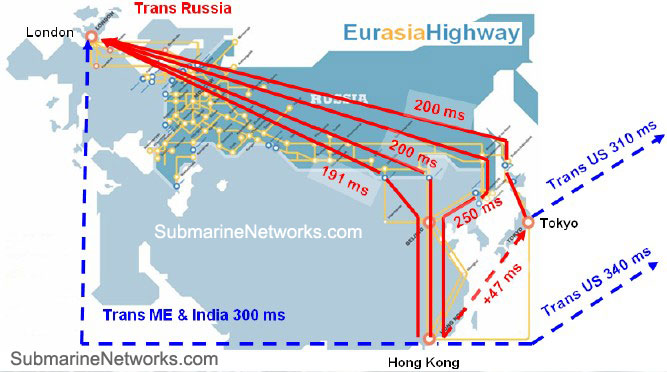 Take Hong Kong and London as two ends of the traffic, the latency or round trip delay (RTD) over different routes of the Eurasia Highway is approximately:

On the other hand, the activation of another submarine cable connecting Japan and Russia, the Russia-Japan Cable Network (RJCN) which was launched two months after the Hokkaido-Sakhalin Cable System (HSCS), further enhences the diversity of the Eurasia Highway via Japan.