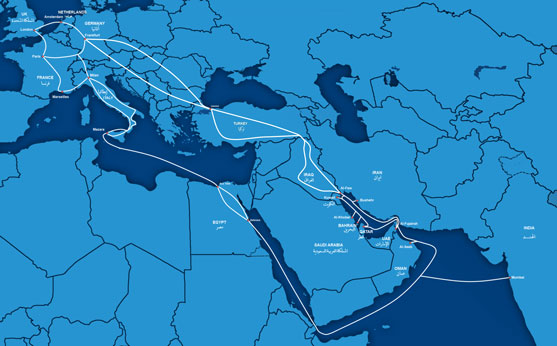 Click here to enlarge the BGI cable map
“GBI’s route through Iraq and Turkey represents a major milestone for both regional and international communications,” said Ahmed Mekky, Board Member and CEO of GBI. “This more direct route will lead to faster connectivity via lower latency times, and the diversity we offer will reduce the likelihood of a reoccurrence of the three day internet outages of 2008. This investment is in line with our vision to connect the world to the Gulf and strongly underpins the continued ICT development across a region home to one sixth the world’s population. In addition, Iraq is now emerging as a modern communications hub, with significant implications for the nation’s economy and long-term development.”
The new GBI North Route provides connectivity from the cable landing station at Al Faw, in the south of Iraq, crossing Iraq and Turkey to Istanbul, and onward to Frankfurt in Germany. While the GBI South Route, connecting Europe to all of the Gulf countries via the Mediterranean, Egypt and the Red Sea, was ready for service in Feb 2012, and activated full 100G connectivity between the Red Sea and Milan PoP. And the GBI cable also runs eastward to Mumbai in India.
The seamless GBI cable routes offer true route diversity between Europe and the Gulf.
GBI was named the Best New/Niche player of 2012 by Capacity, and best Telecom’s Technology Investment of 2012 by CommsMEA, and the Cable of 2012 by Submarine Cable Networks.