Omantel announced on 22nd March 2016 that it has joined in a consortium with several East African telecommunications providers to lay the Gulf to Africa (G2A) undersea fibre-optic cable, which is set to revolutionize connectivity from Oman to East Africa, including; Ethiopia and Somalia. The G2A undersea cable represents the first phase of Omantel’s expansion eastwards into the African continent, providing cable connectivity to the Middle East, Asia and Europe and transforming Oman into a communications hub of the Middle East.

The G2A undersea cable consortium includes Omantel, Ethio Telecom from Ethiopia and Golis Telecom and the Telesom Company from Somalia. The state-of-the-art cable system, scheduled for completion by the end of 2016, will comprise 1,500km Subsea segment and a 1,500km terrestrial segment with a capacity 20Tbits of capacity with the latest 100G technology. 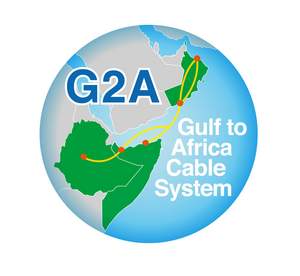 Commenting on the regional and global importance of the G2A project, the Vice President of Omantel Wholesale Sohail Qadir noted, “This is the first step in our journey of expansion into Africa. We will connect Oman directly to Somalia via the Salalah cable landing point, and then extend the cable further into Africa to Ethiopia. Somalia and Ethiopia, currently two highly underserved countries, will soon be connected to our international low-latency network, and in doing so will gain access to all the content hosted in Oman through Omantel and deliver services from Europe and Southeast Asia.”

The G2A undersea cable is central to the Omantel 3.0 transformation strategy, which aims to transform Oman into a regional communications hub. Currently under implementation, and augmenting the 3.0 growth strategy is the BBG cable which is set to be the first undersea cable that will directly connect the Middle East with Singapore.

Similarly, the existing EPEG cable, a terrestrial cable connecting Oman to Germany via Iran, Azerbaijan, Russia and Ukraine will offer services to the region at the lowest latency and the highest quality.

“Oman, powered by Omantel, is well on the way to becoming a major communications hub for the GCC region. Already over half of the 24 international submarine cables that connect to the Arabian Gulf are connected through Omantel. In the coming years, further extending our reach internationally is a key focus for Omantel, and a central goal of our 3.0 transformation strategy. We are planning to expand our network reach by placing POPs (Point of Presence) in over 20 countries across the globe and locally host major international content through multiple data centres in the near future. Throughout history Oman has always been a gateway to the region, facilitating trade and commerce from East to West and West to East. At Omantel, we aim to continue Oman’s proud tradition, this time facilitating the transfer of information, in this new digital age,” Sohail Qadir added.

In the international wholesale arena, Omantel is considered one of the most prominent and competitive wholesale telecommunication providers in the Middle East region. In addition, it is one of the leading companies in the field of submarine cable networks and a key participant in several submarine cables, complemented by direct terrestrial links, which link Asia, Europe and America passing through Oman to meet the international capacity requirements of customers locally and internationally, thereby sustaining the Company’s leading position among its competitors. Omantel’s wholesale strategy is to be a carrier of carriers and to be the link between the East and the West for the region and beyond.