HGC and OTEGLOBE have joined forces to provide a world-class Asia-Europe connectivity solution via both companies' extensive networks and data services, including HGC's and OTEGLOBE's unique backbones in Asia and Europe respectively as well as the new Asia-Africa-Europe-1 (AAE-1) cable, where OTEGLOBE is a founding member and landing party. The two companies' networks have been interconnected at OTEGLOBE's points of presence (PoPs) in Frankfurt and HGC's PoPs in Singapore, while other landing PoPs in other major Asian cities including Hong Kong will be added in the future. OTEGLOBE and HGC signed an agreement on 15 May 2017 in Chicago, during the "International Telecoms Week" Meeting.

OTEGLOBE's connectivity solution consists a unique path for connecting Europe to Asia that is not found in other cable systems, as it combines a resilient subsea route from Asia to Europe (AAE-1), an alternative Mediterranean gateway to Europe through Chania landing station in Greece and OTEGLOBE's diverse and protected European terrestrial network.

The AAE-1 submarine cable, which was launched for service in June 2017, is one of the first unique cable systems to connect Hong Kong, Singapore, the Middle East, Africa and Europe, providing an alternative low latency route between the Far East and Europe. At the same time, OTEGLOBE is the only carrier that reaches Western Europe through Greece with two fully owned, geographically diverse networks - the Greek Western European Network (GWEN) and the TransBalkan Network (TBN), while it operates a private IP network with presence in main telecoms hubs in Europe. 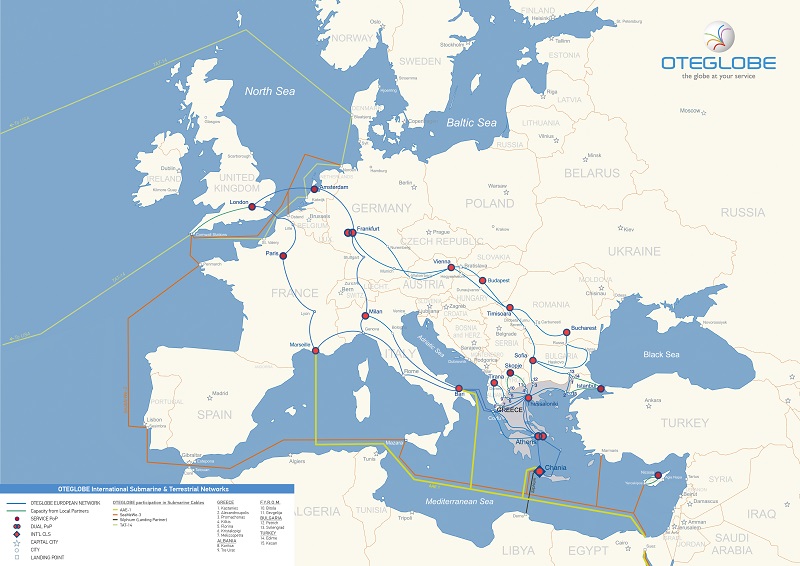 As a carriers' carrier and full-fledged telecoms service provider, HGC serves carriers, enterprises, as well as OTT providers with strong global network services that support sophisticated applications. The provisioning of AAE-1 connectivity service will provide customers with an alternative route to Europe via HGC's diverse and resilient network. With the new cable launch, HGC will become an international gateway for Asian companies to exchange traffic with the rest of the world and extend service coverage.

The new connectivity solution between HGC and OTEGLOBE will enable HGC to offer customers a unique, diverse, resilient, and low latency end-to-end solution through a reliable partner with strong presence in Europe. Such connectivity solution will help HGC's customers further extend their service coverage to Asia regions, including the fast growing Greater Mekong Subregion, and further demonstrate HGC's position as a one-stop IT and telecoms solution provider.

OTEGLOBE, on the other hand by partnering with HGC, a well-established and reliable carrier with extensive footprint and strong presence in Asia, capitalizes on its investment in the AAE-1 cable while it implements its expansion strategy plans in the region and further penetrates the blooming Asian markets.

"At OTEGLOBE we have designed a resilient end-to-end network solution, that consists a unique path and a serious proposal for the connection between Asia and Europe," said OTEGLOBE CEO Dino Andreou. "This connectivity proposal is the core of our expansion plans to Asia and it is an honor that a leading carrier like HGC identifies this opportunity and trusts us with this agreement."

Andrew Kwok, President of International and Carrier Business at Hutchison Telecommunications (Hong Kong) Limited, said: "The collaboration with OTEGLOBE on the new AAE1 subsea cable enables HGC customers to enjoy comprehensive one-stop IT and telecoms solutions in Asia and Europe along a new, low-latency and diverse path in the Eurasia corridor. OTEGLOBE and HGC are well-known and established carriers in our respective markets. By joining forces on a solution, we have further strengthened each other's position in the international wholesale telecom business."