According to press release from Australia's Sunshine Coast Governent, Sunshine Coast Council and RTI Connectivity Pty Ltd (RTI-C) have concluded a new international submarine cable contract for Japan-Guam-Australia South (JGA-S) submarine cable. Under this contract, Sunshine Coast Governent and Queensland Government will joint invest up to AU$35 million for a 550km branch to the JGA-S cable system, a new cable landing station near the Maroochydore City Centre and the land-based infrastructure. The JGA-S submarine cable project is expected to deliver up to 864 new jobs and stimulate AU$927 million in new investment in Queensland.

Mayor Mark Jamieson said Sunshine Coast Council was the first local government in Australia to secure an investment in an international submarine cable and in an increasingly digital world, the value of this investment for the region’s future could not be understated. This infrastructure investment will result in a significant point of difference for the Sunshine Coast.

The project includes a new cable landing station near the Maroochydore City Centre and a 550km undersea fibre optic cable which will connect the Sunshine Coast to the Japan-Guam-Australia South (JGA-S) submarine cable that is currently being delivered by a consortium involving RTI-C, Google and AARNet. At Guam, the JGA-S cable system will connect to the SEA-US Cable System connecting and South-East Asia and the United States, and connect to the JGA-N to Japan. 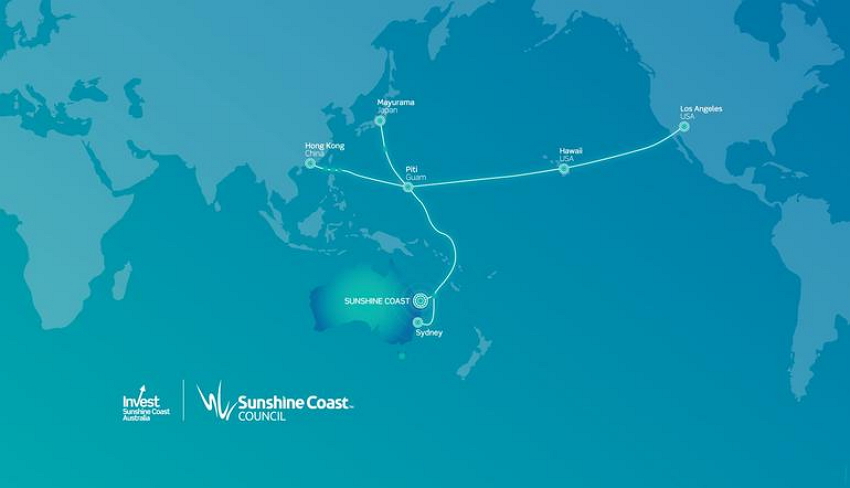 "The Sunshine Coast will provide the fastest, most affordable international connection point for Queensland and Australia to Asia, providing a significant step-change in Queensland’s attractiveness as an investment location. This project will stimulate investment and jobs growth on the Sunshine Coast thanks to the superior telecommunications connectivity and data infrastructure and could serve to attract some of the world’s biggest data users to our region. This game-changer will transform the Sunshine Coast and open up enormous opportunities for Queensland.” Mayor Jamieson said.

Minister for State Development, Manufacturing, Infrastructure and Planning Cameron Dick said the Queensland Government was providing AU$15 million towards the project from the Jobs and Regional Growth Fund following a commitment made at the last election.

Australia’s internet needs serviced by a limited number of undersea cables coming into Sydney and Perth – a risk and limitation for Australia’s internet connectivity and commercial data centre capacity. The landing of the JGA-S submarine cable on the Sunshine Coast will not only diversify the landing locations for telecommunications traffic, but will also provide speed, reliability and capacity improvements for the whole of the state.

A modern and growing knowledge-based economy relies on access to high-speed communications networks to ensure fast and reliable delivery of services across our state, from key social services to telehealth in our hospitals. This initiative will bolster connectivity and reliability of these networks, and the services that rely on them, benefiting all Queenslanders.

“This landmark project will transform the way the Sunshine Coast runs and open up enormous opportunities for Queensland.” Mayor Jamieson said most of Queensland’s data and voice communications currently travelled to Sydney via land, before heading to its international destination through submarine cables.

“To have all Australian east-coast international cables landing in Sydney is not only more expensive, it’s a huge business and national security risk if those cables are damaged at the same time.”

Mayor Jamieson said the international submarine cable – which would connect to a new cable landing station near the Maroochydore City Centre - would increase data transmission speed, provide greater redundancy and should, over time, lead to a reduction in international communications costs for business and consumers.

“New cables and new technology have tended to drive down prices and create a more efficient environment. Our ratepayers will also benefit from the agreements we have reached with RTI-C because council will receive a revenue stream from customers accessing the JGA-S cable network through the Sunshine Coast cable connection. Once again, our council is at the forefront of thinking outside the square, securing new revenue sources and pursuing opportunities to generate economic and employment growth as a major dividend for our residents, thus ensuring we continue to be Australia’s healthy, smart, creative region. It also fulfils another key commitment I made in the lead up to the 2016 local government election."

“Arguably, the submarine cable will be the leader in our suite of game-changers for this region. "

This new path will deliver traffic into and out of Australia faster than the Sydney route because it is geographically closer to mainland China and Hong Kong, where there are over 1.1 billion people; to Japan where there are several hundred million people; and to the west coast of the United States where big companies such as Facebook, Google and Amazon are located.

Compared to other destinations, the Sunshine Coast project is one of the few cables that will be able to reach into those big cities over one network – RTI’s network.

Mr Matulich said the international submarine cable would also benefit small business because it provided better connectivity, speed and redundancy and encouraged new companies to look at the Sunshine Coast to take advantage of the connectivity to international communications infrastructure.