According to Telstra Global, the Indigo Consortium announed on Wednesday 19, Septermber 2018 a significant milestone in the implementation of the INDIGO subsea cable system with the landing of the INDIGO West cable at Floreat Beach in Perth. This marks the completion of work to lay the first section of cable across approximately 2400km from Christmas Island to Perth. Work to lay the second section of the INDIGO West cable between Singapore and Indonesia will start this month and is expected to be completed by the end of December 2018. The Indigo Consortium comprises AARNet, Google, Indosat Ooredoo, Singtel, SubPartners (acquired by Superloop) and Telstra. 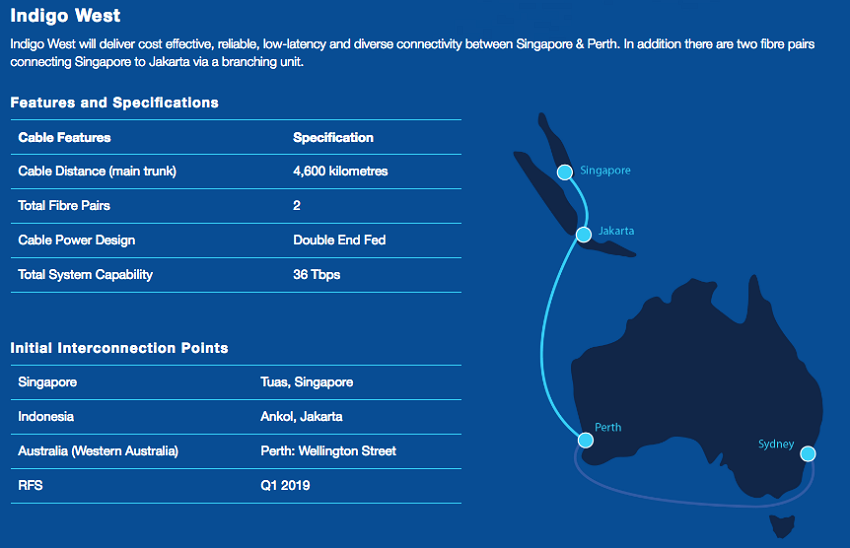 This milestone follows the announcement in April 2017 that the consortium had entered into an agreement with Alcatel Submarine Networks (ASN) to build the INDIGO cable system connecting Singapore, Perth and Sydney, with two additional fibre pairs connecting Singapore and Jakarta via a branching unit.

The ASN cable ship, the Ile de Brehat, will continue laying the INDIGO Central cable another 4600kms from Perth to Sydney. Construction of the INDIGO cable system is on-track to be completed and ready for service by mid-2019. 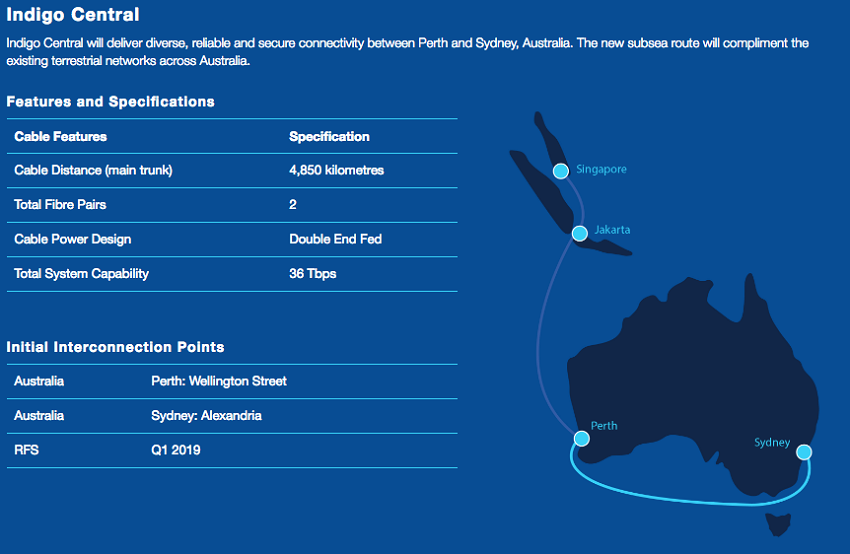 The 9,200km INDIGO cable system will strengthen links between Australia and the fast-growing South East Asian markets, providing lower latency and enhanced reliability. Using today’s coherent optical technology, the cable’s two-fibre pairs will be able to support up to 36 terabits per second, the equivalent of simultaneously streaming millions of movies a second.

The INDIGO cable system will utilise new spectrum sharing technology so each consortium member will have the ability to independently take advantage of technology advancements for future upgrades and capacity increases on demand.

Paul Abfalter, Telstra’s Head of North Asia & Global Wholesale, said: “The development of the INDIGO West cable has leveraged Telstra’s engineering expertise and the scale of our Australian network. The cable will connect to Telstra’s extensive terrestrial network to provide onward connectivity around Australia. Once complete, the cable system will strengthen links between Australia and fast-growing South East Asian markets by providing the fastest speeds and dramatically improved reliability. Our vast subsea network is a key part of our international growth strategy and we will continue to invest in additional capacity to meet the increasing demand for data and maintain our network leadership in the Asia-Pacific region.”

AARNet’s CEO Chris Hancock said: “This is an exciting time for AARNet. INDIGO is the first in a number of significant investments for research and education in Australia. INDIGO will provide the underpinning critical infrastructure to meet the future growth in collaborative research and transnational education between Australia and our important Asian partners. We are looking forward to the second INDIGO landing in Sydney.”

Singtel’s Vice President, Carrier Services, Group Enterprise Ooi Seng Keat said: “This new submarine cable will usher in a new era of high speed communications between the growing economies of Southeast Asia and Australia. This new data superhighway will complement our existing global links to Asia, US, Europe, Australia and the Middle East and allow Singtel and Optus to meet the growing demand for bandwidth-intensive applications as well as boost network diversity and resilience. We look forward to Optus landing the INDIGO Central cable in Sydney in a few months’ time further reinforcing our position as the leading provider of international connectivity and data services in the region.”

Drew Kelton, CEO of Superloop on behalf of SubPartners, commented that the completion of INDIGO will reinforce Superloop's strategic direction. “We are starting to see the benefits of our investment in infrastructure and software. The three key principles behind Superloop of fibre, wireless and Asia have never looked more compelling, relevant and timely.”

President Director and CEO of Indosat Ooredoo, Joy Wahjudi said: “We are excited with the significant progress of the INDIGO deployment. This strategic partnership will provide Indonesia with wider connection access across Australia and the fast-growing South East Asian market. We are looking forward to Indosat Ooredoo landing the INDIGO cable in Jakarta, targeting both business and retail consumer segments to be able to enjoy global access, increase their business performance and also increase their quality of life through world-class data connectivity and internet access.”