The AJC Network (AJCN), which has a design life of 25 years, was ready for commercial operation on 30 December 2001 and has been operating continuously since then. The AJC Network initial project was completed under budget and on time.

The AJC Network was designed and implemented as an optical fibre ring with historically safe sections of the route between Sydney and Guam and between Guam and Japan using a single sheath (hence the expression "collapsed ring'). This provides an optimum balance between the cable resilience and cost effectiveness. In deep water (more than 4000m), where a cable failure is very unlikely, the two fibres are laid in a single sheath. In shallow water approaching cable station landing points (less than 4000m), where on average most cable failures occur, a branching unit is used to separate the fibres that are then routed to separate cable stations. In the event of an outage to one of the shallow water branches, the traffic can be routed via the in-country connection and the other shallow water branch.

The AJC network also features SDH MSP ring technology to provide fast and reliable protection of traffic within the AJC Network, cable burial in shallow water to minimize the chance of cable failure by fishing activities and anchoring and use of state-of-the-art technology for repeaters and terminal equipment.

The Australia Japan Cable network had an initial design capacity of 320 Gbit/s protected or 640 Gbit/s unprotected, with an installed capacity of 40 Gbit/s protected, and was designed to provide an economical but highly resilient submarine cable link between Australia and Japan. The route, via Guam, was chosen to provide a safe deep-water path and the landing station sites were chosen to provide optimum connectivity between AJCN and existing and future submarine cable systems. (Refer Fig 2) 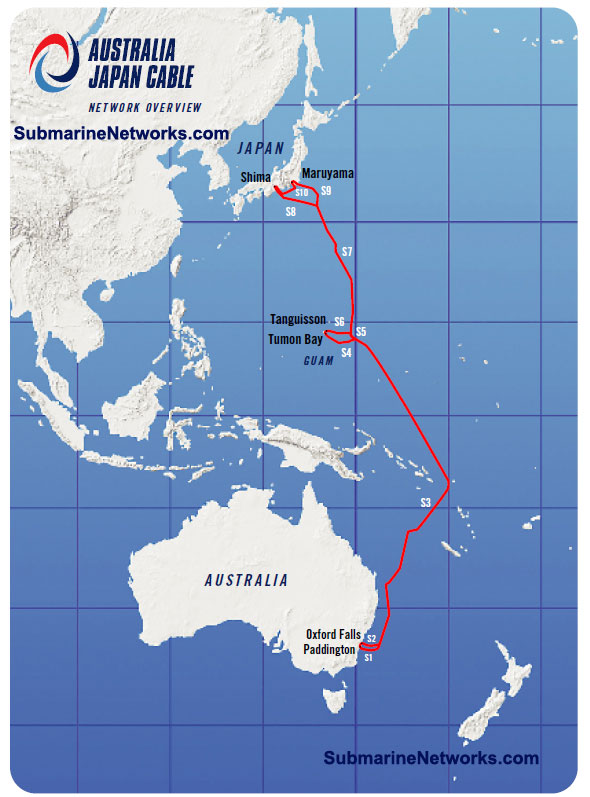 The AJC project included not only the challenges of thousands of kilometers of marine installation but the fit out of six cable stations, directional drilling for Sydney landings, terrestrial routes for closing the fibre ring in Sydney and Guam and a significant amount of permitting work to get these installations approved. While not the end of the initial installation the completion of the final splice (final joint in the end to end AJC marine cable) was a significant milestone in late 2001.