Following the launch of its Marseille Hub in 2017, Orange International Carriers continues to enhance its network connectivity and will now offer a direct connection between Marseille and Penmarch. This new terrestrial cable allows Orange to open up unique access between Asia, the Middle-East and West Africa, offering improved service, redundancy and security.

Forecasts for bandwidth growth 2017 – 2023 predict a 10x increase in volume1 between these regions and with this offer Orange interconnects 15 submarine cables in order to stay ahead of the demand. 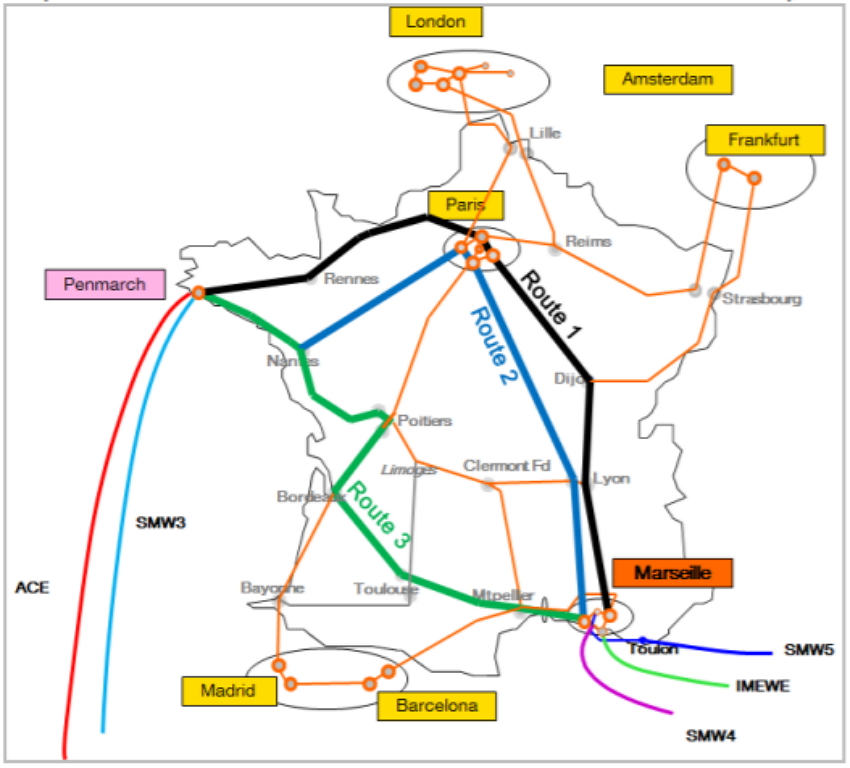 Commercialised in capacities from STM1 to 10G, the offer comes in protected or unprotected versions, which can be leased or acquired as IRU.

Three new routes will become available between Marseille and Penmarch. The first (Route n° 1 in the diagram above) is already operational with a direct terrestrial connection between the two cities. The other two routes – scheduled to be in service before the end of 2018 – will bring redundancy to the Orange offer. Each route is between 1600km – 1700 km in length, offering comparable RTDs of 18ms.

“This unique service is being added to the range of Orange solutions already available in Marseille to facilitate connections in regions where data growth is increasing significantly,” said Pierre-Louis de Guillebon, CEO of Orange International Carriers. “This is a fully Orange owned route, which will soon be automated, and it means that Orange can now offer a secure ‘all-inclusive’ solution by way of configuration, housing and operations.”

“Thanks to the new terrestrial connection developed by Orange between Marseille and Penmarch, the role and importance of Marseille as a gateway between Europe and Africa, the Middle East and Asia is enhanced” said Mike Hollands, director of market development and strategy at Interxion. “Our customers in Marseille can now directly connect to Western Africa via the ACE subsea system, bringing to over 40 the number of countries that are connected via subsea cables to Marseille. This is a significant added value for the community of interest in Interxion’s Marseille data centres.”