New Jersey Fiber Exchange (NJFX), the first and only colocation campus to sit at a cable landing station in the U.S and offers Tier 3, carrier neutral data center capabilities, announced on Tuesday its urgent work with major carriers to expedite installation of infrastructure to support a major connectivity hub in jeopardy from Hurricane Irma related power outages.

It’s more important than ever for the United States to have the infrastructure in place to avoid a loss of global connectivity.  “The way we communicate worldwide is all through the Miami, Puerto Rico and New York City gateways,” states Gil Santaliz, CEO for NJFX. “If Miami went down, the only way to communicate to Europe and South America is through Puerto Rico. We are in contact right now with major carriers that supply connectivity to large, international companies and are looking to keep networks up and running. They are confidently turning to NJFX and rest assured that their needs will be met.”

Santaliz adds, “If New York’s telecom infrastructure is impacted either through natural or other disasters, then major carriers and telecoms will be adversely affected. Because NJFX has an optimal location in New Jersey, which bypasses legacy chokepoints and the congested NYC routes, we play a major a role in making networks work. NJFX offers a critical solution for multinational businesses and carriers in the U.S.”

NJFX’s New Jersey location is 64 feet above sea level, making it impervious to tidal surge and ideal for disaster recovery. NJFX clients can diversify their connectivity options to key hubs across North America, Europe, South America and the Caribbean. Through its many partnerships and more than 10 carriers and service provider partners, NJFX clients have direct access to any carrier’s suite of services in the NJFX ecosystem, without incurring cross-connect fees. 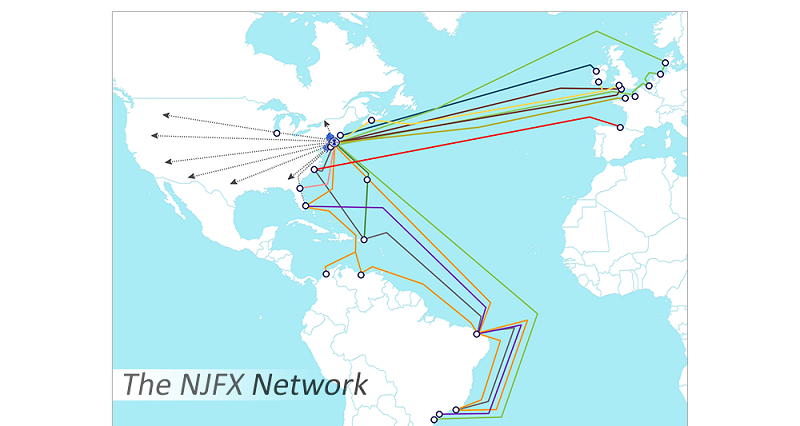