Myanmar is undergoing great changes and reform. With the bidding and award of two mobile licenses to international operators, Norway's Telenor and Qatar's Ooredoo, Myanmar's reform on telecom sector has caught worldwide eyeballs. From various information, it is obviously that Myanmar is planning several projects to boost its international telecommunications capacity, to meet the requirement for the development of broadband internet in Myanmar.

There is a population of 55.4 million in Myanmar, with an internet penetration of approximately 0.44%. Currently, the domestic bandwidth is about 20 Gbps and the international gateway bandwidth is less than 4Gbps .So far, there is only one international submarine cable landing in Myanmar. The SMW3 lands at Pyapon Cable Landing Station. Myanmar is planning to connect the SMW4 submarine cable network through the terrestrial cable between Myanmar and Bangladesh. Meanwhile, there are cross-border terrestrial fiber cables between Myanmar and China, India, Laos and Thailand respectively. 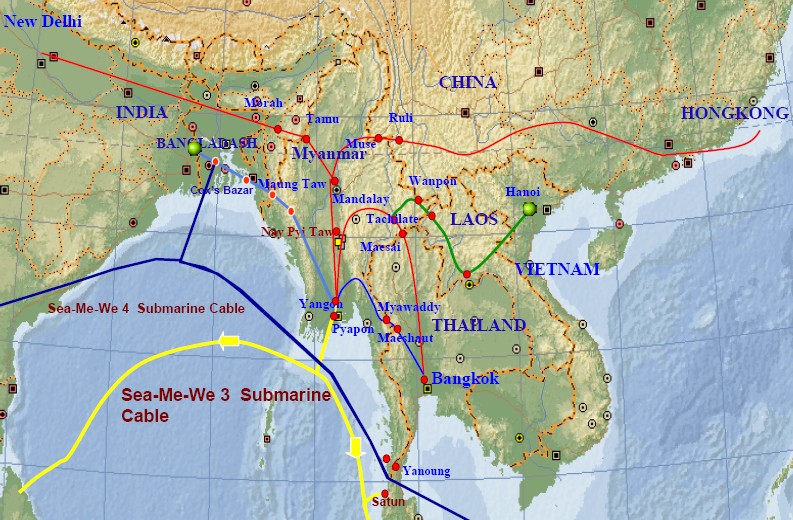 Right now, Myanmar puts most of its international traffic through gateway between Myanmar and China. Thailand is keen to provide Myanmar international data transmission as an alternative to its current route via China, as promoted by the Minister of ICT of Thailand, Mr. Anudith Nakornthap, at the World Economic Forum on East Asia in Myanmar’s capital of Naypyitaw on June 5-7, 2013. From global perspective, of course, it is hard to believe that Thailand would be a good alternative for Myanmar to expand its international bandwidth and connectivity.

Myanmar is planning more aggressive approaches to boost its international capacity with their own solutions.

According to Myanmar Times, Myanma Posts and Telecommunication (MPT) plans to connect Myanmar to the SEA-ME-WE 5 (SMW5) cable. It is expected that the SMW5 cable system will land in Myanmar and enable Myanmar not only high capacity but also diversity other than the SEA-ME-WE 3 (SMW3) cable and other terrestrial cables to Thailand and China.

Meanwhile, MPT is strengthening its partnership with Chinese carrier to upgrade its terrestrial cable system to China and try to build a new China-Myanmar International (CMI) cable, which stretches about 1500 km from Ruili, China to Nwge Suang, Myanmar. The CMI cable will not only substantially improve MPT’s domestic backbone capacity, but also facilitate MPT with huge and reliable bandwidth northwards to reach China, South-East Asia and the USA. Further more, the CMI cable is going to seamlessly interconnect with the Asia-Africa-Europe 1 (AAE-1) cable which plans to land at Nwge Suang Cable Landing Station.

If the projects go smoothly and successfully, Myanmar may substantially boost its international capacity and enable with diverse cable routes, including: