Beijing, October 13, 2011 -- China Telecom and Orange yesterday signed a strategic partnership framework agreement in Beijing in order to make the most of the complementary aspects of their networks and services. Mr.Stéphane Richard, Chairman and CEO of France Telecom-Orange, and Mr. WANG Xiaochu, Chairman of China Telecom executed the agreement.  The new partnership may signal that Orange has abandoned its former Chinese partner, China Unicom.

Commencing with the enterprise and wholesale segments, Orange and China Telecom see great advantages in cooperating in the rapidly evolving, global enterprise market and believe a close business relationship will bring benefits to both by leveraging China Telecom’s strengths in China and the Asia Pacific region, and Orange’s distinct geographic reach in Europe and Africa.

The agreement, which may be extended to other areas at a later date, covers cooperation in several specific areas including IPVPN cooperation, managed services, network resources cooperation, WiFi roaming.

Upon execution of the strategic partnership framework agreement between Orange and China Telecom, it signals that Orange has abandoned its former Chinese partner, China Unicom.

In 2001, Orange formed a strategic partnership with China Netcom Corp. (CNC) and signed a 10-year agreement for offering full suite of services within China. Currently,Orange Business Services and CNC have a dedicated data network covering 20 key cities, which is approximately 95% of the MNC space within China. As of today, this announcement on the partnership between Orange and CNC is still shown on Orange's website. As reported by legacy CNC staff, the strategic partnership between Orange and CNC is exclusive for certain extent. 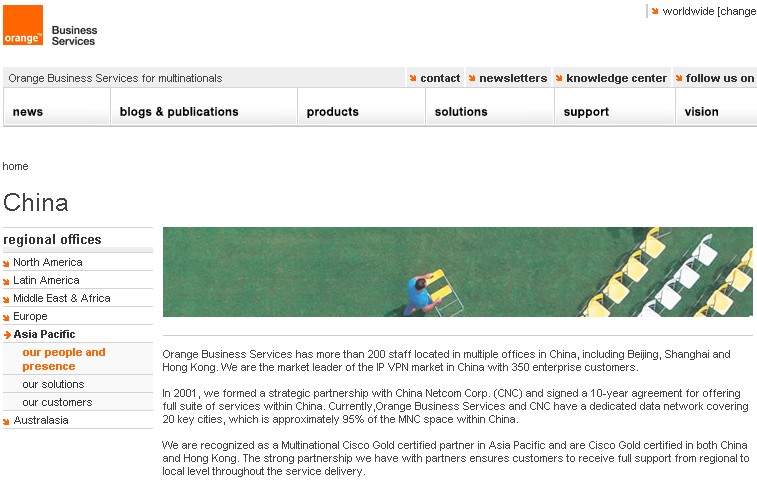 CNC has built an MPLS-VPN network in more than 20 key cities in China since 2011. The MPLS-VPN network, well-known as E-NET, was dedicated for Oange's customers in China. The partnership with Orange was quite successful in early years and was one of the most importance revenue sources of CNC. At that time, although CNC was a small and new operator with only less than 5000 staff, CNC's data business was good enough to threaten the monopoly China Telecom.

In 2002, China Netcom Corp. (CNC) was merged into China Netcom Group which was later consolidated with China Unicom Group in 2008. After each reorganization, the service to Orange was encountered a further degrade.

China Telecom has been seeking business with Orange since the era of China Netcom Group. And Orange also desires reliable Chinese partner to align its services in China with the worldwide level.  As of now October 2011, the exclusive obligations of Orange may have been expired. Orange and China Telecom can now dance together for new honey years.