In a blog post by Google Global Networking experts Valey Kamalov and Mattia Cantono on Friday,  Google unveiled a recent experiment using its subsea cables to detect earthquakes and tsunamis. Google has developed a technique which is capable of dectecting earthquakes and tsunamis over tens of thousands of kilometers away, using current in-service subsea cables and equipment that is present on the vast majority of the world’s existing subsea cable systems. 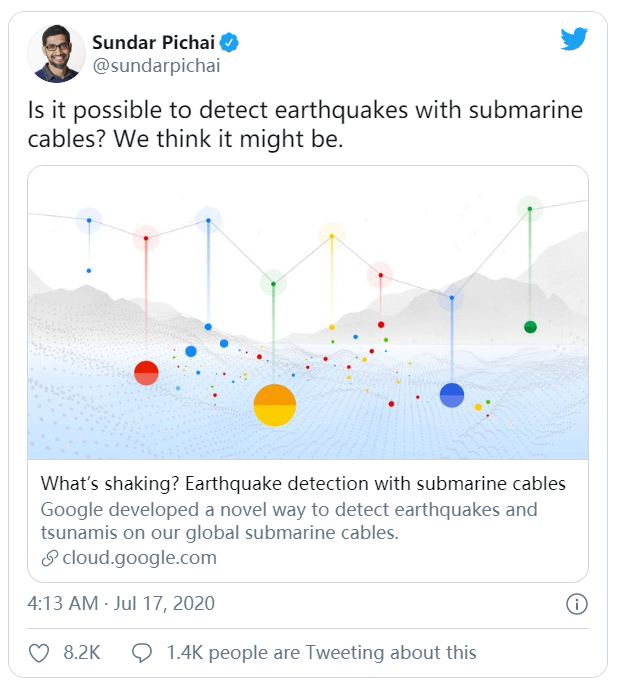 Compared with above research by French scientists, Google's experiment and technique has taken a big step forward.

Most of traditional techniques are effective over distances of up to 100 km, Google has developed a technique that works over tens of thousands of kilometers. And while previous approaches require special sensing fiber and special equipment, Google uses existing fiber to detect disturbances on the seafloor.

Further more, Google's technique relies on equipment that is present on the vast majority of the world’s existing fiber optic systems, so it is broadly applicable.

At the end of 2019, Google researchers began to monitor the state of polarization (SOP) of some of its submarine cables around the world. In the initial field test, Google researchers observed that the state of polarization (SOP) was very stable after the optical signal was transmitted through a submarine cable system about 10,500 kilometers long. It shows that the seabed was in a quiet state during this period, that is, there was no seismic activity.

On January 28, 2020, Google researchers detected a magnitude 7.7 earthquake that occurred near Jamaica, 1500 km away from the closest point of one of Google's submarine cables used for the experiment.

In the months after the Jamaica earthquake, Google researchers also monitored multiple moderate-strength earthquakes, some of which were closer, and some were even longer.

On March 22, 2020, Google researchers detected a magnitude 6.1 earthquake that occurred in the East Pacific Rise, 2,000 kilometers away from the subsea cable used for the experiment.

Subsequently, Google and California Institute of Technology conducted joint research. The research shows that Google's technique can not only detect earthquakes caused by tectonic plates, but also detect pressure changes in the ocean itself, which could help predict tsunamis.

Today, most tsunami warning equipment is either on shore or scattered in the ocean. The former cannot give coastal communities enough time to evacuate, while the latter is limited by the speed of traveling waves-the maximum speed of deep sea waves is 800 kilometers per hour, and it takes a long time for the early warning signal to reach the monitoring equipment. On the contrary, when the tsunami warning signal is detected through the submarine cable laid on the seabed near the earthquake epicenter, the warning signal will be transmitted to the monitoring center within a few milliseconds at the speed of light.

In this way, Google's achievement is of great importance.

Although Google’s research and application are only in the early stages, if the more than 1.1 million submarine optical cables that have been laid around the world can be used, it is possible to form a huge and economical global submarine earthquake and tsunami monitoring network, which is a dedicated seismic sensor And the monitoring network provides supplementary information sources to improve the early warning of global earthquakes and tsunamis.