Prices for wholesale IP transit services continued to decline globally over the last few years.
TeleGeography has identified that GigE ports declined at a compounded annual rate of 34% in London, 28% in New York, 26% in Hong Kong and 20% in São Paulo between Q2 2009 and Q2 2012.

Although prices have declined globally, significant geographic differences remain. TeleGeography notes that the median GigE price in Hong Kong has remained 2.7 to 5.1 times the price of a GigE port in London over the past three years. 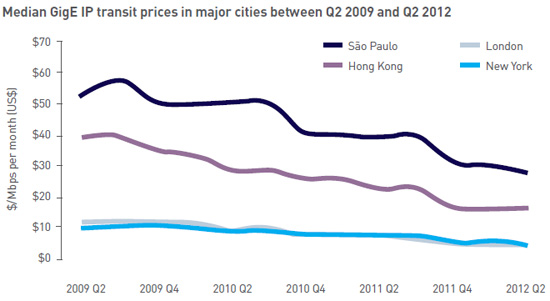 Between Q1 2011 and Q1 2012, links to Asia and Latin America experienced the greatest declines. In particular, 10Gbps median monthly lease prices on the Los Angeles-Tokyo and Miami-São Paulo routes fell 37% and 31% respectively. 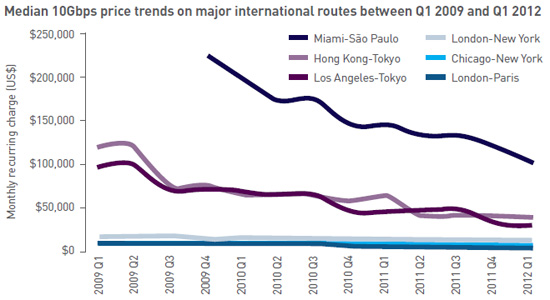 Growth in global demand for international bandwidth declined for a third straight year in 2011. Although the pace of growth has slowed, TeleGeography indicates that demand still increased at a robust rate of 45%.

Carriers reached an impressive 67Tbps of capacity on their international internet, private and voice networks in 2011, which is six times the 11.1Tbps in service in 2007.

Overall, TeleGeography identifies a “sustained appetite for bandwidth”, which it believes will continue to drive the development of terrestrial and submarine links worldwide. 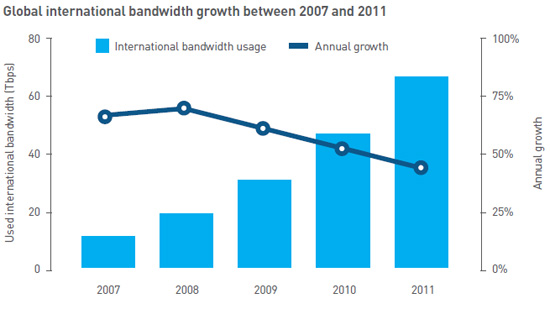 TeleGeography describes this as a “brisk” pace of growth, which despite slowing since 2008 has still ensured that aggregate capacity requirements are more than doubling every two years.

TeleGeography indicates that broadband subscriber growth is the major driver of bandwidth demand in the Middle East and Africa, where the number of subscribers grew from 9.4 million to 19.4 million between 2007 and 2011. 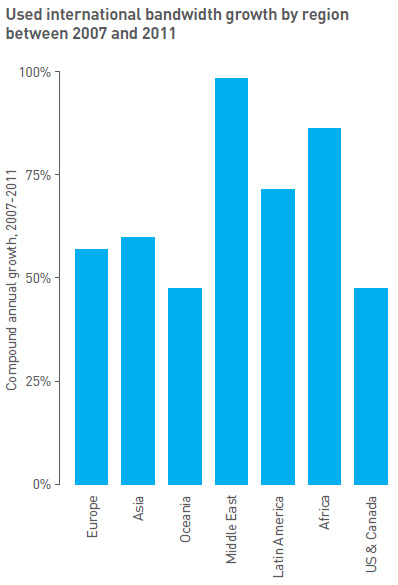 TeleGeography indicates that there has been a decline in the growth of broadband subscribers in Europe and North America. Instead, international bandwidth growth in these regions is being fuelled by an increase in average broadband access speeds, enabling more frequent use of high-bandwidth applications such as video.

Cable operators can light capacity incrementally as demand dictates, up to the system’s total potential capacity.

According to TeleGeography, lit capacity increased on all major subsea cable routes between 2007 and 2011. Potential capacity on major subsea routes is also growing, meaning a large amount remains untapped. This has been driven by advances in optical technologies, which allow subsea cables to be upgraded well beyond the original estimates.

Transatlantic subsea cables have experienced an increase in potential capacity with the introduction of 40Gbps technology.

As a result, the percentage of potential transatlantic capacity that is lit decreased from 25% to 19% between 2009 and 2011. 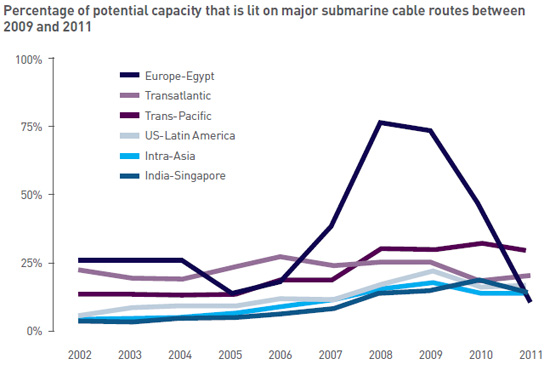