CMC Telecom was nominated as one of the Top 5 most influential enterprises in Vietnam’s internet industry over the past decade (2007-2017) on Internet Day, November 22, at an event hosted by the Vietnam Internet Association in cooperation with ICTnews in celebration of the 20th anniversary of the internet in Vietnam.

The Top 5 Award was presented to the company for its efficient and excellent contributions to policies and strategies for internet growth in Vietnam, developing internet users, providing internet access to many more people, and growing value-added services (VAS) applications or digital services on the internet. 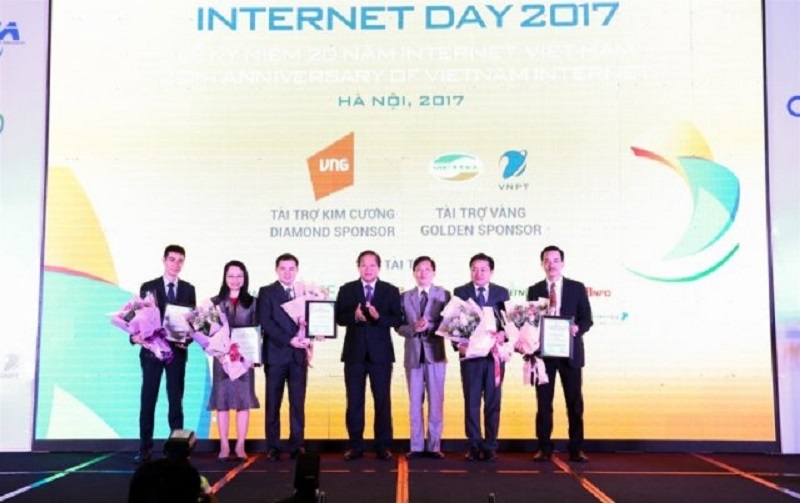 CMC Telecom was established in 2008, eleven years after November 19, 1997, when Vietnam first gained internet access. Under the CMC Corporation’s strategy, CMC Telecom was the pioneer in providing ICT and telecommunications solutions to enterprises.

In 2009, CMC Telecom was a pioneer in commercial GPON deployment, providing FTTx internet after one year of research, design, and a successful pilot. At that time, while technologies such as AON and EPON were dominant, GPON was only standardized and deployed in Europe.

In the decade from 2007 to 2017, to differentiate itself in the market, CMC Telecom has done its best to identify the most optimal solutions for enterprises. Not only local customers in the finance and banking and telecommunications sectors, ministries and other government agencies, organizations, and e-commerce providers, but also 40 out of the 100 most valued brand names in the world, as selected by Forbes in 2016, also trust CMC Telecom. Familiar names include Google, Microsoft, Facebook, IBM, Amazon, Cisco, Verizon, Siemens, Toyota, Samsung, Pepsi, Visa, HSBC, Nestle, Colgate, Hyundai, Sony, Panasonic, Canon, Uniqlo, and Prada. CMC Telecom is the first telecommunications infrastructure company in Vietnam to integrate VAS and high-value information technology services on the internet platform via the one-stop-shop model.

CMC Telecom has a desire to help enterprises and its partners feel safe in developing and succeeding in a multi-dimensional sharing and collaborative environment. It continues to build diversified ICT eco-systems from its leased lines, online data center, voice, voice over internet protocol (VoIP), managed security services, Office 365, and cloud computing services. It marked its new development in 2016 by proving itself as the first provider to bring global IT-managed security services to Vietnam. CMC Telecom became an official IBM and Microsoft partner, exclusively providing information security and cloud computing services to Vietnamese companies and foreign organizations in Vietnam.

Regarding CMC Telecom’s development vision after being selected in the Top 25 telecommunications enterprises in Asia-Pacific with the most potential in 2016, CMC Telecom’s CEO, Mr. Ngo Trong Hieu, told CIO Outlook: “Starting out as a private company with a focus on technology and services, CMC Telecom has approached and satisfied major local and regional customers, gradually expanding its services.”

After launching its third online data center in November, CMC Telecom aims to build a fourth in 2018 and become the No. 1 cloud computing service provider in Vietnam.

“Targeting the region, our new Cross Vietnam Cable System, more than 2,500-km long and co-built by CMC Telecom and TIME dotCom, is the first backbone in Vietnam belonging to the Cross Asia Cable System (A-GRID) running through five countries: Singapore, Malaysia, Cambodia, Thailand, and Vietnam,” said Mr. Azhar Bin Adnan, CMC Telecom’s Chief Marketing Officer. “This is not only a strategic move by us but is also our network corridor to expanding our business, starting from Southeast Asia.”