According to Reuters, Brazilian President Dilma Rousseff  promoted and confirmed on the EU-Brazil Summit 2014 on Monday to lay an undersea communications cable from Lisbon to Fortaleza to reduce Brazil's reliance on the United States after Washington spied on Brasilia. And Brazil and the European Union have agreed the $185 million Brazil-Europe submarine cable project. Earlier this month, Telebras unveiled the plan to form a joint venture with Spain's IslaLink Submarine Cables to lay and operate a Brazil-Europe submarine cable. 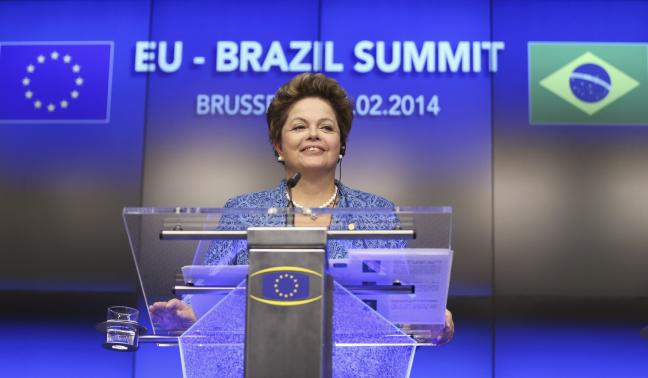 At the EU-Brazil Summit in Brussels, Brazilian President Dilma Rousseff said the $185 million cable project was central to "guarantee the neutrality" of the Internet, signaling her desire to shield Brazil's Internet traffic from U.S. surveillance.

Rousseff postponed a state visit to Washington last year in protest at the U.S. National Security Agency spying on her email and phone and is now seeking alternative routes to U.S. cables.

There are now several submarine cables connecting Brazil and the U.S., including GlobeNet, America Movil-1, SAm-1. As an international wholesale provider of submarine capacity and a wholly-owned subsidiary of Oi, GlobeNet is the major submarine cable for the coming FIFA 2014 in Brazil. Another submarine cable providing the first direct route between São Paulo and New York, the Seabras-1 submarine cable system is expected to be completed in August 2015, according to latest news from Seaborn Networks.

Brazil relies on U.S. undersea cables to carry almost all of its communications to Europe. Even most of the traffic for the coming FIFA events has to be routed to the US first and then onward to Europe and worldwide.

There is now only one submarine cable between Europe and Brazil, the ATLANTIS-2 submarine cable system which was lunched for service in 1999, and is now mainly used for voice transmission.

On this one-day summit, Rousseff clearly took heart to promote and support the calls of a European Internet that is protected from U.S. surveillance, even if there are questions about the practicalities of setting up alternative networks in Europe. And laying a cable from the Portuguese capital Lisbon to the northeastern Brazilian of Fortaleza seems the urgent and feasible action for Brazil to shift their internet traffic from the US to Europe.