Private global networks for multinational companies are based on promised physical network diversity. If pushed for additional clarity, maybe a KMZ, route map or subsea cable listing would be provided.  This is a solid approach but is only good for that specific time and that specific setup. There are thousands of miles of subsea cables bridging the gap between you and your colleague in Brazil, or your leadership team in London, or the data center that is hosting the app you just launched. Today, with our aging subsea system and technology like MPLS becoming old-school with SDN platforms reducing costs and increasing performance, traditional carriers need to educate their Enterprise customers on a new reality in terms of local and global network diversity. 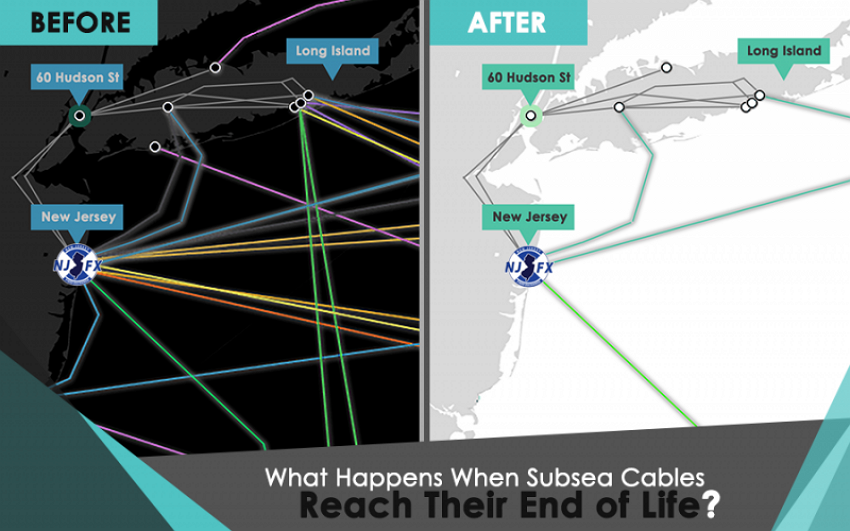 The majority of the cables in the Atlantic Ocean were put into service between 2000 and 2001.  Like most things, subsea cables have a shelf life. And unlike wine, they do not get more expensive with age, quite the opposite. It becomes more difficult to financially support repairs and although there is less available capacity, new customers are brought on at much lower price points. The result is a cable’s retirement depends on both being physically operational and on the costs associated with continuing to operate it. Financially, this countdown usually begins around 20 years while physically, the cable and electronics are manufactured to last about 25 years.

So, what all of this means is that we are on the verge of a massive shift for Atlantic subsea cables, an event Telegeography recently called “the next mass extinction”. This is truly an event that has not been seen before and one that will create choke points throughout the northeast as well as possibly isolate legacy network hand off-points.

Can Your Network Survive?

When the latest upgrade of cable systems was completed nearly 20 years ago, smartphones barely existed. The bandwidth needs were there, but the amount of access points and demands were served by multiple systems. The bandwidth players had redundancy built across these cable systems to support their needs. However, bandwidth growth and demands have surged. Cisco Global 2020 Forecast predicts global Internet traffic will be 5.3 exabytes a day by 2020. In perspective, this means that global internet traffic will be the equivalent of 55 million DVDs per hour.

This anticipated growth is staggering. One of the ways the industry is addressing this growth is through new subsea cables. Nigel Bayliff, CEO for Aqua Comms and a longtime industry leader says, “Fifteen years ago, there were seven to eight cables that were built, and those cables were part of a massive oversupply to the requirements of the day. Pricing for the building of cables shot through the roof.” While this left an oversupply in the market at the time, all of that is coming to an end due to the massive amounts of bandwidth demands and requirements of enterprises, carriers, Over-the-Top (OTT) providers, financial firms, government entities and other high capacity organizations. Aqua Comms is part of a consortium operating a new cable, named HAVFRUE/AEC-2, that will have 18-20 terabits of capacity per fiber pair. Compared to the existing cables which were approximately 5 terabits, the new cable will more than handle all the jeopardized capacity. Additionally, 10G has been the standard for US based multinational banks and now some of those banks’ engineers are asking the hard questions such as, “How do I get to the CLS, can I cost effectively get my own dark fiber and pick my subsea cable access at 100g or 400G and fast?!” Banks are also looking at how operations might change if bandwidth is no longer an issue inside the network in the US and globally, when it comes big data applications.

Collateral Damage from the Subsea Shift

As an established financial hub, New York has long been the center of the universe for telecommunications. It makes sense, when you think about the numerous cable landing stations that are on Long Island. It’s a vast data center landscape with other subsea systems having their hand-off points in the city. Yet although a subsea system may land in, say New Jersey, customers were only able to access the system from legacy carrier handoffs, or PoPs.  As these new cables become ready for service, they are driving another shift, which is away from legacy landing points and bandwidth handoffs.  NJFX in Wall, New Jersey is a perfect example. The site was chosen as the landing point by the consortium which operates HAVFRUE in large part due to NJFX’s location, which is far enough outside New York to avoid congestion. NJFX offers route diversity to the rest of the country and most importantly provides Tier 3 data center options right at the actual cable landing.

There is a Bright Future

All of this activity and shifting has forced an evolution, a sea change. It coincides with most examples of old ways of doing business being surpassed with a new approach. The tricky part is the timing of cable retirement is harder to predict.  What is not difficult to see is that there are new cables with great capability coming online. These cables interconnect at improved hubs with partners that have network elements up and running and able to provision in near real time securely and efficiently.  This extinction is not an end, but rather a new beginning for what is sure to prove out to be a much stronger model.