The epicentre of action for connectivity driven growth in business operations that are in various stages of digital transformation led by hyperscale growth of Cloud, Content, Broadband Internet and Enterprise WAN is unarguably shifting to APAC. Of all the geographic regions globally, APAC with a cluster of 15 countries including Australia and New Zealand has unique geographic spread with multiple developed and rapidly developing countries with surging industrialization and buoyant knowledge economies topped with liberalized regulatory frameworks that encourages healthy competition with growth in telecom infrastructure.

The growth drivers are stimulating demand generation of unprecedented scale and volume of connectivity and interconnect requirements as exemplified in Figure 1a and Table 1a that shows steep growth in number of submarine cables from 2015-20. Aggressive participation of Google, Facebook, Amazon and Microsoft has added unprecedented incredible momentum and changed the rules of the game for submarine cable built and capacity purchase. This has led to a very unique and unparalleled submarine cable landscape spanning 16 countrieswith 44 international submarine cables, landing in 91 cable landing stations an involving 58 co-owned and fully-owned stakeholders. This creates a unique regional play for submarine cables that this articles aims to characterize quantitatively. 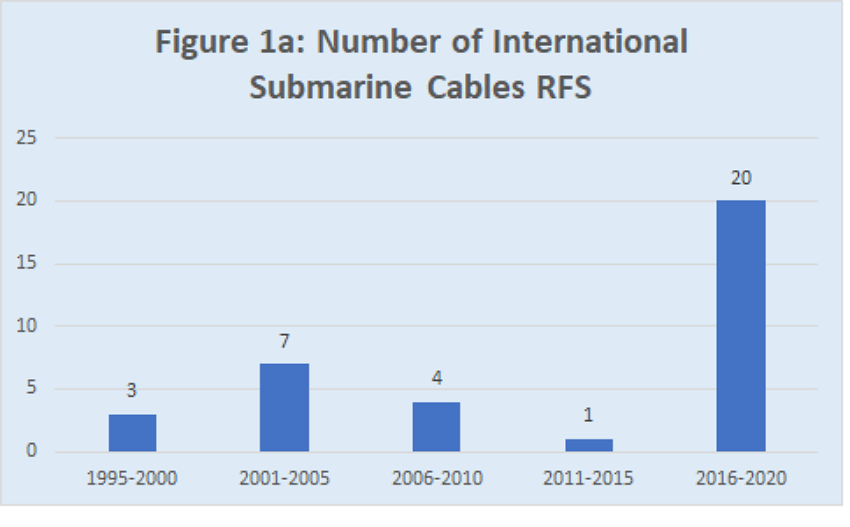 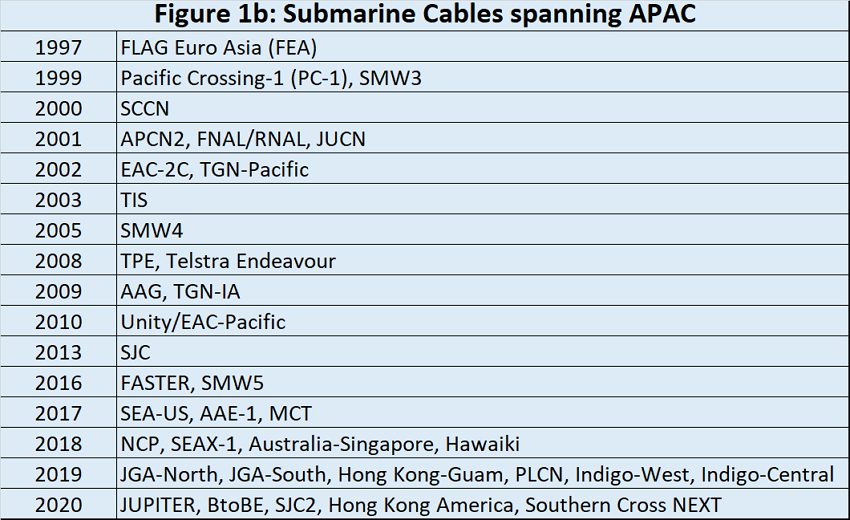 The following Figure 1b from Telegeograpy shows an interesting trend of decentralization in APAC that is also seen in transatlantic route, where submarine cables post 2015 are distributed across Hong Kong, Singapore, Taiwan, South Korea, Malaysia, Philippines and Indonesia, a marked evolution from Japan centric submarine cables prior to 2015. Though not part of APAC strictly, the influence of Guam and Hawaii as key interconnect locations for transpacific connectivity built, is set to influence regional submarine cable dynamics considerably. 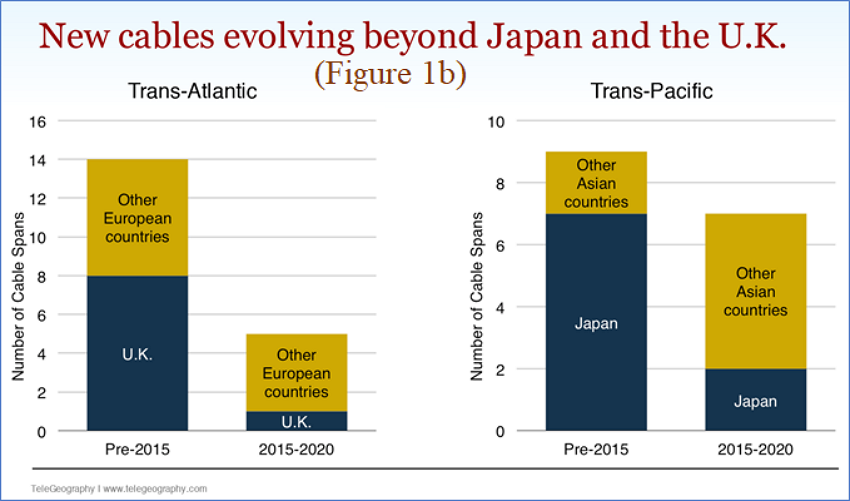 Most of the countries in APAC has 2-3 dominant telco carriers, each pursing growth ambitions and developing competitive differentiators aggressively. This creates a highly competitive regional landscape with multiple connectivity options. The common objective amongst the telco carriers is to have co-ownership in multiple submarine cables to provide connectivity along three corridors – Intra-APAC, APAC-US and APAC-India/ME/Europe. The fourth corridor gaining traction is APAC-Australia. 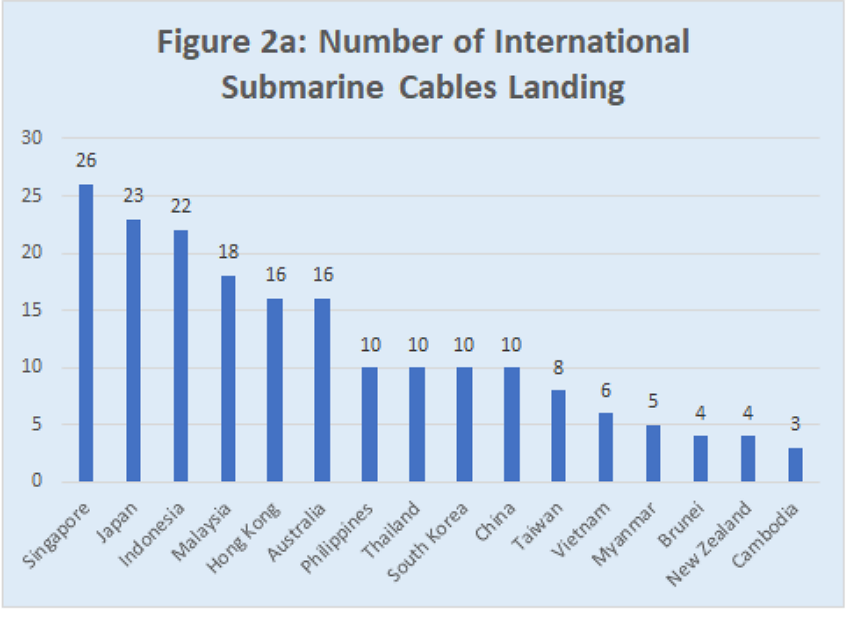 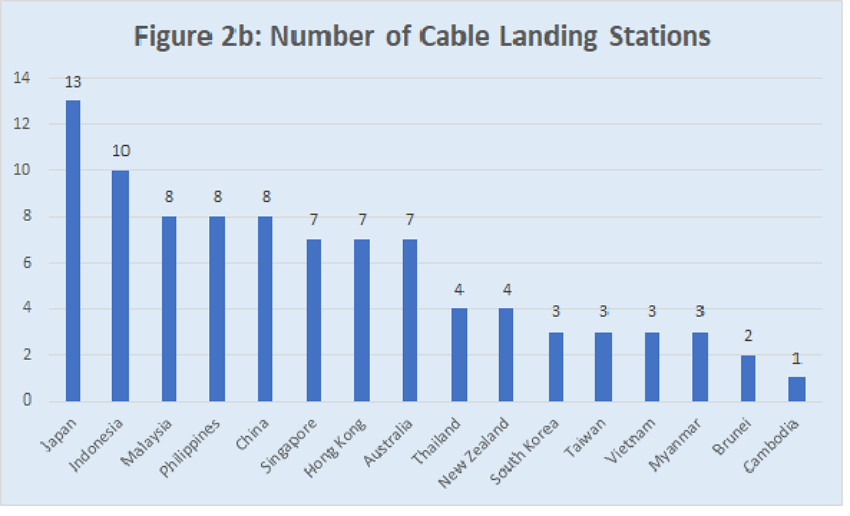 It should be noted that not all the submarine cables in the regions equally relevant or preferred. They also cover varying number of countries, though it has been proven over time that large consortium led cables are more challenging to administer and upgrade to stay relevant in the market. Hence the trend is to built submarine cables with 3-6 consortium members, with each member owning one or more pair of fiber. Another pair of non-submarine cables merits mention that is has gained significant traction and those are trans Europe-Asia cables primarily developed by Russian incumbents Rostelecom and TTK that have extensions to Shanghai, Tokyo and Hong Kong. They offer better latency compared to subsea routes and offer 10G and 100G links at competitive price. In this context Figure 2c depicts the number of countries covered by the submarine cables in APAC. Submarine cables that have been around for 15-20 years are progressively less preferred as compared to new cables that came into operation after 2010. Further submarine cables that does not support 100G wavelengths are set to lose preference sharply in the next 3 years. The leap from 10G to 100G in short span of 2 years have dealt a blow to the viability of 40G upgrades to some of the older submarine cables. These developments could shorten the economic life of some of the submarine cables notwithstanding the operational lifespan if annual maintenance (O&M) charges exceed revenue generated. This Telegeography blog by Alan Mauldin provides an interesting analysis on life expectancy of submarine cables. These considerations will also influence choice of submarine cables where interplay of factors like preferred route and/or route diversity, latency (lower the better), preferred provider, preferred cable landing station, desired backhaul arrangement and intensely negotiated pricing for 1/2/3 year lease or 5/10/15 year IRU. 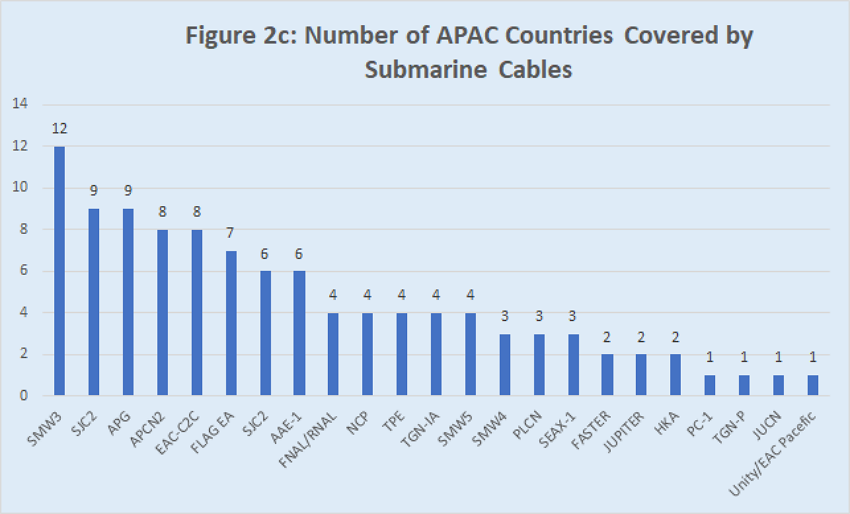 The large community of 44 submarine cables developed over the last 20 years is co-owned and fully-owned by 58 stakeholders as consortium partners and owners as shown in adjoining Figure 3a and Figure 3b. 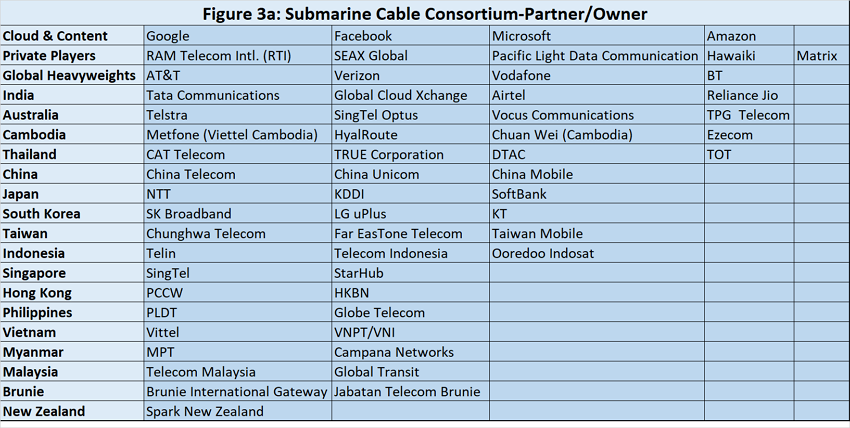 The stakeholders include 41 telco carriers in APAC, global heavyweights like AT&T, Verizon, Vodafone and BT; India centric global carriers like Tata Communications, Airtel, GCX and Reliance Jio; and hyperscale Cloud and Content behemoths- Google, Facebook, Amazon and Microsoft. Refreshingly, it also includes a new generation of submarine cable infrastructure developers like RTI that is lead consortium members in 5 submarine cables and SAEX Global that is developing 3 fully owned and operated submarine cable), that are developing multiple submarine cables. Close to their heels are Pacific Light Data Communication, Hawaiki and Matrix Networks that are focused on one submarine cable each. Over the period of 20 years the telco carriers based on their business plans have invested in multiple submarine cables. Some, particularly the incumbent operators that have enjoyed long tenure of monopoly, have invested more aggressively than others, with the pack led by Telstra.

The most noticeable aspect of the new submarine cables announced post 2015 is active participation of hyperscale cloud and content providers – Google, Facebook, Amazon and Microsoft. Google leads the pack with participation in 7 cables, followed by Facebook in 5 cables, AWS in 3 cables and Microsoft unexpectedly trailing with 1 cable. Certainly a lot more is expected from Microsoft, given they want to leverage their global network a critical level in the war f of cloud supremacy. Participation of these hyperscalers as consortium members, progressively with fiber pair ownership, along with telco providers ensures speedy deployment, a noteworthy improvement considering overstretched delays that most submarine cables faced until 2-3 years back. It also ensures highest capacity and best of technology with upgrade path from 100G to 200G and 400G eventually.

The other noticeable aspect is involvement of a new breed of submarine infrastructure developers with distinctive business model as independent submarine cable system developer, owner and even operator. Some are going the extra mile with full ownership and necessary licenses required in operational territories, while others are banking on license of telco consortium members. These nest gen players are RAM Telecom International (RTI), Super Sea Cable Networks (SEAX) and Pacific Light Data Communication Co. Ltd. (PLCN) and Hawaiki. They are similar to Aqua Coms in Europe and Seaborn Networks in Latam.

Super Sea Cable Networks has a different business model. They are building three privately owned cables SEAX-1, SEAX-2 and SEAX-3. SEAX-1 links Malaysia, Singapore and Indonesia in a manner that allows cross-connect with multiple cable systems at these locations. SEAX-2 connects India (Chennai) and South Africa. SEAX-3 connects Singapore to India (Digha). It aims to offer capacity, spectrum and fiber-pair on these submarine cables. They claim uniqueness in offering capacity breakout in well known carrier neutral datacentres in Malaysia, Singapore and Indonesia. SEAX-1 is scheduled to be operation in 2018. SEAX-2 is scheduled for 2021 and timelines for SEAX-3 is yet to be announced.

While the exciting growth stories are unfolding, operating silently with differentiated pitch are the privately owned submarine cables which essentially means one telco carrier owns and operates the submarine cable. These include well known submarine cables like EAC-C2C owned by Telstra, TGN-IA and TGN-Pacific owned by Tata Communications, FNAL owned by GCX and Pacific Crossing -1 owned by NTT.