Submarine networks carry over 99% of the world’s Intercontinental electronic communications traffic. There is misconception that Satellites carry data from continent to continent. If we ask anyone in the world, 95% of people give answer as satellites carry international traffic. This is absolutely wrong.

The Internet, International communication, Internet of Things ( IoT), 5G & Cloud Networking. Without submarine cable systems, we cannot imagine all these above 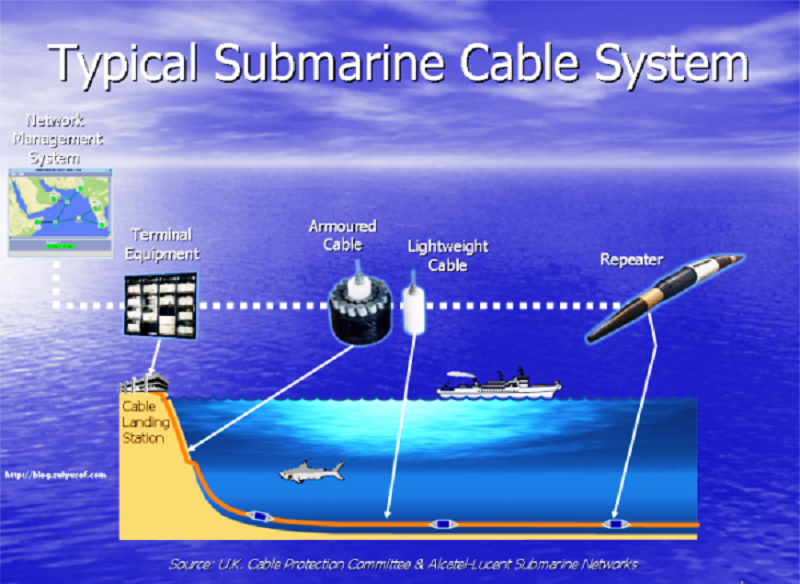 In this article, I would like to brief about Risk Management in Submarine systems. Submarine cable project itself is very risky as it includes million dollars investment for consortium partners or private owner.

There are two types of risks.

What are the Man-made Risks of Submarine Cable System ?

Faults on the submarine system are disruptive, and repairs are time consuming and expensive. It may take minimum 1 to 1.5 months’ time for repair, depends on climate conditions and marine cable ship availability.

How can we protect submarine cable from Man-made Risks ?

The segments most at risk are those at the landing points, close to the sea shore and those in water that is less than 300m in depth.

Cable protection can be done using Automatic Identification system (AIS). A Web based monitoring system protect submarine assets such as electricity cables, telecoms cables, and oil and gas pipelines, creating automatic warnings & alarms if an asset could be at risk due to shipping activity. All marine activities can be monitored 24*7 remotely at Network Operation Centre.

I remember the incident happened in March 2013, Multiple subsea cables experienced cable cuts at Egypt Mediterranean sea includes TE North cable owned by Telecom , Europe India Gateway cable (EIG ) and SEA-ME-WE-4. This resulted in 40% of Asia traffic went down (Entire Pakistan is isolated from rest of world ), Vodafone blackberry services in India was down for more than 8 hrs . As per Egyptian authorities say they have arrested three scuba divers trying to cut through an undersea internet cable. Automatic Identification System ( AIS ) could have saved this.

What are Natural Risks in Submarine cable systems?

Natural risks includes Shark attacks, mud slides, undersea earthquakes, current abrasion , Tsunamis and Cyclones which are unpredictable and can strike any cable anytime irrespective of the history of such occurrences.

In March 2011, The earthquake and its aftershocks and the tsunami resulted in multiple submarine cable cuts that threatening much of the intra-Asia and trans-Pacific telecommunications. The different submarine includes APCN-2, Japan-US CN,PC-1, EAC submarine cables were cut.Cables cuts were also reported on China-US CN and C2C.

In Dec 2016 ,Airtel, Vodafone, Internet Services Hit by Cyclone Vardah.The cyclone in Chennai has impacted one of our undersea network cables, reported by Airtel.

The biggest risk to any cable is bad planning, bad cable design and bad installation methods. Cables that are not designed for the seabed they cross and then the seabed itself with shifting sands, bed rock etc offer no protection. A badly designed cable with minimal protection is a huge risk. When you get people who have no history of cable design and installation getting into the business, then they are asking for trouble.

What are the Business Risks ?

Normally, subsea capacity is purchased as IRU ( 15 yrs ) or leased ( say less than 5 years) by customers like content providers, service providers , etc. They will pay O&M charges for the capacity on yearly basis.

Suppose, if IRU customers do not pay O&M charges due financial crisis or go on bankrupt. This is biggest risk for private owned cable. In that case, the private cable will go bankrupt as has happened multiple times. There are also chances, all customers of the private cable decide to abandon the cable .

In case of consortium, let us say there is only one submarine cable landing in particular country owned by some provider. There are the landing party owner & capacity owner. They decide not to sell back-haul capacity to their competitors? It will be a monopoly then. We can mitigate this by having multiple cables , multiple consortium partners and by open access cable systems . Open access cable system allows any licensed operator in particular country can purchase the capacity.

Risk cannot, of course, be completely avoided, but there are practices to minimize it. Risk Management is going to be the key differentiator between successful and failed submarine cables in the future.