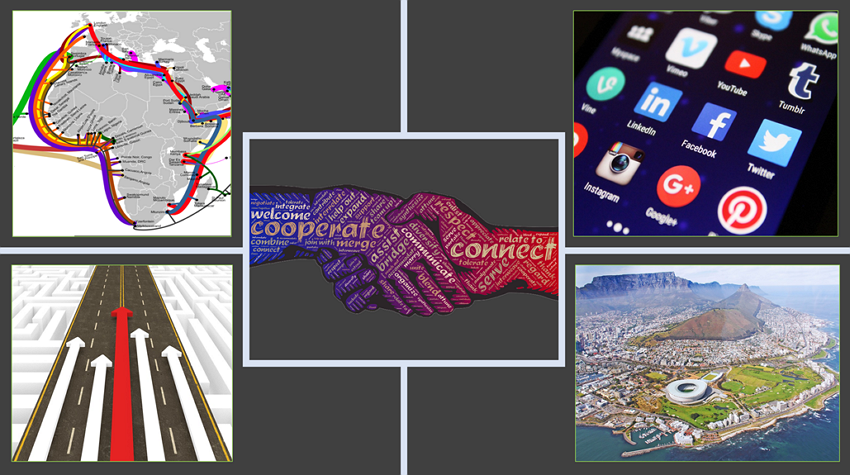 Fiber-count in submarine cables after being static for nearly a decade is set for uplift, with current limit 8 fiber pairs is set to double to 16 pairs in 2019, as consortium members are keen on fiber-pair ownership. The zest to send more light through fibre has reached 20 Tbps per pair, a 20X increase in 10 years. Remotely managing software configurable branching units to add-drop selected wavelengths to /from trunk routes, is creating flexible submarine networks that enables just-in-time capacity scale up or swap traffic over to different path. While many submarine cable constructions are underway in transatlantic and transpacific corridors along with Latam-US, Brazil-Africa and Intra-Asia, the next batch of submarine cable announcements in 2019-20 are expected to cover Singapore-India-UAE-Egypt-France corridor (looks like SMW6!) and Africa-UK.

For Africa, the total consumption of international capacity delivered by submarine cable exceeded 10 Tbps by end of 2017 growing at 56% CAGR (dated report), with South Africa, Egypt, Kenya and Nigeria consuming more than 2 Tbps each, propelled by 500 million Internet subscribers and 200 million Facebook users as on June 2018. However Sub-Saharan Africa hasn’t had a new submarine cable announced for nearly 2-years that’s solely focused on Africa. This is notably different from submarine cables that connect Africa to other countries for them to benefit from trade and commerce with Africa, albeit with asymmetric reciprocity. In the East Africa it’s PEACE (more about China-Pakistan-Africa) and DARE(limited East African coverage), that’s on the horizon. In South Africa it’s SABR and IOX that were announced in 2017 and will be operational in 2019. In West Africa, it’s alliance between Orange Marine and MainOne that will lead to MainOne landing in Cote l’voire and Senegal (read here) and bring incremental benefits of 4th submarine cable. Two other submarine cables, few month away from RFS, is SACS and SAIL landing in Angola and Cameroon. The submarine cable initiatives led by Liquid Telecom and a consortium cable Africa-1 seems to have lost steam or presumably facing funding challenge has not left the drawing board. Though out of Sub-Saharan Africa, Telecom Egypt’s $90M deal to buy MENA cable from Orascom is a significant development for Africa (read here), and more so if the alliance between Liquid Telecom and Telecom Egypt to interconnect fiber network fructifies (read here and here).

In the current context and also as global trend that has become increasingly evident in the last 3 years, a submarine cable without participation of Big-4, Microsoft, Google, Facebook or Amazon, is nearly unthinkable. These cloud and content giants in the trillion-dollar-race are substantially outspending telco carriers on global network infrastructure. As they compete fiercely with each other to increase their datacenter footprint and network edge locations across the globe with new regions and availability zones, to localize cloud and content for enterprise customers and individual consumers alike, their spending is set to soar (for Google read here), along with appetite for multi-terabit capacity that current submarine cables are not able to or even designed to support.

Discussion about a new submarine cable for Africa remains sketchy till is given a name. Inspired by BRUSA and SABR, let’s name it SA-UK or SAUK. Decidedly it needs to be developed along western Africa and follow route similar to WACS. It could have branching unit towards Seixal or Sesimbra in Portugal, as the case is with all the West African submarine cables at present. Portugal Telecom may be forthcoming to finance the Portugal Branching unit, a common practice these days to get connected with submarine cables of interest.

The projected capacity requirement for the Big-4 referred above for Africa in the course of next 10-15 years is highly likely to exceed the design capacity of most of the submarine cables operational today. One other challenge is, most of the submarine cables do not support 100G wavelengths, a basic requirement for Big-4. Further these submarine cables were built 8-10 years back on economics that seem highly bloated at present. While engineered upgrades could bring 100G capability, given the challenge to create shared understanding in consortium builds, it makes such upgrades less practicable. Further the Big-4 prefer to exert command and control and not get entangled in tug-of-war between telco carriers that are consortium members. Hence they would prefer to have majority ownership of SAUK, which in practical terms means, they would want to own fiber-pair(s), which they can light up at their pace of growth and have complete control on capacity activation.

With ownership centric approach for command and control, it would make sense if the Big-4 join hands as they have done for multiple transatlantic and transpacific cables. There is however no precedence of all-the-4 joining hands for constructing submarine cable so far. Hence taking a more pragmatic approach, and going by precedence, Microsoft and AWS are more likely to join hands as they have already set up network edge in South Africa and plan to setup cloud datacentres in 2019 (read here and here). Expectedly Google and Facebook post their partnership for HAVFRUE are likely to finalize plans for setting up CDN nodes soon enough to bring content closer to eyeballs.

There isn’t any precedence for any of the Big-2 going alone for submarine cable built, even though Google is the first non-telco provider to fully own a submarine cable from Chile to Los Angeles – CURIE and has embarked on a similar transatlantic initiative – DUNANT. In all likelihood, there needs to be a licensed provider in South Africa and UK as consortium member to be the landing party for SAUK. For the MAREA submarine cable, Microsoft and Facebook roped in Telxeus as it had cable landing sation in Virginia Beach, US and Bilbao, Spain and it is also the cable system administrator. The recommended South African provider is Liquid Telecom in terms of capability and credibility. This approach is seen other submarine cables too.

The position will considerably less challenging in UK, where provider like Acqua Coms could be a good choice as they land HAVFRUE and other submarine cables in UK and own cable landing stations.

SAUK, stretching from Cape Town in South Africa to London, will span nearly 15,000 Kms and construction cost in 2019-20 will be of the order of $300 million. Comparatively WACS with similar length was constructed for nearly $650 million in 2010-12. Thus with 4 consortium members and 6 fiber pair cable, the contribution from each consortium member will be $75M. However if the Big-2 decide to take 2 pairs each for bigger share of commercial and hence decision making ownership, the Big-2 will contribute $100 million each and the two telco carriers will contribute $50 million each. This seems to be a fair deal with current market benchmark for 15-year 10G IRU is between $0.6-0.8 million, depending on who the buyer is. Quite obviously the strategic negotiators for Big-4 are able to wrestle the best pricing with jaw dropping reductions.

Can SAUK be a direct submarine cable from South Africa to UK. Quite unlikely as design considerations will more it expensive to feed power over such long span. Where should it drop! The likely locations are Angola, Nigeria and Ghana. While Nigeria does not have any incumbent operator, in Angola it would be a formidable challenge to tame Angola Cables that has its ambition for connecting BRICS countries (read here). Landing in Angola is critical as it would give access to SACS+MONET to reach US, though a better option would be SABR+Seabras-1. Lagos/Nigeria and Accra/Ghana are the probable destinations where Microsoft and AWS are likely to setup network nodes in the next 2 years. An Alphabet Subsidiary named CSquared spun out of Google already has high speed reliable fiber network in Ghana, other than Uganda. Other than that it also has AI development unit in Ghana (read here). This bodes well with the timeline to conceptualize and submarine cable and bring to operational readiness in 2-3 years.

This completes the journey of outlining the key building blocks involved in constructing SAUK, a new submarine cable hypothesized to connect South Africa to UK, with participation in any combination of Microsoft, AWS, Google and Facebook. It's a need of the hour. In all likelihood the discussions are underway and public announcement will be made sooner than expected.