In 1994, there were more telephone lines in New York City than there were in the whole of Africa. Over the next two decades, digital transformation picked up speed drastically.

Today, the continent is teeming with pioneers building "digital bridges" within and between villages, countries and continents, as well as connecting Africa to the global economy and research communities.

Yet many parts of Africa continue to play catch-up with the rest of the world in terms of the control and directness of subsea fibre optic connectivity.

This challenge appears to be a colonial artefact, as the continent has arguably faced more geographic, political and economic barriers to its development than other regions. Fortunately, this is about to change, representing a symbolic "Africa first" shift for the continent in terms of its self-determination and autonomy in the telecommunications arena.

For countries in sub-Saharan Africa, it presents an opportunity to leapfrog other countries. For regions outside of the continent, it will offer a more efficient, alternative route for burgeoning internet traffic.

The West Africa Cable System is the most important data conduit for the west coast of the continent. Managed by a 12-member consortium, it provides carrier-level services to operators in sub-Saharan Africa across a dozen countries, including 12 landing points in Africa and three in Europe (Canary Islands, Portugal and England). Running more than 14,000 km — from Yzerfontein to London – the cable system is an essential artery for the digital connectivity and economic development of countries connecting to the cable.

However, for internet traffic to travel between Africa and the Americas (the largest centre for the production and aggregation of digital content and services), it must first go through Europe, a rather inefficient route.

With the South Atlantic Cable System (SACS) expected to be completed in 2018, the first direct link between Africa and South America will be created. A subsea cable extending more than 6,500km between Brazil and Angola, SACS will be 100% owned and managed by an African firm, Angola Cables.

Combined with Monet, a cable system between Brazil and the US to be completed in 2017 and operated by Angola Cables, Algar Telecom, Antel and Google, SACS represents a paradigm shift for Africa and  the Americas in connectivity and collaboration.

The latency — the time lag between a data packet being sent and received — on subsea fibre-optic cables between Angola and Brazil is 350 milliseconds, because of the trafficking of internet via Europe. With SACS, this will be reduced to 63 milliseconds.

Once operational, an African company will be responsible for the digital exchange between Africa and the Americas.

Together with growing terrestrial fibre-optic systems, mobile technologies and satellite services, such a direct connection will improve access for other countries (in the Middle East and Asia, for example) to more parts of the world.

Hubs for telecommunications innovation have blossomed on the continent. With the completion of SACS and Monet, the expansion of data centres and internet exchange points in Africa is expected. Telecommunications and digitalisation are some of the most powerful tools for empowering countries and economies. Mobile telephony has spread further and faster in Africa than any other parts of the world. According to GSMA, a global organisation representing nearly 800 mobile operators and hundreds of mobile technology companies, the doubling of mobile data usage increases annual growth in GDP per person by half-a-percentage point.

Sub-Saharan Africa had 420-million unique mobile subscribers with an average penetration rate of 43% at the end of 2016. The number of mobile broadband connections is expected to more than double to about half-a-billion by 2020.

Smartphone connections have doubled over the past two years to nearly 200-million and mobile data traffic is forecast to grow 12-fold across Africa as a whole over the next five years.

Sub-Saharan Africa now accounts for nearly a 10th of the global mobile subscriber base and is expected to grow faster than any other region over the next five years. With an improved connection between the Americas and Africa, complemented by a strong mobile industry on the continent, social and economic development is expected to improve.

Today, mobile connectivity has become the main platform for innovation and the driving force for greater inclusion, with about 270-million people in the region accessing the internet through mobile devices. In 2016, mobile technologies and services generated $110bn of economic value in sub-Saharan Africa, equivalent to 7.7% of GDP. As local and global connectivity continues to improve, mobile’s contribution to GDP is expected to increase to $142bn by 2020, equivalent to 8.6% of GDP.

The telecommunications/ mobile ecosystem is attracting talent and investment to African technology companies, as well as linking up academic institutions and research and education organisations in other parts of the world.

As trans-Atlantic connectivity improves with the completion of SACS and Monet, universities and other learning communities in Africa, North America and Latin America are increasingly collaborating to improve knowledge sharing. Examples include Florida International University’s Centre for Internet Augmented Research and Assessment, which recently expanded its development of a next-generation internet network to include Africa. 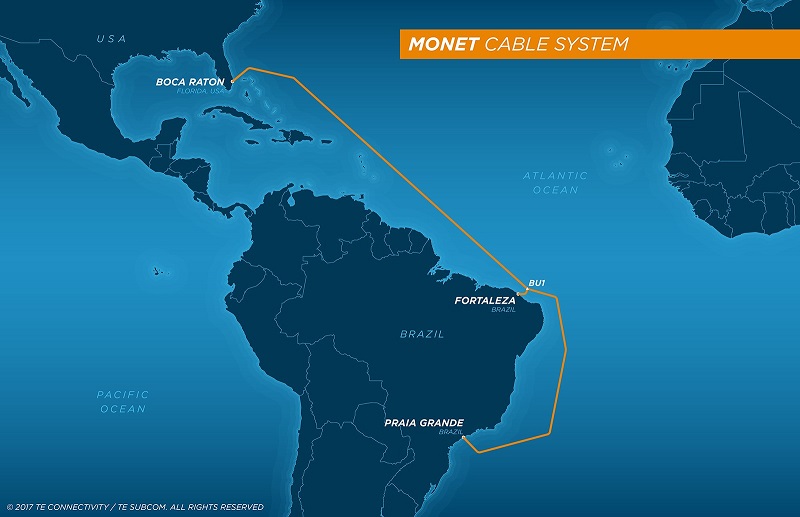 With a project called the AmLight Consortium — comprised of nonprofit organisations, universities and regional research and education networks — the centre promotes the development of advanced network applications, content and services between the Americas and Africa.

This infrastructure will connect with the Atlantic Wave-Software Defined Exchange in Sao Paulo, Miami, Boca Raton and Atlanta. The collaboration aims to provide efficient peering between national research and education networks and communities of interest through a distributed open software define exchange model.

• Nunes is CEO of Angola Cables