Africa is irrefutably one of the most important growth markets globally embracing digital transformation enabled by resurgent economic progress, Internet-literate youth, and growing appetite to assimilate technology led innovations. An easy to correlate index of economic progress is number of subsea cables that connect an African country. With 54 countries recognized by United Nations, Africa has 38 countries that have seashore and 16 that are land locked. Out of these 38 countries that have seashore, 37 countries have at least one submarine cable landing. The lone exception is Eritrea, considering Western Sahara is considered disputed territory.

New subsea cables across Africa will reduce cost of international bandwidth significantly, increase bandwidth consumption, create cyclic demand generation and eventually lead to democratization of broadband Internet access, that has already ushered a new era of education, healthcare, banking in several parts of Africa. It will hopefully narrow the digital divide and allow countries to speed up economic and social development. Thankfully nearly all the countries in Africa today have at least one subsea cable and that opens the gates for communication and collaboration with the rest of the world. This animated GIF provides a chronological history of subsea cables, though it’s not updated beyond 2013. It is however noteworthy that Africa didn’t have any new subsea cable commissioned between 2013 to March 2018. 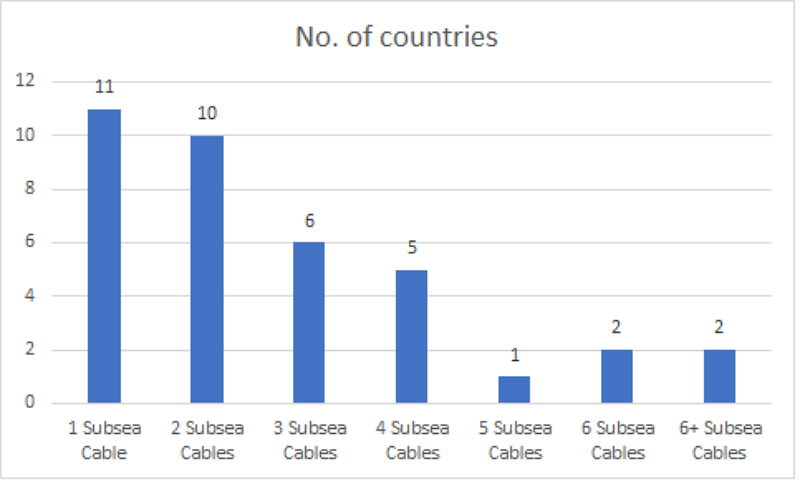 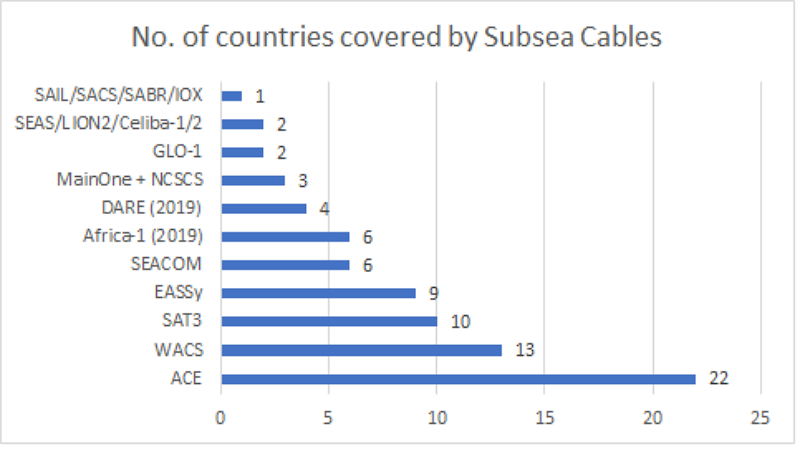 Eastern Africa stretching from Djibouti to South Africa, has 6 countries in the continental mainland and 4 adjoining landmasses with Madagascar, Mauritius, Comoros and Seychelles. The epicenter of subsea connectivity in Eastern Africa is Kenya with 4 operational subsea cables and 4 in planning or construction. Kenya also serves as the gateway to the neighboring landlocked countries of Uganda, Rwanda and Burundi, where OPGW fiber infrastructure from national power distribution company, KPLC, that operates Kenya Power Fiber Optic Network, has played a major role.

However connectivity with Ethiopia still remains challenging. The incumbent, Ethio Telecom is possibly the least cooperative provider in Africa. I wish they change their approach to accelerate progress and prosperity of Ethiopia. This possibly is throttling plans of developing new exit route to Djibouti from Nairobi other than Mombasa, to cross-connect with 8 major subsea cables that have transit landing. It remains to be seen, based on recent developments, if a new route could be built through Somalia to Djibouti.

The primary subsea cables serving East Africa for the last 8-9 years are Seacom and EASSy. Seacom has a unique four segment built with fiber pair lease on TGN Eurasia and TE North to reach Marseilles and Mumbai and TGN-WER to reach London. Further these two subsea cables have unique approach as they are not the traditional consortium built cables. Seacom and EASSy (represented by WIOCC) by themselves are service providers, with licensed operating entity in each of the countries the cables land and have also built cable landing station. While they started off with carrier’s carrier model, but along the way, revised business model to address enterprise customers. Pursuant to enterprise ambitions, both they built terrestrial network capilarity and forged alliance with landlocked countries like Uganda, Rwanda, Burundi, Botswana and possibly South Sudan as well. Another praiseworthy initiative from them in South Africa is to create capacity breakout facility in carrier neutral datacenter, Teraco, in Johannesburg, Cape Town and Durban. The only disadvantage is they don't provide ethernet handoff below 10G. Hence expensive carrier class equipment are needed for SDH to Ethernet conversion. This at times throttles network expansion initiatives.

One other subsea cable that merits mention is point to point subsea cable TEAMS that connects the Eastern Africa to Middle East. It’s a joint venture project between government of Kenya and Kenyan telco operators, who hold 85 percent shares, and UAE-based operator Etisalat, with 15 percent. TEAMS in conjunction with SMW3, SMW4 or IMEWE remains a popular choice to reach London from Kenya and its adjoining countries, and competes with EASSy cross-connecting in Djibouti with SMW3 and hopefully EIG, SMW5 and AAE-1 as well that offer lower latency. Other than this there are 3 short distance and primarily point to point subsea cables - SEAS connecting Seychelles, LION2 connecting Mayotte (overseas department of France) and LION connecting Mauritius, Madagascar, Reunion (overseas department of France).

The interesting thing for East Africa is, there are 6 new subsea cables in the pipe line – PEACE, DARE, Africa-1, Liquid Sea. Gulf2Africa and IOX. These are next-gen terabit capacity cables with 100G wavelengths. I believe Microsoft followed by AWS have already ushered the era of 100G connectivity in Arica with their network edge setup in South Africa for Azure ExpressRoute and Direct Connect, with projected cloud datacenter setup in 2019.

The PEACE subsea cable is apparently positioned to promote business interests of China in Africa. Staring from Pakistan (landing in Gwadar and Karachi), expectedly with terrestrial extension to China, it lands on Djibouti and Kenya. It will understandably provide shortest submarine cable route from China to Africa.Further it is led by Huawei and China-ASEAN Information Harbor Co. Ltd., and does not seem to have any telecom provider as consortium member. The scale of operation and investment that China has lined up for Africa is to some extent evident from their participation in subsea cable builds.

The Gulf2Africa (G2A) subsea cable is projected to connect Oman to Somalia with two landing points in Somalia, with two Somali providers, with onward terrestrial connectivity to Addis Ababa, Ethiopia with Ethio Telecom. It was projected to be RFS in Q4 2016, however confirmed status is not available.

The DARE subsea cable route stretches from Djibouti to Mombasa (Kenya), with branching units to three major coastal cities in Somalia (Mogadishu, Berbera and Bosaso), and with the potential to extend to Dar Es Salaam in Tanzania. It seems to be a Somalia centric subsea cable with 3 landing points controlled by three Somali providers - Hormuud Telecom, Golis Telecom, Somtel International. Hope it will bring economic stability in the strife torn country.

The Africa-1 as consortium built cable has been in the drawing board for some time. It seems to face uncertainty as reportedly funding commitment from all the consortium members is not there yet. Further some providers have questioned the commercial viability for Africa-1, with the reasoning that existing subsea cables have no more than 25% utilization of the designed capacity. In such a scenario, a new subsea cable along the same route could have questionable commercial viability.

Liquid Telecommunications in order to complement its 20,000 Kms terrestrial network from Nairobi to Cape Town has ambitiously launched its own subsea cable, Liquid Sea in 2015, from Djibouti to South Africa. However not much is known about its progress, landing countries or completion status. With subsea cables, it takes off the ground after the contract is signed with the likes of TE Subcom, Alcatel Submarine Networks, Xtera, NEC or Huawei Marine that undertake customized manufacturing of the subsea cable and repeaters based on its unique design specifications.

The IOX (Indian Ocean Xchange) is a point to point private subsea cable from India to South Africa, closely mirrors the route of SAFE. In South Africa it lands in East England and in India it lands in Puducherry. Evidently they plan to build cable landing stations at both ends. Interestingly IOX has formed alliance with Angola Cables and plans to establish connectivity with SACS subsea cable. IOX has also formed alliance with Seaborn Networks that is developing the SABR subsea cable. SACS and SABR are described in subsequent sections dealing with subsea cable systems in Western Africa. To wrap up overview of Eastern Africa subsea cables, it must be noted that not all the new subsea cable builds will be at ease to manage funding. Hence potentially there could be delays or even cancelation of built as some of these subsea cables were initially forecasted to be RFS in 2017-18 and thereafter their readiness it seems is deferred.

Switching from Eastern Africa to Western Africa, that for the purpose of this article stretches from Morocco to South Africa, spanning 21 countries including South Africa and archipelago of Cape Verde. The earliest consortium cable was SAT3 and was commissioned in 2002. Then after a gap of 10 long years came WACS in 2012 followed by ACE in the same year. ACE is primarily controlled by Orange, lands in 22 countries, the largest country coverage in Africa. More importantly it connects several countries in north western Africa as their first subsea cable system unshackling them from dependency on satellite connectivity that stifled affordable broadband Internet access and the associated social and economic progress. The ACE cable is largely controlled by Orange and in-country incumbents where Orange has significant shareholding.

The subsea cable that played the most fundamental role to rationalize the price of international transmission capacity in the growth centers of Western Africa viz. South Africa, Nigeria and Ghana is WACS. While developing end to end IPL pricing on WACS, the providers that are WACS consortium members, prefer to activate wholly owned capacity till the cable station and procure the domestic backhaul from the landing party or other local provider. However in countries like Namibia, Cameroon, DRC this was exorbitantly priced and just the STM1 backhaul could be as high as USD 20,000 MRC or even higher. This throttled many network development initiatives. The reverse of this trend was observed in Nigeria and Ghana with appreciable price rationalization for domesctic backhaul catalized by competitive landscape with 6 and 5 subsea cables landing respectively. One other capacity transaction oberserved frequently is capacity swap betweem WACS and Seacom or EASSy for diverse connectivity along eastern and western routes.

Two other subsea cables that has had significant impact in Nigeria and Ghana are MainOne and Glo-1, both became RFS in 2010. While MainOne terminates in Portugal and thereafer cross connects with several providers for terrestrial connectivity to London, Glo-1 longer by 3000 Kms terminates in Bude, UK. MainOne subsequently colaboated with Camtel and developed a subsea cable extension to Cameroon named Nigeria Cameroon Submarine Cable System (NCSCS). Despite differences in buit capacity pricing on both the subsea cables is nearly the same.

Western Africa has witnessed a unique phenomenon with respect to subsea cables and that’s connectivity to Brazil in South America. The first subsea cable to provide south Atlantic intercontinental connectivity was Atlantis-2 that was RFS in 2000 and landed in Senegal and Cape Verde. The subsea cable is practically outdated currently and largely relegated to be used for switched voice traffic. 18 years thereafter 3 new point to point private subsea cables connecting Brazil are looming large on the horizon with 2 of them scheduled to be RFS in later half of 2018 . These are SAIL, led by Camtel and China Unicom landing in Cameroon and SACS, led by Angola Cables and landing in Angola. The 3rd subsea cable connecting Brazil is SABR, that is led by Seaborn Networks and lands in South Africa. The three subsea cables seem to serve a common objective – to provide an alternate route to reach USA. Angola Cables plans to couple SACS with MONET, while Seaborn Networks plans to couple SABR with Seabras. To complete the overview of the subsea cables in Western Africa, it seems no new consortium builds spanning multiple countries have been announced. Even if they are, the actual build will take 3-4 years.

With this review of subsea cable landscape across Africa, that add up to 50, including 8 that are in planning or construction, will provide robust connectivity infrastructure with multipe options, healthy competitive dynamics and prices progressively moving southwards to accelerate the proliferation of digital economy.