The snaking submarine optical fiber cables resting in the darkest depths of the ocean floor carrying ultra-dense bundles of light signals that are modulated on every parameter of signal propagation that physics has defined, enhancing spectral efficiency, packing more bits per hertz and lowering cost per bit, to deliver incredible transmission capacity between cities, countries and continents. This is unarguably the submerged foundation of digital destiny for everything globalized and digital in business ecosystems spanning connectivity, cloud, content and commerce, that propels innovation for – MORE, endlessly. This article aims to present a brief synopsis of the leading-edge developments in technology and market landscape, take a closer look at the new era of open and disaggregated submarine cable systems, CLS design and characterize Open CLS in light of the new developments. 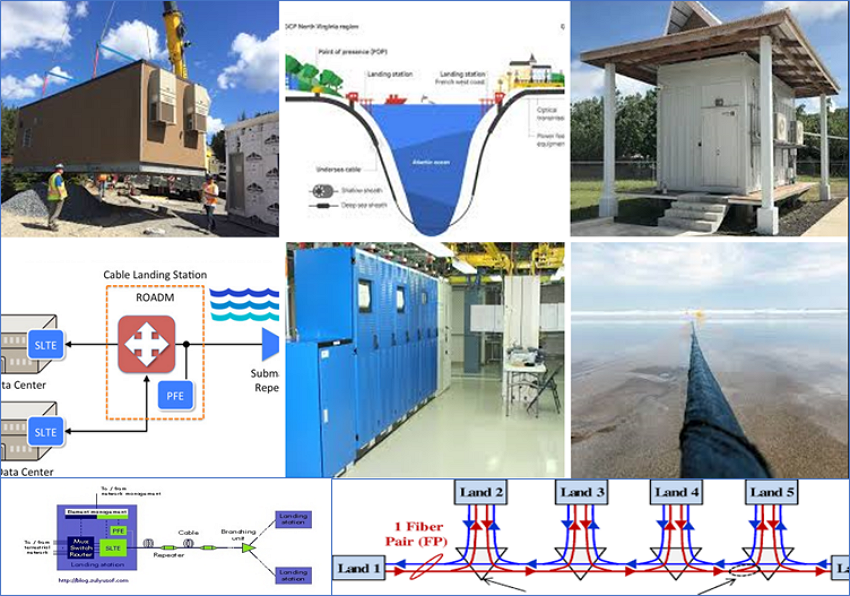 The limit to numbers of terabits for a submarine fiber pair evolved through QPSK(12T/FP) to 8QAM (18T/FP) to 16QAM (24T/FP) and has already reached a peak of 26 Tbps per fiber pair, yet new developments continue unabated. Transpacific 500G wavelength (across ~10,000 kms) demonstrated in April 2019 comes barely 4 months after transatlantic 400G wavelength (across ~6,000 kms) was demonstrated. With the unsurpassable Shannon Limit looming large, new developments have side stepped the maximum information carrying capacity of submarine fiber pairs with innovations in SDM that is incorporated in cable designs coming off the drawing board this year (2019), with the number of fiber pairs clearly scaling to new baseline of 12FP, ready for next leap of 16FP with 24FP cable systems expected in next 8-10 months. Dunant from Google flagged off this journey this month, April 2019. With High Fiber Count or HFC submarine cables becoming reality, the outlook is shifting from capacity per fiber pair to capacity of the overall cable system. It seems plausible that submarine fiber pair will be the new unit of subsea connectivity in the next 3 years with irrefutable influence on terrestrial long haul dark fiber lease/ownership in increasing number of countries.

With these developments, the world of submarine cables is witnessing a golden era. Nearly 20 new cable systems are under deployment with scheduled RFS for 7 major cable systems in 2019 and 8 in 2020. Another 10-15 cable systems are in various stages of planning and expected to reach CIF in the course of next 12 months.

The league of big-4 OTTs in the forefront of new submarine cables is evidently divided in bigger-2 with Google and Facebook participating as full-owner, part-owner or large-capacity-buyer in 22 submarine cables, and the other-2 with AWS and Microsoft trailing with participation in 7 submarine cables. In this context March 2019 update from Telegeography makes informative reading. Hopefully IAX, IEX, Simba, Equianos, TEAS and other yet unnamed cables will find mention in the next update. It also remains to be seen if the much speculated behind-the-scene deals for capacity and/or fiber pair swap amongst the big-4 OTTs to build portfolio of at least three diverse routes will ever come to public forefront. The bigger-2 are also taking an active posture to monetize the submarine fiber pairs after captive requirements are met.

Other than OTTs, the new breed of nearly 15 Independent Infrastructure Providers or IIPs, with entrepreneurial ambitions, have taken the center-stage to develop new submarine cables. Their play varies in terms of size and scale, that translates to appetite for risks and rewards. While the majority are focused on one or two cable systems, the IIP club is led resolutely by RTI that is spearheading a portfolio of 6 submarine cables in Australasia and transpacific, with 5 interconnected cable systems under deployment concurrently. The other noticeable IIPs are Aqua Comms and Seaborn Networks. The marathon of the IIP club is also expected to witness 2-3 dropouts in the next 12 months, where the new ventures are not able to garner funding. Another noteworthy trend is OTTs and IIPs collaborating closely making new submarine cables take off as fully funded initiatives.

The onslaught of the OTTs and IIPs have marginalized the telco carriers and they are either subservient to OTT dictates, enabling them with regulatory cover for cable landing or progressively retreating, barring a handful survivors in Asia. Large consortium cables like Africa1 and SMW6 are expected to be last of its kind. Further the economic lifespan of existing consortium cables expected to be cut short by new batch of OTT and IIP led submarine cables, that have 10X-20X more capacity, provide PoP-to-PoP connectivity and have much less maintenance cost. While the end of telco monopoly in submarine cables is being rejoiced, a word of caution is gaining traction – the OTTs and IIPs should not end up being telco reincarnations creating a new monopoly regime, at global scale.

With the new era of subsea connectivity drowning old paradigms it must be realized that the submarine cables come to life and become meaningfully usable after it makes landfall and terminates in the CLS, that no longer merits explanation as the Cable Landing Station. Globally there are nearly 475 submarine cable systems landing in 1106 CLS that are operational or will be operational by 2021, as reported by Telegeography, in very close to 100 countries. As a handy reference, this link has list of 983 CLS, albeit with questionable accuracy, as it treats all the cable landings in a city to go into one CLS. As the gateway to subsea connectivity CLS plays a very important role in characterising the submarine cable and enabler for new era of hyperscale services.

Submarine cable architecture has historically been segregated in terms of wet plant comprising of the submarine cable and the inline repeaters that stays submerged and the dry plant comprising of the PFE and SLTE that is hosted in the CLS. The PFE is relatively static and provides dual-end or even single-end HVDC power feed to power the repeaters. The SLTE is the epicenter of photonic innovation and usually follows Moor’s Law of doubling capacity every 3-5 years. Thus, with the submarine cable, repeaters and the PFE remaining largely static during the lifespan of the cable system, the SLTE needs to be cycled to enhance the capacity of the cable system. This leads to broad classification of submarine cable systems, as outlined by Microsoft, though generic otherwise.

A CLS in most cases is purpose build with provisions to allow expansion and upgrade for space and power in order to land upto 3 or even 4 submarine cables. This merits some clarification. The submarine cable makes first appearance after landfall in the Beach Manhole (BMH), usually a 4mx4mx3m reinforced concrete enclosure constructed on the seashore with ducts running upstream and downstream. Dimension of BMH is not quite sacrosanct. It could be 4mx3mx3m or even 4mx2mx3m in some cases. For clarity this is single chamber BMH to land one submarine cable.

Traditionally, to land multiple cable systems, multiple independent BMHs were developed in due course of time, with upstream connectivity to the CLS. However as new CLS are developed, the economic considerations of multiple BMH progressively gave way to multi-chamber BMH. The multi-chamber BMH can have 2, 3 or even 4 chambers. Some think this brings shallow seawater spans of submarine cables little too close near the shore and leads to single point of failure. However, with greater awareness of submarine cables and increased focus on preventive measures being implemented including protected marine pathways, the economic viability of multi-chamber BMH that provides readily available cable landing solution has gained traction.

Three critical components of submarine cable landing are BMH, PFE and SLTE. How they are grouped leads to multiple options for cable landing as outlined below –

In counties like India, the telco carriers that own and operate one or more CLS charged a hefty amount as access facilitation charges (AFC) to allow other telco carriers to interconnect with submarine capacity terminating in their CLS. This quasi monopolistic practice has led to long drawn litigation going all the way up to the Supreme Court, that delivered ruling upholding the recommendation of the regulator, TRAI, to significantly reduce the AFC charges and eventually do away with it.

A notable drawback of consortium cables was the consortium members were unable to sell their subsea capacity inventory fully. Thus cable systems in most cases are plagued by suboptimal utilization with lit capacity that rarely exceeds 20% of the design capacity. This is yet another legacy paradigm that is set to change in next 3-4 years with many open cable systems expected to sell its inventory as capacity, spectrum and fiber-pair within 5-years post RFS.

With OTTs expecting more from open cable systems with telco-agnostic CLS for multi-route connectivity for subsea span and terrestrial backhaul, to maximize diversity and resiliency, the role of CLS as point of interconnect between sea and land segment becomes critical. Hence Open CLS has gained attention in recent times that provides choice of submarine cable, type of subsea connectivity service in conjunction with the discretion to choose the preferred backhaul connectivity provider. This calls for characterization of Open CLS and the needed attributes.

Open CLS are operational in developed markets of Europe, US and select countries in APAC notably Singapore, Hong Kong and Sydney. Number of countries with Open CLS will increase, provided the market dynamics are conducive to challenge telco legacy and encourage independent infrastructure providers to develop and operate telco-agnostic networks. Not all countries offer such open market landscape and optimistic growth potential. At the same time some countries stand out uniquely. In India the need is clearly felt to have more than one Open CLS in Mumbai and Chennai. Many interested parties are reportedly working towards it, with completion of planning and designing in 2019 and operational readiness in 2020, so that submarine cables that make landfall in 2021 have more than one option for Open CLS.