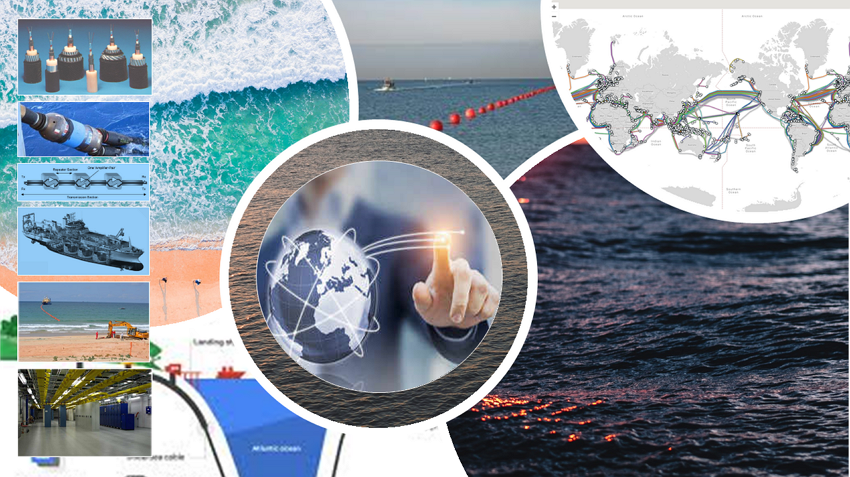 It has now been accepted unilaterally that submarine cables are the backbone of global economy. Sprawled across the seabed, there are more than 350 submarine cable systems spanning 1.2 million kilometers connecting very close to 100 countries. They remain largely hidden for most of their span, yet for inquisitive minds they are truly fascinating from technology, economics and business perspective, for they enable trillions of dollars of trade and commerce everyday. Hence should Submarine Cables not be a relevant topic of discussion in the recently concluded Work Economic Form (WEF) annual event in Davos, for it resonates so well with the event’s long-held objectives - to improve the state of the world by promoting open borders, global cooperation, and free trade. It could be the melting pot for new submarine cable initiatives to be ideated, debated and group of likeminded decision makers identified that are willing to discuss further. This well intended food for though may resonate with the titans of submarine cable systems going forward.

Unarguably, the best thing about submarine cables is - there is no alternative to it. More-the-merrier seems to be the mantra with voracious appetite for data proliferating globally with 4 billion people yet to have Internet access. The all transforming Internet, the international communications that enables every form of globalization, and the data transport superhighways that connect countries, regions and continents would not have been possible without rapid development of submarine cables, in the last two decades. The world of submarine cables is transforming rapidly with data compiled by Telegeography indicating USD 8 billion investments lined up in 2019-21. This article attempts to identify the perceptible trends in submarine cables that are set to unfold in the next 3-years. Interestingly the 3-year window, 2019-21, will only lead to service readiness for cable systems that have left the drawing board in the last 3-years or few that will leave the drawing board this year, 2019.

2 (a) OTTs most visibly include Google, Facebook, Amazon, Microsoft and others in that category of cloud and content providers. For OTTs, aggressive venture with submarine cables is primarily an economic decision related to the scale of bandwidth usage and its growth trajectory, where it proves to be more cost-effective over a span 10-15 years, to build wholly-owned or co-owned cable systems. It also provides the independence to steer the design specifications, and adopt new technology innovations at never before speed and scale. Noticeably Google and Facebook are more aggressively investing as compared to Amazon and Microsoft, though the later two are expected to up the ante and announce participation in new cable systems. Interestingly OTTs are facing criticism for monopolizing submarine cables market, involving telco carriers very selectively or rather selfishly and making them subservient which defeats the purpose of democratizing cable systems to benefit a wider community of capacity consumers. This criticism it seems could breathe new life to consortium cable systems led by group of telco carriers, that has been looked at skeptically for not being flexible or amenable to open access cable systems.

2 (b) While “OTT” as terminology is well understood, its time Independent Infrastructure Providers or “IIP” also gains similar familiarity for the new era of submarine cable leadership they have ushered. The IIPs are not legacy telco carriers and only focused on providing subsea connectivity in a manner that does away with the challenges faced earlier. IIPs are developing submarine cables with distinct geographic focus and at speed never seen before with consortium cable builds. The differentiating factor or IIPs is, they are led by highly recognized industry veterans turned maverick entrepreneurs. There is however a clear demarcation emerging, that of Tier1 IIP and Tier2 IIP. Tier1 IIPs include RTI, Seaborn Networks and Aqua Comms that are developing multiple transoceanic cable systems. Following their heels are nearly 12 Tier2 IIPs, that are focused on smaller geographic footprint or one subsea route. Collectively they developing nearly 30 submarine cables. While 5 cable systems are operational, the rest are expected to be RFS from Q4 2019 onward, reaching a crescendo by Q4 2020, with some lined up for 2021. Some of the Tier2 IIPs seem to slip in raising funds, arrange financing or facing other challenges thereby raising apprehension on submarine cables they are developing.

2 (c) OTT players and IIPs individually, jointly and in consortium with telco carriers are set to own, co-own and operate nearly 40 submarine cables by end of 2021. OTT players other than the top-four that have been apparently dormant so far along with new IIPs armed with equity investment are expected to join the race to build new submarine cables in 2019-20. A notable aspect in this context is, OTTs and IIPs in most cases seem to get along very well, possibly because the OTT players are also IIPs in their own right. This shouldn't give an impression that telco carriers will loose their relevance. While there are indications of withdrawal of telco carries in US and Europe, in other geographies they continue to play an activity collaborating closely with OTTs and IIPs.

Collaboration between OTTs, IIPs, Tier1 telco carriers, datacenter providers and backhaul network providers will continue to transform the subsea connectivity landscape faster than ever before. Technology innovation from submarine cable systems vendors like SubCom, ASN, NEC and Huawei Marine in conjunction with likes of Ciena, Infinera, Xtera and Acacia will also play a major role. It’s worth revisiting these trends in Jan 2020 and evaluate how many and to what extent did they come true. I would also urge the domain experts of submarine cable ecosystem to provide comments on these trends with agreement or disagreement. The fascinating world of submarine cables propelled by marvels of technology in transoceanic optical transmission that lies hidden on the ocean floors enduring harshest conditions for as long as 25 years is projected to be worth $23 billion by 2023, and will make its unmistakable mark in the face of digitally transforming global economy.