Africa-1, after a long time, is a large-span telco-consortium led transcontinental submarine cable system primarily focused on East Africa, tough anchored to Europe and Asia. It’s a “T” shaped cable system from Karachi (Pakistan) to Marseilles (France) with a branch to East Africa starting close to Somalia in the horn of Africa, that goes till Mtunzini (South Africa) with branches enroute. Deviating slightly, Marseilles has gained iconic status with respect to termination point of submarine cables landing in Europe and is referred interchangeably while referring to France. This article takes a closer look at Africa-1 architecture, connectivity options it will bring, relevance with respect to other cable systems - existing and under construction, challenges it's likely to face and the difference it will make to the connectivity landscape of East Africa. 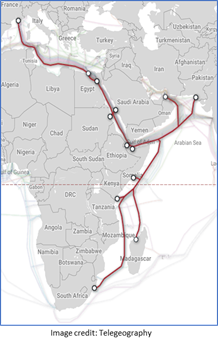 Africa-1 will be operational 12 years after SEACOM and EASSy were commissioned in 2009 and 2010 respectively. While SEACOM and EASSy have similar route to Africa-1, there are notable differences too. SEACOM is essentially a 3-segment cable system. The East African segment is owned and operated by SEACOM, while it has leased fiber pair in TGN-Eurasia for Egypt to India from Tata Communication and fiber pair in TE-North for Egypt to Marseilles from Telecom Egypt. Thus the three segments are managed by different parties and that could possibly have operational overheads and restrictive with respect to upgrades. EASSy extends till Sudan, though the preferred approach is to interconnect with other cable systems in Djibouti for reaching Marseilles and other European destinations. Thus EASSy is predominantly used for connectivity from South Africa to Djibouti. However what works in favor of SEACOM and EASSy is the extensive terrestrial fiber infrastructure they have developed along East Africa that also extends subsea connectivity to 12 landlocked countries. The 5 African telco carriers in Africa-1 consortium are not known to have noteworthy terrestrial fiber footprint except possibly MTN Group in South Africa and Airtel in Kenya and Tanzania. 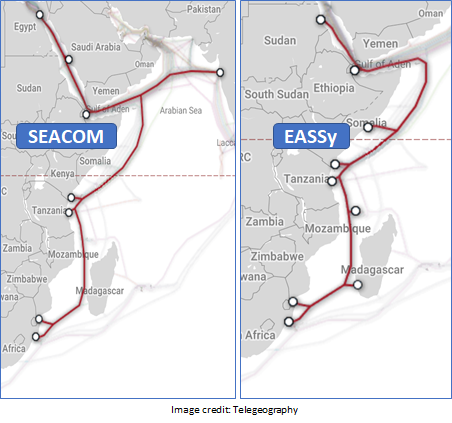 The absence of Liquid Telecom in the consortium is noticeable. They made an ambitious start 2-years back to develop submarine cables and conceptualized a cable system Liquid Sea. However they have not had vocal presence in the submarine cable community lately. It’s possible that they are more focused on developing their pan Africa terrestrial fiber footprint in 2019 to unmatched supremacy bridging the long awaited east-west divide with terrestrial connectivity from Nairobi to Lagos. With that as their key strength and differentiator refocus on submarine cables in 2020. That for sure is an interesting strategy and they seem to be making rapid progress.

Further Africa-1 consortium does not have Google or Facebook that were expected to join. The murmurs in the market was stronger for Facebook. Literally an unthinkable option these days with respect to submarine cables. Given the Construction and Maintenance Agreement was signed in December 2018, the consortium is finalized and the deal is signed. That would mean Facebook has to go solo and rope in African telco and that credible contenders would be Liquid Telecom and MTN Group.

One of the noticeable exception with Africa-1 is that it does not span east beyond Pakistan, and remains isolated from India and South East Asia. Arguably this could restrict its usefulness and alienate if from a crucial addressable market that has 50% of the global wireless broadband customers and attract nearly $8 billion in investment for new submarine cables. However there does exist options to interconnect with SMW4, AAE1 and SMW5 that land in Karachi. Interconnect with SMW5 could be challenging as it lands with TransWorld Associates. While Pakistan by itself may not have appreciable connectivity requirements to Africa in the foreseeable future, it could play a critical role to interconnect Africa-1 with PEACE, that will provide two diverse subsea routes from Pakistan to South African countries and even to Marseilles.

The cable landing arrangements of Africa-1 could highlight interesting industry dynamics. While Marseilles offers abundant cable landing options, so does Telecom Egypt for overland transit in Egypt albeit with monopolistic millions that they have been charging and paid historically and helplessly by cable consortiums. Djibouti Telecom in Djibouti is the partner in crime being the only option for cable landing. Sudatel, STC, Etisalat, Telma and PTCL have their CLS in Sudan, Saudi, UAE, Madagascar and Pakistan and would as the landing party add another submarine cable to their inventory. It is however not clear how does the cable landing arrangement work in Kenya, Tanzania and South Africa. Alliance with SEACOM or EASSy is largely ruled out, and the reason is interesting. In case there is alliance with SEACOM for CLS sharing, it would promote Africa-1+EASSy for diverse routes and vice versa if EASSy joins the game for CLS sharing. In South Africa, it is expected that MTN Group would take the lead to construct new CLS in Mtunzini, given they are already constructing one in Cape Town for ACE. In Tanzania alliance with incumbents TTCL and Zantel is the only option as none of the consortium members are licensed operators in Tanzania. For Kenya, it gets really interesting. With SEACOM and EASSy ruled out, it remains to be seen if Africa-1 consortium would join hands with PEACE and DARE1 to jointly construct a CLS led by Airtel, the only member of the Africa-1 consortium that is licensed in Kenya. It remains to be seen if the two acquisitions being talked about – Tigo acquisition of TTCL and Airtel acquisition of Telkom Kenya reach the finishing line and if that will have any impact on cable landing arrangements.

The usefulness of a submarine cable is closely related to ease of access. This has led to submarine cables landing directly inside datacenters that are being judiciously constructed 5-10 kms from the seashore. However with technology enhancement like GeoMesh from Ciena, that allows PoP-to-PoP submarine cables with SLTE hosted in datacenters even hundreds of kilometers from the seashore and reducing overall equipment complexity. However it is too early to expect such arrangements in Africa and Africa-1 will land in CLS close to the beach and the landing party will monopolize the backhaul connectivity. Thus Africa-1 it seems remain short of a carrier neutral open access cable system.

Africa-1 primarily adds to the count of diverse routes available for subsea connectivity corridors. That’s true for most of the new submarine cables under planning or construction globally. The ever increasing need for diverse routes primarily led by cloud content behemoths will feed the insatiable appetite for new submarine cables for the next 5 years. The trend will possibly flatten only after 6 diverse subsea routes are available. The subsea routes that Africa-1 is expected to address is Fujairah-Marseilles, Jeddah-Marseilles, Djibouti-Marseilles, Mombasa-Marseilles and Mtunzini (South Africa)-Marseilles and Mtunzini-Djibouti. The Djibouti-Marseilles route is expected to be an attractive route going forward as some of the submarine cable systems in planning target to terminate cable system in Djibouti and expect new cable systems to come up for capacity, spectrum or fiber pair lease from Djibouti to Marseilles. However Africa-1 being a consortium cable, the individual consortium members have the independence to decide how best they want to monetize their capacity inventory. 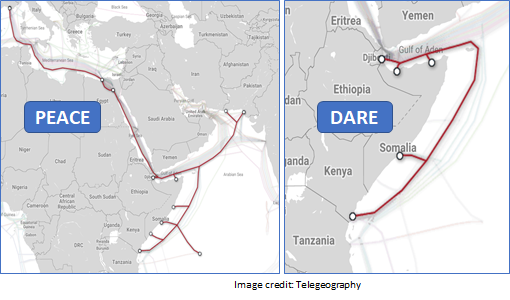 In Africa, Africa-1 will face some competition from two new cable systems under construction – PEACE and DARE1. PEACE is on steady track for RFS in Q1 2020, at least 2 years ahead of Africa-1. However PEACE does not span south beyond Kenya, though they seem to have plans for Phase2 for extension till South Africa. The completion of Phase2 could be coterminous with Africa-1. Else China Telecom could facilitate extension of PEACE from Kenya to South Africa over Africa-1.

Commercially the 20,000 kms cable system would cost nearly $600 million. With equitable contribution, whose practicality is arguable, each of the 15 consortium member would contribute $40 million. Considering it would be 8-fiber-pair system, though some news articles anticipated it to be "at-least" 3-fiber-pair system, with 120x200G technology, makes it a 192 Tbps cable system. This of course is the maximum design capacity that practically will never be reached. None the less it’s a good marketing ammunition to create awareness. Thus each consortium member will be entitled to 12.8 Tbps. Of course to start with no more than 10% of the design capacity is actually activated with successive upgrades and capital infusion to light up more capacity. It is at this stage that consortium members not having upgrade requirements are forced to pay for upgrades, unless the C&MA has crafted provisions to safeguard interests of unwilling consortium members. Thus initially every consortium member will have 1.28 Tbps. It remains to be seen which consortium members succeed in selling bouquet of 100G links to Facebook, Google, Microsoft and Amazon that prized customers that every carrier with submarine capacity inventory goes after. Hold on, why are we talking capacity for a cable system scheduled for RFS in 2021. Does Arica-1 not intend to offer next gen services like spectrum and virtual fiber pairs as a service that the OTT providers are increasingly going for. While these services are yet to gain relevance in Africa in 2019, they will certainly be in demand in 2021-22 and beyond.

With several unanswered questions, Africa-1 has commenced its ambitious journey of twenty thousand leagues under the sea. Hopefully the turnkey supply and deployment contract with the submarine cable system suppliers - SubCom, ASN or NEC, will inked soon, followed by marine survey, and design and manufacture of the cables and the repeaters, and the rest of the deployment journey. The subsea connectivity landscape in Africa will be quite different when Africa-1 becomes RFS in 2021 with roaring growth of cloud services, content moving closer to consumers and soaring wireless broadband subscribers consuming more data and streaming video. There will also be more submarine cable systems under construction or nearing completion, creating healthy competition, narrowing the price differential with respect to Europe and Asia. That’s the true Digital Africa the economic, social and even political character of which will be deeply influenced by Cloud, Content and Connectivity, and Cables i.e. submarine cables like Africa-1 will strengthen the foundation for accelerated digital progression.