There are now the following subsea cable systems in or acroos South Pacific, connecting Asia, Australia, New Zealand, the South Pacific Islands, and the United States.

Southern Cross Next (under construction)

The Pacific Fibre is expected to be ready for service in 2014.

Unfortunately, the Pacific Fibre has ceased operation as at 1 August 2012, citing an inability to raise enough investment to fund the cable build.

Optikor Network is a new trans-Tasman submarine cable system connecting Sydney, Australia with South Island and North Island, New Zealandlink, with a cable length of more than 3000 km. The trans-Tasman Optikor Network is designed to provide initially a capacity of 120 Gbps with 1 fiber pair, and eventually 6.4 Tbps with 2 fibre pairs.

Axin Limited initiated the trans-Tasman Optikor Network in September 2011. Axin Limited, founded in 2010, is fully invested by the Sino Telecommunication, and plays major role in the national broad band project of New Zealand.

The trans-Tasman Optikor Network is expected to be ready for service by the end of 2013.

This  trans-Tasman Optikor Network will address the large capacity requirements in the Tasman region and bring competition to the capacity markets in Australia and New Zealand where are now dominated by the Southern Cross Cable Network and the undergoing Pacific Fibre.

The TGA cable system lands at:

The TGA cable system was supplied by Alcatel Submarine Networks (ASN), with a total cost of about US$70 million.

The TGA cable system was ready for service in March 2017. 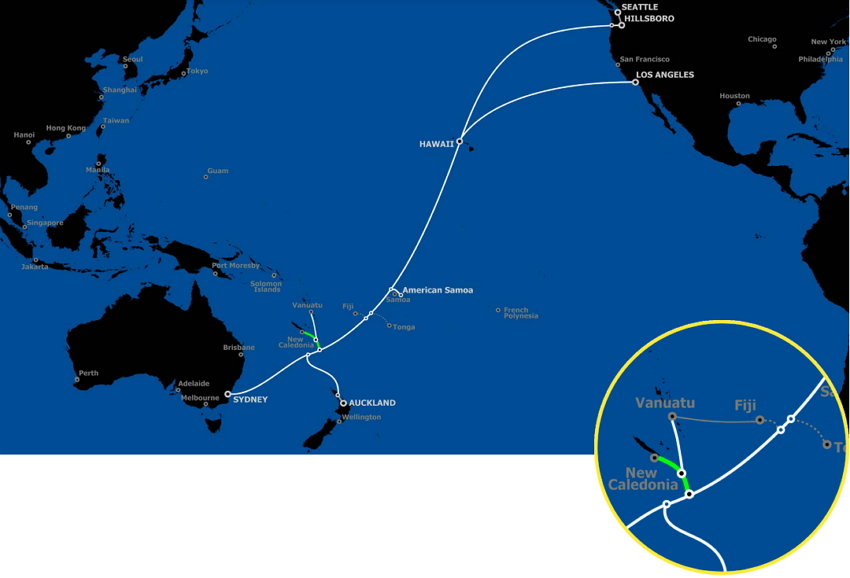 The Manatua cable system is a 3700km, 2 fibre pair system connecting Samoa, Niue, Rarotonga and Aitutaki in the Cook Islands and Tahiti and Bora Bora in French Polynesia. Each fibre pair is capable of operating at up to 10 Tbps. It is the first fibre connectivity to Niue and the Cook Islands.

The Manatua Consortium is composed of:

The Manatua submarine cable system is supplied by SubCom,  to be ready for service in May 2020. 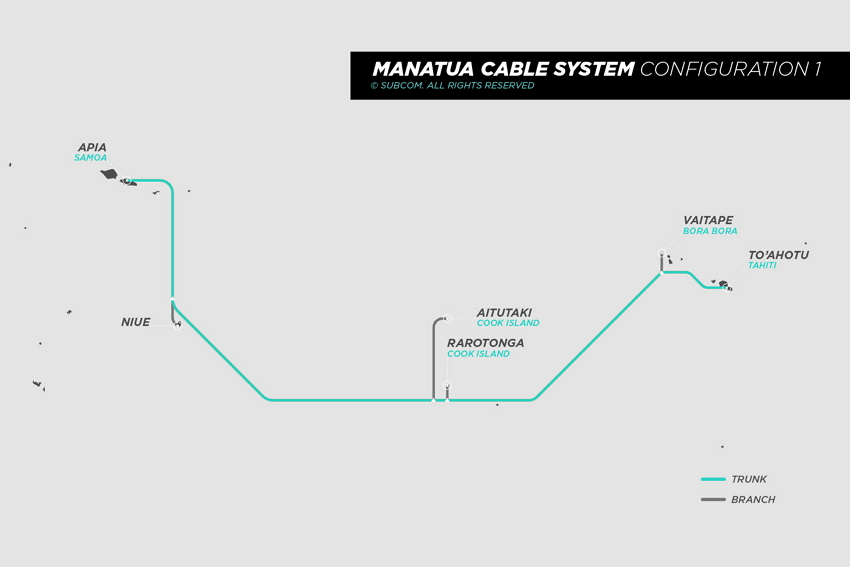 The Gondwana-1 submarine cable system is owned and operated by the incumbent government-owned carrier in New Caledonia, OPT.

The Gondwana-1 submarine cable system consists of two parts, the main segment linking New Caledonia to Australia, and a short unrepeated segment from New Caledonia to the Loyalty Islands, with a landing stations at Poindimie (Main island), Mouly (Ouvea) and Xepenehe (Lifou).

The  Gondwana-1 submarine cable lands at the following site: 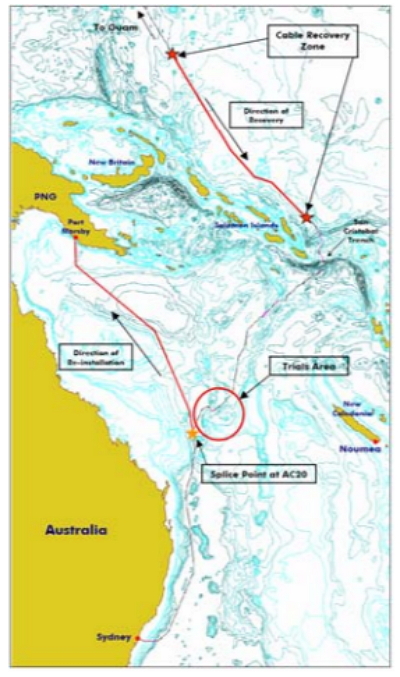 The APNG-2 is a 1800km submarine cable linking Papua New Guinea directly to Australia and indirectly to New Zealand and the rest of the world. The APNG-2 cable system was ready for service late 2006.

The APNG-2 cable lands at:

The APNG-2 cable system was built by recovery and reuse of an 1,800 km section of the PacRimWest cable, which was recovered from just south of Guam, with the ship sailing towards the Solomon Islands.

The ship then recovered a loop of the PacRimWest cable off Rockhampton, Queensland, broke it, and spliced it to the Sydney end of the recovered 1,800 km section, sailed towards PNG, made landfall at Ela Beach near Port Moresby, where a terminal station from Guam was re-established to link to the Telikom PNG network.

PacRimWest is a fibre-optic cable with two fibre pairs. These were used to provide APNG-2 with around 1100 Mbit/s data capability, consisting of 2 x 565 Mbit/s PDH systems with all electronic regeneration.

The cost of the APNG-2 cable system would be about US$60million, it was finally about US$11million. Reuse of the PacRimWest cable saved about 80% of the cost of a new cable.

PacRimWest was a twin-pair 560Mbit/s optical submarine cable connecting Australia to Guam, for a total length of 7,062km.

PacRimWest was constructed in 1994 and was came into service on 31 January 1995.

PacRimWest was designed to have an operational life of 25 years, but it was decommissioned from service in 2005.

After decommissioning in 2005, the PacRimWest cable was cut near the Solomon Islands and relaid to form APNG-2 in 2006 connecting Sydney and Papua New Guinea, saving PNG around 80% of the cost of building a new cable and plant with the equipment from the Guam landing station being moved to PNG.

The article by  Alcatel Submarine Networks demonstrated the recovery and reuse of PacRimWest cable for APNG-2.

The Tonga-Fiji Submarine Cable System is owned and operated by the state-owned Tonga Cable Limited (TCL), which was set up in 2011 to develop, and manage the submarine cable with financing support by Asian Development Bank (ADB) and the World Bank.

TCL signed a single (turnkey) contract valued at $18.8 million to install the international cable between Tonga and Fiji—lower than the estimated contract value of $26.2 million. By project completion, the final contract value had increased to $21.4 million to cover the purchase of additional cable equipment needed for installation. The original works were completed on time and within budget, with a saving of $4.58 million, of which 49.9% ($2.28 million) was ADB’s and 50.1% ($2.29 million) the World Bank’s.

The Tonga-Fiji Submarine Cable System is supplied by ASN, ready for service on 21 August 2013.

With the saving of $4.58 million and additional fund of $7.0million by the Tonga Government, the Tonga Cable was extended domestically from Tonga Isaland to Vava’u (additional 348 km) and Ha’apai (a further 58 km), at a total cost of about $11.0 million. To fund the Tong Domestic Cable Extension (TDCE), the government of Tonga sold 16.7% of TCL shares to Digicel Tonga Limited (Digicel) for $4.2 million. The Tonga Domestic Cable Extension was also supplied by ASN and ready for service in January 2018.