Africa is irrefutably one of the most important growth markets globally embracing digital transformation enabled by resurgent economic progress,

The map below depicts a full and colorful picture about African Undersea Cables. 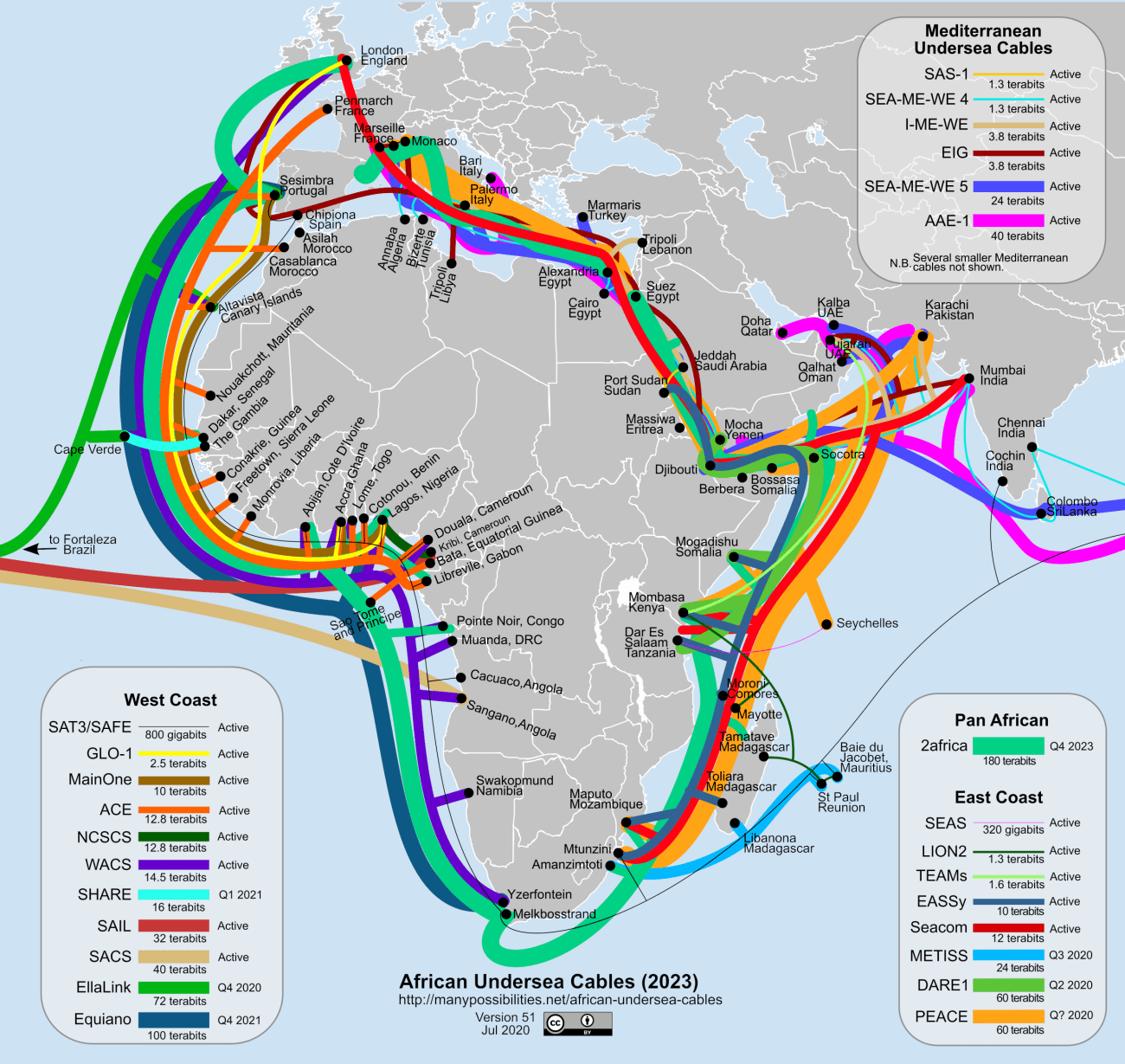 There are also excellent insights and summary on submarine cables business in Africa in the following articles:

Djibouti is a significant location for submarine cables running through the Asia, Africa and Europe corridor or connecting the East Africa.

Subsea cables landing at the YAC A CLS:

Launched commercial operations in 2013, the DDC is a carrier neutral data center in Djibouti. The DDC building is adjacent to the Haramous CLS, and connected by diverse dark fiber paths to the Haramous CLS and the YAC A CLS,  connecting all transoceanic and regional cable systems landing in Djibouti. Backhaul to any subsea cable head can be ordered directly from the DDC, although it is provided by Djibouti Telecom.

There are now 6 submarine cables landing in Kenya, including:

The geographic position of Egypt allows for an efficient crossing from the Red Sea to the Mediterranean Sea for submarine cable systems.

Telecom Egypt (TE) is Egypt’s only fixed network operator, owns and operates the TE Transit Corridor (or Trans-Egypt) infrastructure, which comprises the terrestrial infrastructure linking the Red Sea to the Mediterranean Sea, over multiple diverse and redundant routes. Additional terrestrial routes over the Sinai Peninsula add to the unique resilience of the TE Transit Corridor and favourable submarine cable build economics by avoiding shallow waters.

Telecom Egypt is pursuing its plans to boost its international infrastructure by building new landing stations on the Mediterranean and Red seas that will be connected via new diverse terrestrial and subsea crossing routes. This has grabbed the attention of more and more global and international telecommunication players. Today, Telecom Egypt owns and operates 10 diversified terrestrial Trans-Egypt crossing routes which connect all landing stations on the Red and Mediterranean Seas. Telecom Egypt carefully selected the locations of the new landing station facilities, and accordingly built them with especially tailored specifications, and with further expansion plans in mind.There are now 10 submarine cable landing stations in Egypt, 5 on the coast of Mediterranean Sea and 5 on the coast of the Red Sea.

As of June 2022, there are now 15 in-service submarine cables connecting Egpyt (some with multiple subsystems), and another 5 cables under construction which include 2Africa/HARP/EMIC-1, Africa-1, IEX, Medusa and SMW6. And there are also Trans Border Terrestrial Cables to Libya, Sudan and Jordan.

The Port Said CLS and the Ras Ghareb CLS are new cable landing stations which Telecom Egypt builds for 2Africa cable system and other new cables, to provide brand-new terrestrial crossing routes linking the Red Sea and the Mediterranean Sea, the first in over a decade. Notablely, 2Africa will land at four Cable Landing Stations in Egypt that were selected precisely to assure physical and geographical diversity. On the Mediterranean side, 2Africa will be landing at the Port Said CLS, which is located 250 km east of the Alexandria CLS. On the Red Sea side, in addition to land at the new Ras Ghareb CLS which is located 100 km south of the Zafarana CLS, 2Africa will land at the Zafarana CLS and Suez CLS as well. The Ras Ghareb CLS and the Port Said CLS are connected with two new and diverse terrestrial routes with the deployment of next generation fibre, the routes will be in vicinity with the Suez Canal from Suez to Port Said, and will be complemented with a third new marine path linking Ras Ghareb and Suez landing stations.

In March 2021, Telecom Egypt and Suez Canal Authority, in coordination with the Armed Forces Signal Corps, signed an agreement to create the new Egypt crossing terrestrial cable route for fiber optic internet cables between the Red Sea and the Mediterranean through Al Morshedeen Road.

Goolge's Equiano cable lands at Melkbosstrand CLS in a partnership with Telkom as the landing partner.

Cable landing stations on the East Coast of South Africa:

Cable landing station on the West Coast of South Africa:

There is also a submarine cable connecting Kribi in Cameroon to Lagos in Nigeria, the Nigeria-Cameroon Submarine Cable System (NCSCS). The NCSCS is owned by Cameroon Telecommunications (CAMTEL), in a partnership with MainOne to land the NCSCS cable at MainOne's Lagos Cable Landing Station.

According to ASCON, Nigeria has used less than 10% of its five submarine cables capacity as of early 2019.

The Association of Submarine Cable Operators of Nigeria (ASCON) was inaugurated on 10th December 2018, aiming to create a national advocacy forum for Nigerian companies and administrations that own and/or operate submarine telecommunications cables landing in the country.

The Principal objective of the ASCON is to:

Members, Board of Trustees of ASCON include

The Executive Council of ASCON is made up of: